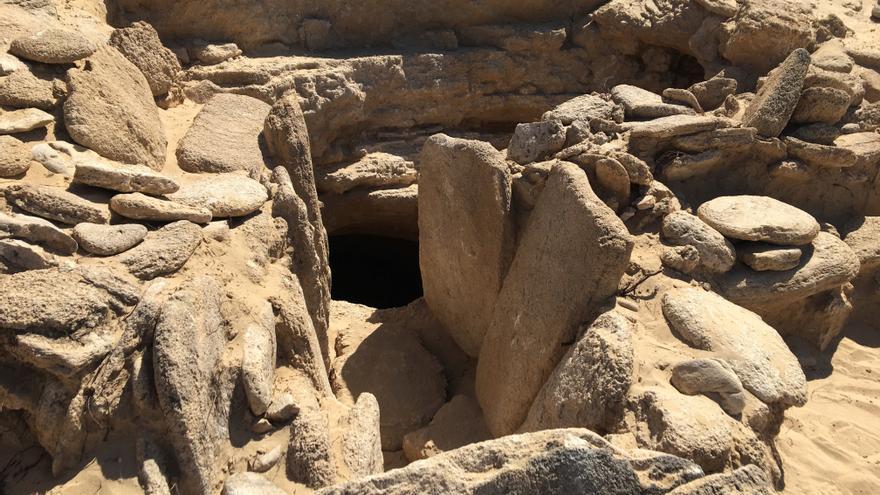 Cádiz, May 20 (EFE) .- The dunes that surround Cape Trafalgar, in Cádiz, continue to give surprises about what they have protected, and hidden, for thousands of years and, after the recent discovery of some Roman baths, they have now known the finding of an intact Bronze Age tomb, with human remains and grave goods.

The discovery of this megalithic tomb, with an artificial cave that leads to a circular burial chamber carved out of the rock at a depth of about three meters, is a symbol that some 4,000 years ago the landscape must have aroused as much admiration as the one that leads each year to thousands of tourists to walk through this area of ​​the coast of Barbate.

“They must have felt that it was a special place to bury their loved ones,” explains Professor Eduardo Vijande, who has been in charge of this excavation with the team from the Prehistory Area of ​​the University of Cádiz.

The chamber has been found intact, as it has not been opened since the funeral deposition.

In it were the complete skeletal remains of an adult woman in very good condition, along with ornaments such as green necklace beads or made with shells, two small gold earrings and a bone comb.

In the corridor leading to the chamber, multiple ceramic pieces and bone remains of at least five individuals have been found in an ossuary, also in a very good state of preservation.

Its state is exceptional, both that of the tomb and that of the remains, something that will allow interesting studies to see the kinship of the individuals buried there, to know their diet and to specify more exactly the dates on which the burial was open.

The finding and the characteristics of this tomb suggest that the Trafalgar Tombolo was a necropolis and that in the surroundings there are probably more burials resting under the sand of the dunes, an element that has facilitated the conservation of these remains.

The tomb has been discovered about five hundred meters from the place where an archeology team from the University of Cádiz led by Darío Bernal recently found, also under some dunes, a thermal complex from Roman times, dating from between the 4th and 5th centuries after Christ. , in an exceptional state of preservation, with a structure almost four meters high.

Darío Bernal and his team, who are developing the “Arqueostra” research project in the area, alerted their colleagues from the Department of Prehistory of the UCA about the discovery in the area of ​​some ceramics that appeared to be prehistoric.

Eduardo Vijande then remembered that in 1998, as a student, he stopped during an investigation next to some four stones at Cape Trafalgar.

After the call now from his colleagues, the UCA Prehistory team returned to the place and quickly, after cleaning, observed that these stones were only the visible part of a corridor excavated about a hundred meters from the sea and that led to a burial chamber between two and three meters in diameter.

After the excavation, the find will be buried in sand again, like the Roman baths, at least temporarily, while studying the possibilities of leaving these remains protected and in public view.

“Under the sand is the best way to protect them, so they could stay another four thousand years”, says Juan Jesús Cantillo Duarte, coordinator of the Laboratory of Archeology and Prehistory of the UCA.

The Andalusian Minister of Culture and Historical Heritage, Patricia del Pozo, explained today in her visit to the site that, according to the technicians, covering them preventively is not incompatible with any future enhancement or conservation project that may be proposed. .

In fact, Del Pozo plans to speak with the owners of the land (the State and the Environment) about a possible musealization and creation of a cultural and heritage circuit.

The counselor has assured that the Board, in addition to authorizing one more year of excavations in the area after the summer, will initiate the procedures to protect the Roman baths, the monumental tomb of the Bronze Age and the sinks of a salting factory, also from Roman times, which were discovered earlier.

For the rector of the UCA, Francisco Piniella, these findings show that Cape Trafalgar “for thousands of years” is “an incomparable natural paradise that has attracted peoples over the centuries and that has generated an extraordinary cultural heritage that we have to unravel, preserve and disseminate. ”