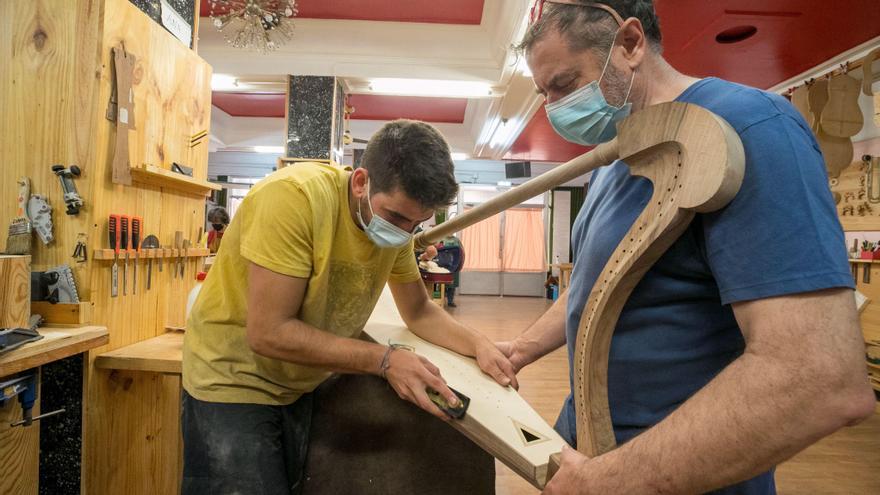 Zaragoza, Jun 27 (EFE) .- The art of building musical instruments has become a passion for many, but it is a training that is taught in few places. One of them is the School of Violería of Zaragoza, whose director, Javier Martínez, expresses that for him a musical instrument is a “small architecture” and at the same time “a living being”.

Martínez built his first violin from a broken guitar that he found at home when he was just a child. He says, in an interview with EFE, that he had never seen one before, and the result was really “a caricature” of a real violin.

When building an instrument, Martínez points out that it is essential to know the musician who will play it later and defines the process as “a shared adventure”.

“A musician and his instrument form a single unit”, affirms Martínez. He considers it necessary to know what the musician’s searches are and, even, to know his personality so that the instrument adapts to him.

The School of Violeros of Zaragoza was born in 2014 with the purpose of covering a space that the official Spanish teachings do not include, the construction of instruments.

The director of the school regrets that in Spain there is no degree in instrument construction since, according to his account, during the 15th century it was “the greatest power” in rape.

The contributions of the Spanish violeros, especially that of the Zaragozans, were key during the Renaissance for the subsequent evolution of Lutheran at an international level. These violeros modified the trajectory of the plucked string instruments, explains Martínez.

Among the tasks carried out from the school is the recovery of the organological heritage, that is, of the musical instruments that have disappeared.

In 2020, the Government of Aragon through the General Directorate of Cultural Heritage declared the legacy of the violent Aragonese as an asset of intangible cultural interest.

This is “a very advanced step” since it is the first statement made in Spain about the legacy of national violence, adds the director of the school.

Zaragoza was the city in which at the end of the 15th century there was a greater number of violent workers working in all of Europe, says Martínez.

As Martínez explains, the innovation of “the Aragonese waist” is attributed to the Violets from Zaragoza because in the Aragonese Gothic paintings of the 15th century there are representations of instruments with this morphology. The Aragonese waist is a narrowing in two opposing ces in the resonance box of the instruments.

Its purpose is that when the bow touches the string, it does not touch the wood, says Martínez who adds that this aspect that has survived to this day, “completely” revolutionized the world of bow instruments.

The activity of the School of Violeros de Zaragoza is based on three fundamental pillars: the investigation of the ancient techniques of the construction of musical instruments, the training and the cultural and scientific dissemination of this phenomenon, says Martínez.

In addition, since its inception the school was also born with the social commitment to integrate groups at risk of exclusion into this project. For this reason, the School signed a collaboration agreement with the Rey Ardid Foundation.

At the school they offer different training courses and the profiles of the students who enroll in them are diverse, says Martínez.

For this reason, these courses are attended by students who want to become professional in violence, passionate about the construction of instruments, musicians or parents of musicians who sign up to build instruments for their children.