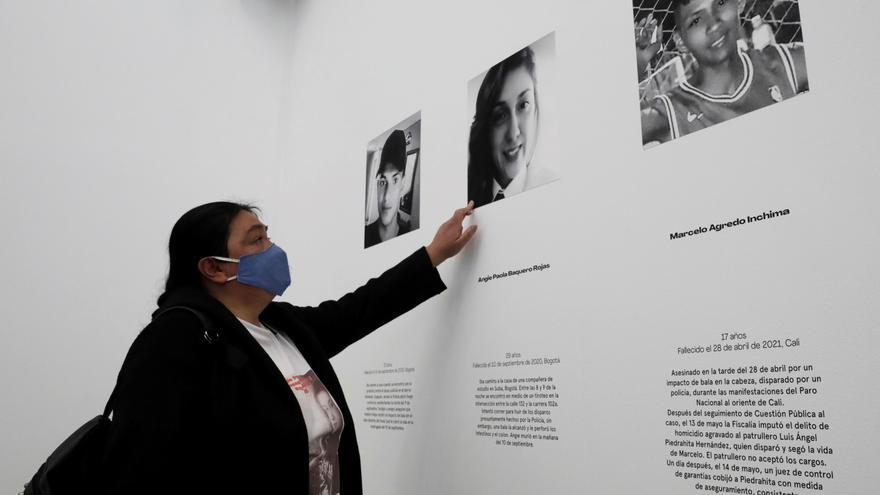 Bogotá, Jun 2 (EFE) .- Nury Rojas stares at a photograph displayed on the wall, sighs and with a lump in his throat says: "Here I am for you", while caressing the face of Angie Paola Baquero Rojas, his daughter, killed during the September 2020 protests in Colombia against police brutality.

A "selfie" of Angie Paola looking at the camera with her face tilted is one of the portraits in the exhibition "Stolen Lives", by Colombian artist Doris Salcedo, in the space "Fragments, Space of Art and Memory" in Bogotá.

It is an "urgent action" that brings together the faces and stories of people who died during protests, from 2019 to 2021, at a time when police violence in Colombia is more topical than ever, after the 60 deaths in social mobilizations last month, according to social organizations.

Some faces are already a symbol, such as that of Dilan Cruz, the 18-year-old who died on November 25, 2019, four days after receiving pellets in his head from a shotgun fired by a member of the Mobile Anti-Riot Squad (Esmad) . Or that of Javier Ordóñez, a lawyer who suffered torture in a Bogotá police station on September 8.

Others have become known in recent weeks, such as Lucas Villa, the young man who was shot eight times by unknown persons on May 5 in Pereira (west).

Many memories are just a name on the wall, a date -2021-, but they have no photo or age or description of what happened. It is only known that they died in the context of protests that are still very recent and raise many doubts.

Most of the portraits are of young people and even minors such as Alison Menéndez (victim of alleged sexual abuse by the Police) or Marcelo Agredo Inchima (killed in Cali on April 28 by a police shot) who came out to protest this last month, but among all these faces, a face with wrinkles catches.

She is Jovita Osorio, a 73-year-old woman who died of a cardiorespiratory arrest in Cali (southwest) on April 30, after tear gas released by Esmad filled her house.

The exhibition, which will be available until June 27 in this memory space, was inaugurated on Tuesday and today received a special visit from some of the mothers and relatives of the victims portrayed on the walls.

"When the death of Javier Ordóñez occurred, citizens came out to protest and demonstrate against police brutality and the Police received them shot. That day there were many injured and 13 dead, including my daughter, Angie Paola, that's why I'm here, (...) so as not to forget what happened last year, "the mother of this young woman, who would have turned 30 on February 22, told Efe.

Nury Rojas has embarked on a search for justice, like so many other mothers in Colombia, a country with millions of victims of the conflict, and has helplessly that Jorge Andrés Lazo Valencia, the patrolman who allegedly fired a bullet at his daughter that went through the intestines is still "active working in the Police."

"He is a person who knows that he is a murderer, why do not they dismiss him? Before they give him recognition, before they give him the boom so that he continues to commit things that he does not have to do," she claims frustrated, in a complaint that, she says, he is afraid that it will cost him his life.

Dressed with a firm face, the mother looks at the camera after each interview: "I am Angie Paola's mother and until the last consequences I will be standing up asking for truth and justice for my daughter and for all the people who are injured, dead, disappeared , and to know who gave the order for these massacres to take place. "

The fight of Nury Rojas coincides with that of María Elena Meneses, who assures: "we are not going to rest until justice is done" for the death of her son, Christian Andrés Hurtado.

The 27-year-old was hit by a bullet in Soacha, a city near Bogotá, the same day as Angie Paola and three months after he had gone to live with his girlfriend.

"They didn't let anyone help him," says Nury. "Exactly that happened with my son," answered María Helena, hugging and crying by his side.

The history of their children has been repeated in recent weeks in the country: complaints of police brutality, excessive use of force by the police and point-blank shots against protesters.

"They keep massacring, they keep killing, attacking, disappearing, amputating all the boys and they are only young," says Rojas.