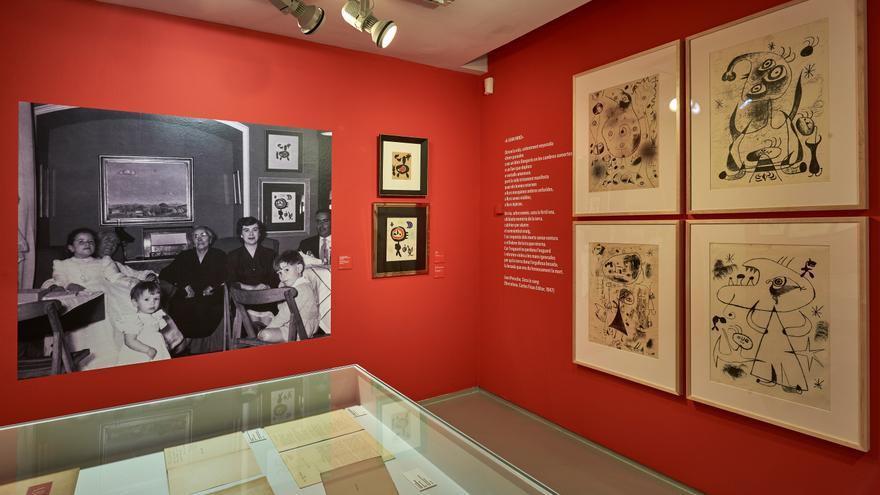 Caldes d’Estrac (Barcelona), May 10 (EFE) .- The exhibition “D’un roig encès: Miró, Palau i Fabre, Perucho i Picasso” reconstructs the relationship between the two artists and the two poets through drawings, lithographs, books, documents and photographs.

The fifty works by Picasso and Miró, from the Palau Foundation, the Miró Foundation, the Picasso Museum in Barcelona and the Joan Perucho collection, as well as other related persons or entities, such as the designer Joan Pedragosa, the publisher Joan de Muga and Editorial Polígrafa are accompanied by some thirty photographs by Leopoldo Pomés and Xavier Miserachs.

Poet and novelist, author of gastronomy books and bibliophile, Joan Perucho, whose centenary of his birth was commemorated in 2020, was also an art critic and editor. From 1960 to 1970 he was an art critic for Destino magazine and at the same time he directed the Biblioteca de Arte Hispánico collection of Editorial Polígrafa, which played a fundamental role in the dissemination of avant-garde art in Spain.

Two fundamental books were published within the Library of Hispanic Art: “Picasso in Catalonia” (1966), by Josep Palau i Fabre, and “Joan Miró and Catalonia” (1968), by Joan Perucho himself.

The exhibition, which can be seen at the Palau de Caldes d’Estrac Foundation (Barcelona) until September 19, emphasizes, according to the curator, Julià Guillamon, that both Palau i Fabre and Perucho were “two poets who were they approached the art of the twentieth century from creation and passion “.

In November 1944, both poets visited Joan Miró at number 4 of the Barcelona Credit passage, where the artist was born in 1893. That was the painter’s first contact with post-war intellectuals, which led to a long friendship and to poems and collaborations by Miró in different projects.

In the years of voluntary exile in Paris, Palau i Fabre became the great world specialist in the work of Picasso, and for this reason Perucho commissioned him a book that explained the relationship of the painter from Malaga with Catalonia.

The book “Picasso in Catalonia” deals with this relationship from the arrival with his family in Barcelona in 1895, until the inauguration of the Picasso Museum in the Catalan capital in 1963.

The curator recalls that thanks to Perucho, who since 1955 was assigned as a district judge in nearby Gandesa and who knew the southern regions of Catalonia very well, Palau i Fabre was able to rebuild Picasso’s two rooms in Horta de Sant Joan, that of 1898 and 1909.

The exhibition presents five photographs that Picasso took in Horta de Sant Joan, where he portrayed some of the Cubist works he painted.

The photographs of Xavier Miserachs and Leopoldo Pomés that document the research they did are unpublished, emphasizes Guillamón.

From this cultural crossroads between art and poetry, poems such as “A Joan Miró”, “Picasso pur”, “La edat de pedra. A Joan Miró” by Palau also emerged; or “Tres temes de Picasso” (I The guitar, II The fruit bowl, and III L’arlequí) by Perucho.

Coinciding with the exhibition, the correspondence between Josep Palau i Fabre and Joan Perucho is published, “Letters and poems”, a volume that inaugurates a pocket collection to disseminate the work of the former biographer of Picasso, and his volume of Picasso memoirs “Dear Picasso “(both Palau / Galaxia Gutenberg Foundation).