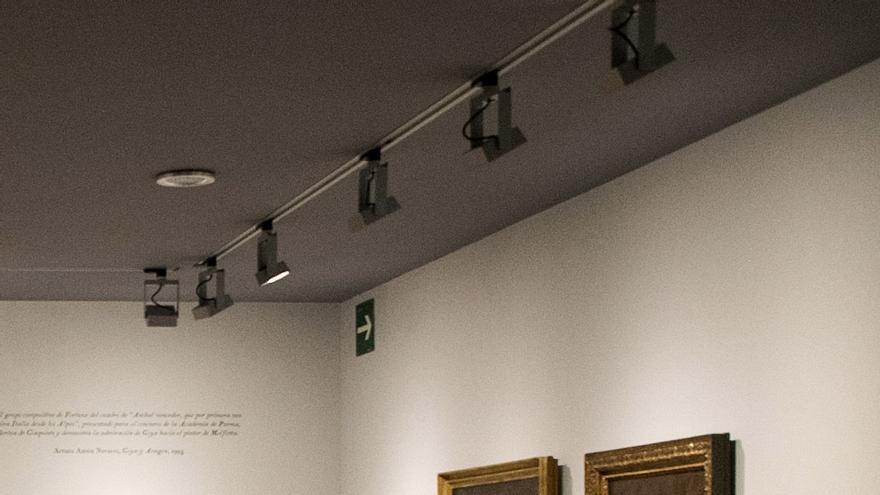 Zaragoza, Jun 24 (EFE) .- The exhibition "The influence of Corrado Giaquinto on Spanish painters in the second half of the 18th century", inaugurated this Thursday in Zaragoza, shows the public for the first time three unpublished works by Goya made in the youth time of the Aragonese artist, among them, his first known and signed work.

"San Cristóbal", "God the Father and the Holy Spirit in glory" and "Virgen del Pilar with Santiago and one of the converts from Zaragoza", the latter, his first known and signed painting, are the three works that this exhibition of the Goya Museum that will be in the Aragonese capital until September 26.

The general director of the Ibercaja Foundation, José Luis Rodrigo, the director of the museum, Rosario Añaños, and the curator of the exhibition, Arturo Ansón, presented the exhibition this Thursday, which brings together a total of 36 paintings, 21 shown for the first time to the public and 18 unpublished, by Corrado Giaquinto, Goya, Francisco and Manuel Bayeu, Antonio González Velázquez, José Luzán and Preciado de la Vega.

From the genius of painting born in Fuendetodos, the exhibition includes seven works, among them, “Virgen del Pilar with Santiago and one of the converts from Zaragoza”, the first work known and signed by Goya, an oil on a hardened papier-mâché cardboard mold , initialed on the face and on the reverse.

Another of the unpublished works by the Aragonese artist, the "San Cristóbal", dated 1763, already reflects an "extraordinary daring", while the "God the Father and the Holy Spirit in glory", made when Goya was 16 or 17 years old, denotes that the artist already dares with a large format.

"We already see a boy who has details of what is going to be", Ansón has reflected on these paintings, in which he observes "daring that indicates to us that there is something there that he will later develop more deeply".

The exhibition uses as a common thread the influence of Corrado Giaquinto in Spanish painting from the works on display, most of them coming from private collections, and offers a "panoramic and detailed" vision of some decades of the 18th century, "crucial" to the contribute to explain "the great mystery of Goya's genius", in addition to showing the influence of the Italian painter on the best Spanish artists of the time, according to Rodrigo.

In fact, between 1750 and 1775, the works of the Italian painter were references in the learning process of his Spanish disciples and of the young native painters, who made copies of them and their sketches.

The first room shows the works of Giaquinto and Antonio González Velázquez, with special attention to the painting of the dome over the Santa Capilla del Pilar, the work of the second and supervised by Giaquinto, due to its importance in the evolution of Aragonese and Spanish painting between 1754 and 1775.

The second of the museum rooms is dedicated to the Aragonese artists who continue the Giaquinto stela: José Luzán, Francisco Bayeu and Francisco de Goya.

This room also shows the two versions of Goya's "Sacrifice to Príapo", which for the first time can be seen together and compared.

"This exhibition not only serves to publicize new works, but fundamentally to try, from a scientific point of view, to advance the knowledge of these artists and seek explanations for questions", Ansón has riveted.

Giaquinto was a chamber painter to Fernando VI and Carlos III and during his stay in Spain, from 1753 to 1762, his way of painting, the use of color and light and his innovative compositions served as inspiration for these artists, among others, and they were a guide in the modernization of court painting in Spain.

The exhibition, which is part of the commemoration of the 275th anniversary of Goya's birth, also offers the screening of the documentary “La Santa Capilla del Pilar”, a 50-minute audiovisual by the director José Manuel Herráiz, co-produced by Albella Audiovisual and the Autonomous Television of Aragon.