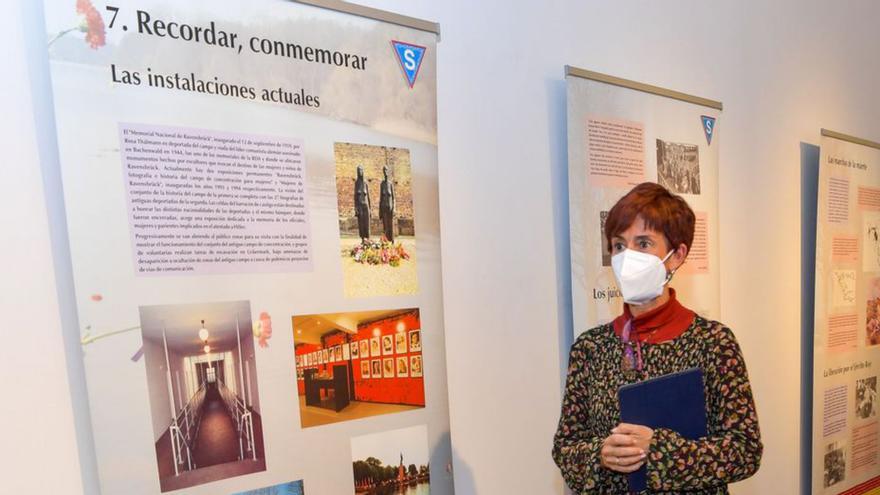 Double victims, due to their gender condition and additional suffering, standing in front of the panels of the Resistant and Deported exhibition is an exercise in memory of solidarity with those women, including the Spanish Republicans, who suffered deportation to Nazi death camps in Germany.

The historical advisor of the Foundation, Margarita Martín, explains the content of the exhibition to the guests on the day of its inauguration. | | JUAN CARLOS CASTRO

“The history of women in World War II”, explains Cristina Martín, historical adviser to the Juan Negrín Foundation, “is still largely unknown and repressed; The women, often double victims due to their gender condition and due to additional suffering such as the loss of children or certain medical experiments, constituted a conscientious, fighting and supportive collective». Of the 10,000 Spanish deportees during World War II, a third, more than 3,300 people were women, Republicans, who supported the current legality and who, later, had to flee from Spain and reach France, "where the Nazis arrested them and started the deportation process.

Ángel Quintero, the promoter of this exhibition, which was created in Barcelona but was born with an itinerant vocation and is now in the capital of Gran Canaria until mid-March, "has as its main objective to vindicate the figure of women, who by defending Republic was persecuted, fleeing to France, where most fell into the hands of Hitler's army and deported to extermination camps such as Ravansbück, 80 kilometers from Berlin.

“After more than 70 years”, he assures, “we are obliged to ensure that this part of history does not die, to rescue the memory of these women and, in this way, create awareness so that it does not happen again; In the words of José Saramago, if you forget, indifference arrives». In each of the panels, with texts and illustrations that review these terrible years, "despite the attempt made by its creators not to hurt the sensitivity of visitors to this exhibition", explains Cristina Martín, "reality prevails and You can see really hard moments of the torture to which they were subjected until the end, when many of these criminals were tried.

Another of the harshest offenses suffered by these thousands of women is that they were declared stateless by the Gestapo, "which further aggravated their suffering." According to Quintero, "the fact of not belonging to any country did not even give you the minimum protection coverage and left you in the same situation as if you were a piece of furniture or any other object."

For the promoter of this initiative, there were very striking examples of some of these women who lived a real journey of vicissitudes «fleeing from Madrid, when the civil war ended, on the way to Valencia, then to France ending up in a concentration camp where there are testimonies of how they asked for help outside because they didn't even have soap to wash themselves to finally emigrate to America, from where they returned many years later».

"As we move between the panels of the exhibition, the data gives us knowledge of how they lived in the camps, how they helped each other to survive and how they used many of them as guinea pigs for medical experiments that they did not pass" , says Angel Quintero.

Drawings of the prisoners, photos and documents from the time also give support to this story told in pieces, with a certain tenderness and a lot of solidarity until the moment of the end of the war, of the help of the Red Cross in the release of these women, how many of them had to go through the hardship of remembering everything they experienced in the Nazi trials and how to come back to life. "Despite the shocking testimonies and the story itself," explains the promoter of this exhibition, "it is essential to put these events on the table from the female perspective, because it is the least known, the one that has always been hidden. , little visible, to learn and that none of this is repeated, "explains Ángel Quintero.

This exhibition is also accompanied by two conferences, the first entitled The Deportation of Women, by the speaker Concepción Díaz, which will be held on February 17, and Culture of Peace and Human Rights, by Esteban Ibarra, president of the Movement against Intolerance, March 14.

In the case of the vice president of the Mauthausen International Committee, her talk will address the specificities of deported republican women in the group of persecuted groups and Ibarra will defend the culture of peace.