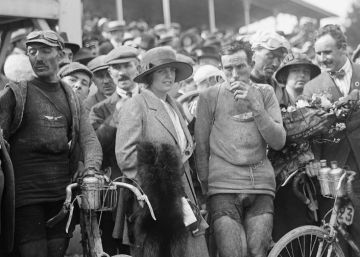 Firmin Lambot was a proactive Belgian. In 1919 he had won the Tour, but he learned the lesson his rivals suffered. The leader was Eugéne Christophe, who wore the first yellow jersey in history, something he did not like too much – "they make fun of me, they call me a canary", he lamented – but in the penultimate stage he had a misfortune that had already caused him happened in 1913. He broke the fork of his bicycle, had to stop to repair it and lost the Tour. Lambot did not want something like this to happen to him, so he went out to the races with enough money on him to buy a bicycle if his bike broke.

In 1920 he was already a veteran. He had participated and won two stages in 1913, before the Great War, he was 32 years old, but he kept himself in great shape. "I do not suffer heat like Van Hauwaert, nor stomach like Georget; I measure the effort unlike Alavoine's, and I'm more regular than Masson. I digest what I eat and I sleep like a blessed person ". Those were the secrets of the Belgian cyclist. This is how he presented himself at the start of the longest stage of the Tour in more than one hundred years, between Les Sables d'Olonne and Bayonne: 482 kilometers, no less.

That July 5 eThe squad left almost during the day, because it was 10 pm. The cyclists reached the finish line almost 20 hours later, around 5:45. An exhausting exercise, which the newspapers summed up in a few lines: "Nothing remarkable happened." In spite of that, the longest stage of the history of the Tour was disputed six times, between 1919 and 1924. On the way to the Pyrenees, the organization hurried the days. In 1919, according to the chronicles, nothing remarkable happened either, or perhaps yes. During the tedious road, Alphonse Baugé suggested to Desgrange, one of the drivers of the race, the possibility of making a jersey to distinguish the leader. The idea curdled.

But the organizers did not find any shorter way to reach the south, and the 482 kilometers seemed immovable in the journey. In 1919 he had won Jean Alavoine, one of the figures of French cycling. Then Lambot, and the following year another Belgian, Louis Mottiat. Alavoine was imposed again in 1922, the following year he won Robert Jacquinot and the last year in which the endless stage was disputed, the winner was a second-class runner, quite a surprise. Omer Huyse arrived escaped, one minute ahead of his pursuers. He was also Belgian, so France and Belgium shared the six stage victories, which ran at an average of about 25 kilometers per hour. In 1925, when the Tour published its route, the cyclists knew that this torture had ended: the stage with departure in Les Sables d'Olonne ended in Bordeaux, halfway. The longest of that year, between Metz and Dunkirk single It had 433 kilometers.