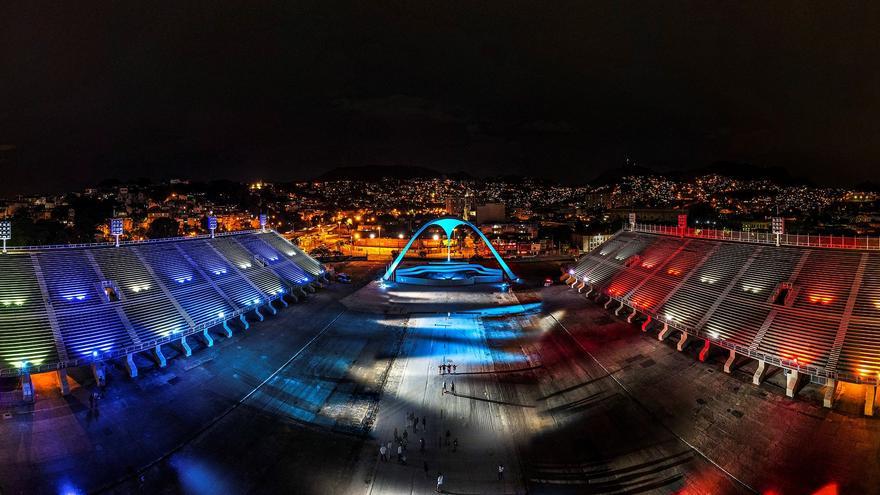 Rio de Janeiro, Feb 12 (EFE) .- The Rio de Janeiro Sambadrome will remain empty and silent between this Friday and Ash Wednesday due to the cancellation of the most famous Carnival in Brazil due to the covid pandemic, but it will have a special lighting at night in tribute to the victims of the coronavirus.

The light show, simulating a carnival parade and highlighting the different colors of the Rio de Janeiro samba schools, was lit this Friday by the mayor of Rio de Janeiro, Eduardo Paes, in a ceremony in which tribute was also paid to the victims of the pandemic.

The special lighting will be activated every night, always until midnight, until Saturday 23 February, a period in which the Sambadrome would have to open its doors for the parade of the champion samba schools of the Carnival of 2021.

The Mayor’s Office reported in a statement that the light show, which can be seen from afar since the Sambadrome will remain closed, is an initiative to pay tribute to the victims of the covid, especially those who were linked to the world of Carnival and samba.

The Carnival parties were canceled in the most emblematic city of Brazil to try to prevent a further spread of the covid in the middle of a second and more virulent wave of the pandemic in Brazil, the country with the second most deaths in the world from the disease ( 237,500 victims) and the third with the most infections (9.76 million cases).

This will be the first Carnival since its inauguration 37 years ago, in 1984, that the Rio Sambadrome will be closed during what is considered one of the most famous and attractive carnivals in the world.

The 700-meter long and 13-meter wide track on Avenida Marqués de Sapucaí surrounded by steep and modern stands for the public and leading to the Plaza de la Apotheosis was designed by architect Oscar Niemeyer to host the famous parades of the samba schools during Carnival.

The pompous performances of the samba schools, each with up to 5,000 musicians and dancers properly disguised and with majestic and enormous floats, are considered the greatest open-air spectacle in the world and the greatest attraction of the Rio Carnival.

But this year the schools will not parade and the Rio Carnival, with the exception of some clandestine groups threatened with harsh sanctions, will be limited to virtual shows and the television showing of parades from previous years.

Without Carnival, the traditional delivery of the keys to the city to King Momo, the event that officially begins the Carnival festivities, was transformed this Friday into a symbolic act to exalt the carnival tradition of Rio and pay tribute to the victims of the covid.

The act without an audience led by several samba personalities and former composers in front of the doors of the Samba Museum, adjacent to the headquarters of the famous and popular Mangueira samba school, also served to protest the total helplessness in which they were left, after the cancellation of the Carnival, hundreds of families who live from the party.

The cancellation of the party left the streets practically empty that used to be filled with millions of partiers following the comparsas and gangs, the hotels with only half of their rooms occupied and thousands of Cariocas without a livelihood.