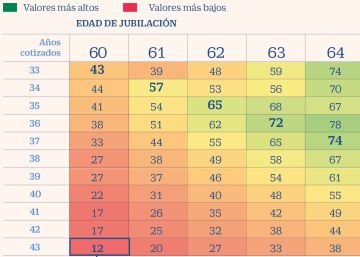 The pension reform is one of the great ones forgotten with the pandemic. But the Institute of Spanish Actuaries – who are economists who are experts in calculating risk and uncertainties and their financial repercussions – published yesterday the update of its study that analyzes the balance, generosity and equity of the Spanish pension system. And the main conclusion is that “a roughly, in the Spanish contributory retirement pension system, everyone receives more than they contribute ”. Specifically, a worker who contributes for average bases can receive twice the amount contributed, but one who does so for the minimum base can receive 2.48 euros for each euro paid in installments.

To reach these conclusions they have determined what they call Actuarial Equity Factor (FdEA) of the contributory retirement pension system, which, after an adjustment process, makes it possible to relate the actuarial value of what, as a whole, a person receives as a retiree and the actuarial value of what, as a whole, contributed as a worker. According to this, for a system to be actuarially fair, all its individuals should have the same FdEA. If this factor is greater than 1, the citizen tends to receive what they do not contribute, which leads to unsustainability, especially if that difference above 1 cannot be supported by the structural growth of GDP. And this is precisely the case of the Spanish system. Thus, in other words, the study analyzes how much more than what is contributed a retiree takes throughout his life as a pensioner.

In fact, the authors of this study argue that “one of the basic problems that the Spanish pension system presents in its current architecture is that the FdEA is very high. Its weighted average value is 1.51; which implies that the system returns 51% more to retirees than they receive ”. This calculation has been made for different contribution scenarios (average, maximum, minimum bases) and based on the number of years of contributions –between 33 and 43– and retirement ages –between 60 and 70 years.

The average calculated by the actuaries in this study is slightly lower than that recently carried out by the Bank of Spain – with data from the Continuous Sample of Working Lives of 2017 – which indicated that pensioners receive from pensioners they charge 1.74 euros per each euro they have contributed in contributions throughout their working life (74% more than they entered).

Returning to the actuarial study, in the central case with average contribution bases (average wages during working life), the system offers at least 12% (FdEA of 1.12) in the event that the retirement age is 60 years and 43 years listed. While the maximum value is obtained with 33 years of contributions and a retirement age of 66 years, reaching a value of 1.95; which implies that, to these typical individuals, the system almost gives them twice what they have contributed in Social Security contributions.

The actuaries have also calculated how much an individual would be overloaded of what they have called a ‘concave profile’ who has contributed considerably higher bases in the last 20 years of working life but falls below the maximum base in recent years (as it happens to them those who are expelled from the labor market at the end of their working life). According to these experts, this profile is the one that best represents the evolution of individual salaries. In this case, the data are considerably higher than those of the average bases, due to the positive effect of the higher contribution bases in the last years of working life.

This profitability is also higher in the case of workers who contribute on a minimum basis, with low wages throughout their lives. These workers receive at least 44% more than what they have contributed if they retire at age 70 after 43 years of contributions, but they manage to receive almost 2.5 times what they contributed if they are in one of the exceptions that allow them to retire at 60 years and have only traded 33 years. Maximum base workers have an average return of 38% more than what they contributed.

Given the lack of planned reforms for the pension system, which either increased its income or contained expenses through adjustments in the amount of present or future pensions, the Institute of Spanish Actuaries has asked itself the following question: How much would it have To grow the economy and wages so that, by improving the contributions of contributions, they tend to balance with the benefit? The answer, which these experts also provide, is that, in terms of future GDP, the Spanish economy would have to grow over the next 40 years at 5.67% in real terms, instead of the 1.59% that is estimated to grow, according to the Aging Report 2018, prepared by the European Commission.