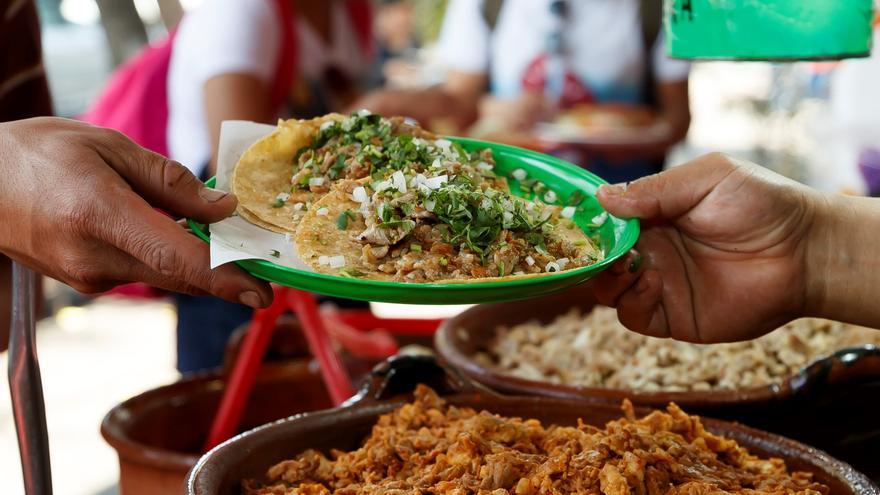 Mexico, Mar 31 (EFE) .- The taco is much more than a food for Mexico. Emblem of its cuisine and its culture, each day that passes it evolves and expands internationally with a varied offer that combines, with corn or flour tortillas, tradition and novelty.

“Everyone likes tacos,” bricklayer Carlos Ceballos tells Efe while he tastes some brimming with sauce at the foot of the construction site where he works with his brother and father.

The three Ceballos, totally unaware that this Wednesday is Taco Day, eat in a corridor with several street taquerías in the Roma neighborhood, in Mexico City, although the lunch breaks are not long in the construction.

“You’re in a hurry and you give yourself a whim on the street, you have to have time for everything,” he smiles sitting in a traditional stall, with the garnishes and sauces overflowing the bar so that customers can dispose of them as they please.

THE MOST TRADITIONAL FOOD

Carlos’s tacos have just come out of the hands of Sandra Hernández, manager of the El Morocho taqueria, who proudly confirms that the taco “for every Mexican is the most essential thing they eat.”

“You leave the house to work, you don’t have time to cook and anywhere you grab a taco and eat,” he assures while looking askance that no one is left unattended.

Patricia Álvarez’s plate is ready, a client that should be taken care of, since she goes daily to that corridor at the confluence between Álvaro Obregón and Insurgentes because she works “very close to there.”

“We have varieties. From suadero, mixed, head, head of beef, pork. In other words, an infinity of things”, Álvarez presumes about Mexican food, also happy with the international tone that tacos are acquiring.

Beside him, the taquera warns, “the idea of ​​a taco (from foreigners) is not the same” as that of Mexico, their place of origin.

“French, Spanish, Koreans, Japanese, Chinese, Australians, Russians have come,” says Hernández about his position, and everyone “leaves happier” after knowing an original taco.

“Maybe they have the idea but they don’t know what a taco is. A lot of foreigners have come here and they say ‘I didn’t eat the taco like that’. It has nothing to do with it. They have the tradition of a taco that isn’t” He stresses, happy that his taqueria has satisfied international customers.

If foreigners fall in love with street tacos, the most democratic for the inhabitants of Mexico City are the cheap basket tacos, which can be purchased for a price of around 5 pesos per unit ($ 0.25 ).

“They are very classics of Mexico City and they only have a certain flavor. The classics are pork rinds, potatoes and beans, many times they are made with adobo and green mole,” says Africa, a street vendor of tacos de canasta.

This type of food has yet another aspect, more similar to that of a closed quesadilla than the roll that ends up forming the taco.

Just as varied is the offer of tacos as the time they are eaten, which is none other than “any time you are hungry”.

Either “in the morning, in the afternoon, at night or in the early morning,” says Africa.

The polar opposite of the historic tacos de canasta are vegan tacos, which in little more than five years have been making their way into the affluent neighborhoods of the Mexican capital.

Luis Rodríguez, founder of the Por Siempre Vegan taqueria, the first of its kind to be founded in Mexico City, says that in seven years of life the acceptance of his products is “incredible.”

“Most of the tacos what they have are marinated, and those marinated are the ones that we also make. We simply change the main input, it is not the same. Our main (ingredients) are wheat, soybeans and mushrooms,” he details .

Vegan tacos are also expanding internationally, as confirmed by Luis’s finding of a vegan “a shepherd’s top” in the UK, simulating the typical taco meat of Mexico City.

“We are living in a time in which much progress has been seen in the idea of ​​vegan thinking. There has been much more awareness,” he highlights.

An Ecuadorian client, Nataly Vélez, confirms Luis’s claims about her products, very similar to the ones she tried before she became vegan.

“I can’t say this is better, because they taste extremely the same,” he says with the smile of someone holding two corn tortillas.