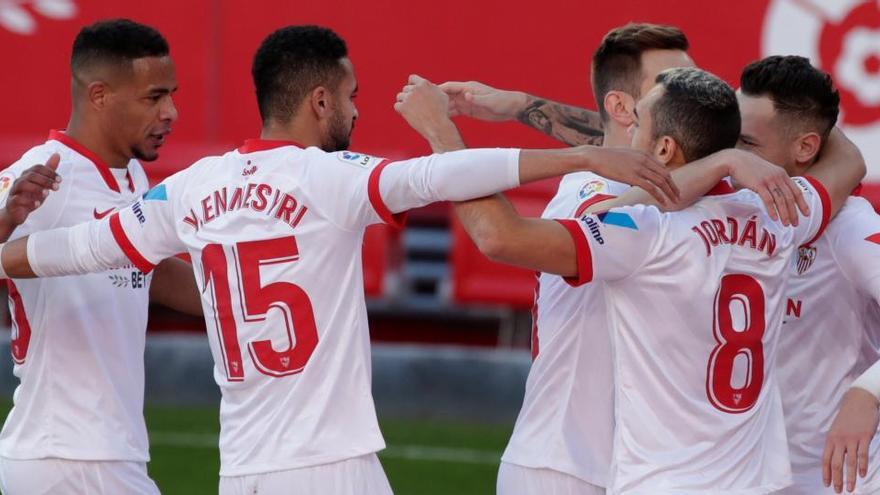 Sevilla beat Villarreal 2-0, who suffered his second defeat of the season, snapped an 18-game streak without losing and He provisionally won the pulse for the ‘Champions’ positions in a competitive match, in which the sevillistas were very effective against the territorial dominance of their rival.

After going ahead with a penalty goal from Argentine Lucas Ocampos at 8 minutes, when his compatriot Juan Marcos Foyth deflected a shot from another Argentine, Marcos Acuña, Unai Emery’s team reacted, but without clarity above, which took advantage the Seville for deal a fatal blow in the second half with a goal from the Moroccan Youssef En-Nesyri and tie a valuable victory.

In a direct duel of aspiring Champions, with the fourth place in contention, and also of reunions due to the return to Nervión of Emery -winner of three Europa Leagues with Sevilla-, both teams came out with vigor, to impose their game and with a clear will to be the protagonist, although luck soon smiled on the Andalusians.

Thus, Sevilla found the goal at 8 minutes, from the Argentine Ocampos from a penalty, deceiving Sergio Asenjo well, after a safe a priori shot from his compatriot Marcos Acuña that another Argentine, Juan Marcos Foyth, deflected with his hand, and sanctioned with the maximum penalty for the strictness of the current rules.

The action required the intervention of the VAR and also that the referee Soto Grado view it on the video screen located at the foot of the field. The 1-0 led Villarreal to go up with more determination, if possible, and press very high, although without any fruit.

They always tried hand in hand with the ‘brain’ Dani Parejo and, above all, the international Gerard Moreno wanting to associate with Fer Niño and Moi Gómez from Rota, while Sevilla defended with security and order, tried to catch the yellows off the foot and had two options through the Brazilian Diego Carlos, first in a great play by Suso and then in a header that Asenjo stopped without trouble.

Villarreal control made Sevilla lose control on the field and Brazilian Fernando Reges saw his fifth yellow, arriving late to a ball moved by the Castellón, with which he will miss Saturday’s derby against him Betis.

The Villarreal sought with intensity the tie, had the ball and dominated Sevilla. He was superior to his rival, but without much clarity in attack, which led to the break with a 1-0 penalty from Ocampos after a very even first half and with little football.

At the restart, Emery made a brave change by retiring midfielder Foyth and putting young Jeremy Pino on the field to move to a 4-4-2 with a more offensive tint, and his team continued to want to lead, but without any success.

So much so that from an attempted Villarreal attack, with a Jeremy center to the area that Diego Carlos solved, the 2-0 was born.

The providential clearance of the Brazilian was picked up by a yellow defender, although Ocampos stole the ball with faith and intelligence to launch, with a masterful pass, a great counter In which the Moroccan Youssef En-Nesyri did not forgive by beating Asenjo perfectly with his left foot and achieving his ninth goal of the season, the fifth in the League.

The 2-0 left Villarreal very touched, which, anxiously and in a great hurry, he called out, but without clear ideas to overcome El Hierro and sure sevillista rear despite dominating, but without any reward against a Sevilla that managed its advantage well.

Emery, with the impotence of the adverse scoreboard, played it and gave entry to the Nigerian Samu Chukwueze and then the Colombian Carlos Bacca, a whole institution in Sevilla for the goals he scored in his stage, by the young Fer Niño and the middle Trigueros.

The yellow team, especially on its left wing, was close to closing the gap twice 17 minutes from the end of the ex-Betis Alfonso Pedraza, to whose shot Bono responded masterfully, and Chukwueze, in which the Moroccan, very sure, saved his own again.

And there the gas of Villarreal ended, which dominated, but without any fruit, and saw helplessly how Seville, very effective, won the pulse to endorse his second defeat and unseat him from fourth place.

Incidents: Match of the sixteenth day of The league Santander, played behind closed doors at the Ramón Sánchez-Pizjuán. Lawn in good condition.