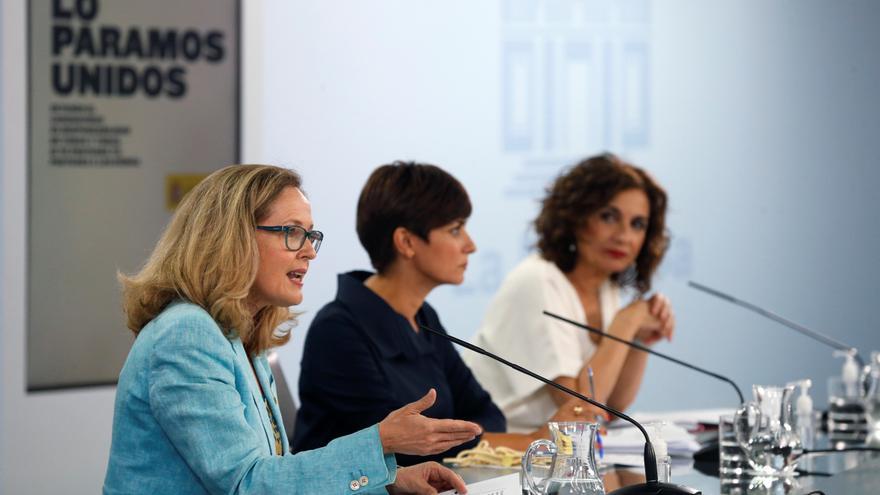 An eminently economic Council of Ministers has provided important information to calibrate the perspective that the Government has on the evolution of the economy. Three crucial factors are worth noting:

1. The establishment of the budget expenditure ceiling, which maintains the figure already provided for 2021 and which will persist in 2022: 196,000 million euros. The data is printing, and denotes the will of the Executive to develop an expansive budget, which rests on an incentive for investment capacity fed, in turn, by European funds. A key, essential factor for recovery. This, in turn, will positively condition tax revenues, so that these investment and public spending levers will be effective in closing the circle: aggregate demand.

2. The announcement of a possible increase in the SMI for September, despite the fact that Minister Calviño has not guaranteed it exhaustively. There is no doubt that this conjecture would, as a whole, contribute to the increase in aggregate demand, since it would benefit about 1.6 million workers. This can be deduced from a research work published by the Bank of Spain, which collects the results of a meticulous study signed by Cristina Barceló et alter. It is indicated that the rise in 2019 of 22.3% in the SMI had a lesser effect than the 8% in 2017 in its impact on job creation. In other terms: This increase, almost three times higher in 2019 compared to 2017, has had a similar impact on the non-job creation aspect. The reason is that the minimum wage did not reach, with the increase in 2019, a level with respect to the median wage that generated non-linear effects. In this sense, this work, signed by researchers from the Bank of Spain, does not say that jobs have been destroyed with the increase in the SMI; points out that job creation would have slowed down in some groups. The conclusions reached are, in any case, governed by caution and prudence. But it is important to note that the aggregate data has been job creation of the order of 2.3% in 2019, the year of application of the SMI. The debate is still open, and therefore it is urgent to nurture the arguments well, which must be defined by rigor.

3. Economic forecasts. In Spain, as in the rest of the world, making economic omens at this time is risky. The evolution of the pandemic is still the factor that marks and determines the forecasts that can be made. The significant advance in vaccines, however, raises positive hopes. This is what is indicated by the government’s economic team. And this is in line with all economic institutions, which underline in their advanced prospective reports –including the recent IMF document– a remarkable economic growth in Spain: the most relevant in Europe as a whole. This also includes the reviews being carried out – along the same path – by European entities, with the European Commission and Eurostat as the main references. In parallel, from the financial sphere (European Central Bank, BBVA, Funcas, Bank of Spain) a clear harmony in the same direction is evident: the outlook is positive, for the end of 2021 and 2022. The fifth pandemic wave could disrupt all this , if you persist in inappropriate behaviors. But there are undeniable concordances between different economic institutions.

A tight synthesis of the different documents consulted (with special reference to the contributions of the Research Service of the Bank of Spain) indicates the following, from two specific bases:

To illustrate all this, six indicators are decisive.

These six indicators are fed, in turn –as indicated above– from the public investment forecasts, the great lever of the recovery, with the initiatives of the Next Generation EU as an essential exponent: this is what emerges from the important fixation of the spending ceiling. The absorption into GDP of these investments from the NGEU they are calculated in one percentage point for 2021, 2.3 percentage points in 2022 and 1.7 percentage points in 2023. This provides the magnitude of what has been achieved in the European Union and its foreseeable impact on the productive fabric. A great opportunity that should not be missed. The corollary of all this that we are explaining is the increase in private consumption, with an already appreciable reduction in the savings rate: the population spends again. Again, another of the basic components of aggregate demand.

The uncertainties: four, basically. One: the recovery of tourism. The 2021 season is not considered “normal” – the contrast is always 2019. But forecasts point to a recovery in revenue that may range between 35% and 45% over 2019, at the end of the year. Here volatility is high, given that it depends a lot on the vicissitudes of the pandemic evolution not only in Spain –and in its motor regions in mass tourism–, but also in the source markets. Two: calibrate the destruction of the productive tissue and the hysteresis. Three: the speed of application of the NGEU. And four: the effectiveness of public policies.

In short, the Spanish economy has entered a growth path with positive prospects in the evolution of its main indicators. What has been communicated from the Council of Ministers does not detract from what, as we have pointed out in this emergency note, other entities are anticipating.