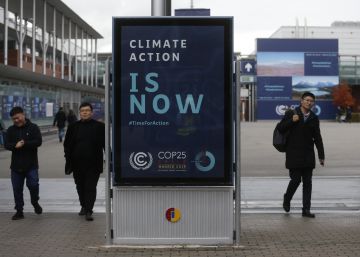 The UN is blue. And the 110,000 square meters from Ifema, the fairgrounds where the climate summit is celebrated, they have become their franchise: from the gray sky of the carpet to the indigo of the removable walls, passing through the light blue of the COP25 logo, everything oozes that I do not know what of the international organization.

Since Saturday there is officially this "blue UN" island on the outskirts of Madrid. "This is no longer Spanish territory", said the Minister for the Ecological Transition, Teresa Ribera, in the discreet act that staged the transfer of powers to the United Nations. Without fanfare or a delivery of keys to the kingdom or something (a tiara, like the misses?), Ribera and his Chilean namesake put their hands together in a musketeer plan with the UN Climate Change Officer. They took the picture and voila. We are already in international territory. It was the most bland space-time trip in the world.

"Now this is like an embassy, ​​we are only the landlords," says Clemente González Soler, president of Ifema. If there is a robbery, the thief will be stopped by security officers of United Nations (Go, surprise, light blue). As in the movies, they will take it out of there to deliver it to the National Police that monitors the fenced perimeter. Inside there will also be 450 private vigilantes from Ifema, whom the organization has asked to go in navy blue, “with the elegant Sunday uniform,” according to a friendly Prosegur.

Strolling through the still empty facilities there are rooms with language signs such as "Lab of resilience" or "Hub for capacity building". The UN territory has its own language, beyond English. At a summit where there will be no big announcements, the most repeated words will be "implement", "accelerate" and "mainstream climate action." It is expected that at some point Greta arrives to get some headlines on the headlines.

In the countries pavilion, the halls have a little flag on the door. They are the bland offices of some of the 197 “parties” in the UN language that participate. Identical decoration, white tables, black chairs, marker pens … Only in the New Zealand we can see a noisy fridge.

Who will fill these pavilions from Monday? Forced to answer as if the summit were an adolescent institute – that is, for stereotypes that you would recognize at a glance – Alexander Saier, head of the United Nations press, identifies five groups among the nearly 30,000 accredited. “A third are country negotiators, those are all the same, dark suits and ties; the women, some with dress ”(they represent 38%). Then there are the lobbyists, practically indistinguishable from officials (it should not be a coincidence). "Environmental activists" form a third group "more relaxed, with cowboys, backpacks … More colorful." Indigenous peoples add the multicultural note. And finally, journalists (2,000 accredited), for whom there is a whole pavilion. " You already know how they are, always with the notebook pointing, "Saier says, looking amused as his phrase is effectively pointed in a notebook. After a few days everyone will share the same dark circles.

In the negotiators pavilion, with 30 meeting rooms, there are already 3,500 scheduled. The thing works like this: about 8.00 the delegates review the agenda of the day, then in the plenary it is decided what will be discussed. Groups (regional or interest) negotiators ask for a room and meet. And so, in loop until November 13.

"It's like Groundhog Day," describes Saier. "The worst thing is that in two weeks you don't see the sky." "Meeting after meeting, traversing pavilions with the suitcase, is tired, yes, but necessary," admits Rizki Maulana, one of the 40 negotiators in the Indonesian delegation. Despite his 28 years, it is not his first COP. In the last one there were days that started at 8.00 and ended at 2.00. You are seeing how the flag of your country has been, in the Fitur-style area of ​​the summit, where more relaxed conferences and meetings are held. In Indonesia there is a lot of bamboo, umbrellas, butterfly-shaped kites, natural plants. The one in Turkey has a table for 30; in Rwanda's, tiny, for eight. The eco theme is noted: recycling bins, tap water sources, 34 plugs in the parking for electric cars … In its stand, the Nordic countries throw bare wood, Spain uses conglomerate, France furniture furnishing paperboard. The UN seems directly a chill out ibicenco: straw poufs, white curtains, ball lamps …

In a hallway a group takes pictures before a sign. By far, just for the attitude, you see that they are activists. To them the word seems "too aggressive." "My role is to facilitate the conversation between delegates, sometimes there are angry – diplomatic angry, without emotion – we try to humanize the discussion when things get ugly," says Detmer Kremer, whose access card as an "observer" reads Friends World Committe for Consultation. Do those in the ties listen to you? "I think they will appreciate it …" he says. Valeriane Anne Bernard, of the Brahma Kumaris World Spiritual University, is a veteran with 11 COPs on her back trying to put on the agenda problems that are not specific to a single country, such as inter religiosity. "Sometimes you can touch the heart of a delegate," he says. It is used to distribute papers with "positive messages" between them ("some come to claim them!"). "Observers cannot speak at meetings or vote, but we raise our voices for millions of people who don't have a chair at the table," says Detmer.

In the middle of the afternoon, operators continue to lay cables and carpets. But nobody doubts that on Monday everything will be ready to receive half a hundred heads of state. The haste with which this COP has been mounted in record time is already an optimistic metaphor for the climatic emergency: although time is short, it can be done. Outside, two twenty-year-olds look for a smoking corner; They are hostesses of the event and know that taking a break is not very sustainable. "The work is fine," they say, although they are still not sure what they have to do. They do know that it will be two weeks at nine euros net per hour. Tomorrow, the leaders will start arriving at 9.00. For them, Monday, and the COP, starts at 6.30.

"Room 27" is the bland name of the heart of the COP. There is the round table for the more than fifty heads of state – from Poland to Fiji – and senior international officials who will meet this Monday in Madrid. Each position has a microphone, a screen in front and a chair behind for an adviser close to the president. "The aesthetic summarizes the spirit of multilateralism: we are equal and we are together," says Alexander Saier, head of the United Nations press for the event. "This is not an exclusive club like the G20, here everyone can speak, even the smallest countries."

On Monday at 9 o'clock senior positions will begin to arrive with "a mathematical choreography," according to Saier. Every three exact minutes, cuts of streets through, an electric car has to arrive, that is (3×50), only the arrival will be extended for an hour and a half. Senior officials will go to the VIP room, which can be accessed only with three people of their choice, wives, private security, a photographer … Organizers say that the photographer usually does not do without any. This VIP room, where a snack will be served Roca brothers, is surrounded by rooms for bilateral meetings. The walls are plastic screens and there are old leather chester sofas that try desperately to give them an intimate air. In the same way, in the background, in the offices of the President of the Government of Spain and the Secretary General of the United Nations, contemporary paintings and a very avant-garde lamps try to give character to the transitory essence of the fairgrounds.