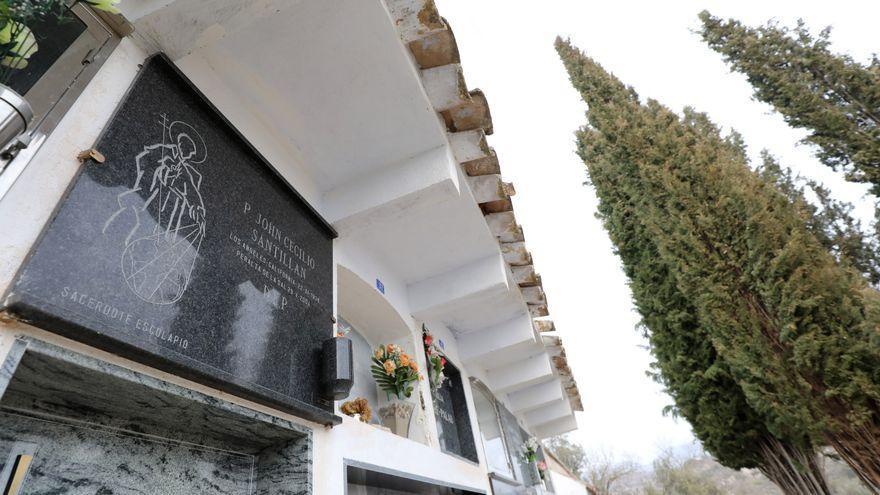 John Santillan, better known as the father Johnhardly left a trace of its passage through Peralta de la Sal, the town in the Litera region that houses the Sanctuary of San José de Calasanzfounder of the Pious Schools, born in the town in 1557. However, he died there in 2004 and is buried in the local cemetery.

Only a few know that Father John appeared in that remote area of ​​Huesca at the beginning of the 21st century, on an unspecified date, after being the protagonist, in the 70s and 80s, of several cases of alleged sexual abuse of children in educational institutions of the Calasanctian order in Californiawhere he was born in 1938. It coincided in time with the time when the Aragonese Juan Jose Omelacurrent president of the Spanish Episcopal Conference, was bishop of Barbastro-Monzón.

"For the people, Father John is an unknown", emphasizes Jaimea man in his 60s who is sitting at a pedestal table on the terrace of the bar the mora, in the square of Peralta de la Sal, which has about 150 inhabitants including those who live in three districts of its municipal area. "He was there for a short time and besides, he was hardly seen in the streets and he did not speak to any neighbor," he explains.

Attacks on students and an altar boy

However, the superiors of the order always knew that John or Juan Santillan, a native of Los Angeles, was not just another religious and that their confinement or exile in the town of Huesca was due to reasons related to alleged sexual assaults on his students and even an altar boyaccording to the history prepared by the law firms Pearson, Simon & Warshaw LLP and Boucher LLP.

The order of the Pious Schools, through the Provincial Father of the Emmaus Piarists, Jesús Elizariacknowledged to EL PERIÓDICO DE ARAGÓN that the religious was separated to Peralta de la Sal. "They were practices that were carried out at that time, although now everything would be investigated"asserted the person in charge, who regretted this type of criminal act.

"We do not accept among ourselves attitudes or behaviors that disregard the equal dignity of all people, regardless of their age, gender, personal choices or social status," Elizari continued. "In any case, those of us who assume this commitment are especially zealous and forceful in protecting and guaranteeing the right of children and young people to a childhood and a happy, safe and full life," the superior stressed.

"He fell to the ground dead"

Elizari emphasized that, apart from the usual communication and relationship channels, "an email address has been set up, [email protected], so that messages can be channeled testimonials deemed appropriatewith full guarantees of sensitivity, respect and confidentiality".

The reality is that the secrecy with which the order to which the alleged pedophile belonged acted and that his brief stay in Peralta de la Sal went unnoticed by the neighbors. In fact, the only fact that stands out in the memory of the residents, although in a very imprecise way, is the way in which he died. "He had been in the Gabasa neighborhood, maybe celebrating mass, and when he came back and got out of the car he gave him something and fell dead to the ground", indicates a person who asks to remain anonymous. It was the year 2004 and the accused of sexual abuse of minors must have been between 64 and 65 years old.

"Apart from that, there is nothing concrete about his time here," adds this same person. "Of course, if nothing was known about his present, neither was anything known about his past, about those alleged cases of pedophilia," she clarifies without hiding a certain annoyance, since no one in Peralta wants the town to be associated with a dark and rugged issue they see as something completely oblivious them and their people.

Not even the mayor, Luis Pedro Boteller, 38, has news of the alleged pedophile. "When he died I was about 20 years old and the truth is that I didn't know him, it doesn't sound like anything to me," he says. "When they have told me that he was here I have confused it with another similar case", adds the alderman.

The sanctuary is a place that registers a continuous coming and going of temporary and occasional residents. For this reason, he indicates, the relationship is usually limited to the figure of the manager and that of the rector at each moment.

The place chosen for the exile of Father John, lhe house of San José de Calasanz, is a discreet place despite being in an imposing building in which the church stands out, built on the site of the house where the founder of the Pious Schools was born.

The building, the largest in the town, is the main attraction of Peralta de la Sal. "In the past it had a school and a novitiate, and later a boarding school, but that ended years ago," says a neighbor. "Now they have a guest house, a youth hostel and a hotel school," she says.

The current managers of the sanctuary do not know anything about Father John either. Over the years the institution has changed its rector and manager a few times and the residents, who are often older Piarist Fathers who have taught in other parts of the world, also vary over time.

For him brother XavierFor example, who has just come to Spain after living for several decades in Venezuela, that North American religious is a complete stranger about whom he knows nothing at all.

Given this almost total absence of data on the North American Piaristthe only sure thing is that his remains rest in the small cemetery of the townlocated on a promontory to the north of the urban area.

In a dark gray tombstonein a third height, you can read the full name of the priest, John Cecilio Santillan, together with the place and date of his birth and death.

A death that the history of the American law firms, surely by mistake, date in 2014, that is, ten years later than when it really happened. Maybe because hehe American authorities lost track of Father John at the end of the last century and they did not know his whereabouts, although there were suspicions that he could be in Bolivia.

In any case, according to the same source, he was expelled from the order in 2002a fact that does not match his subsequent reappearance in Spain, in the town of the founder of his ancient order