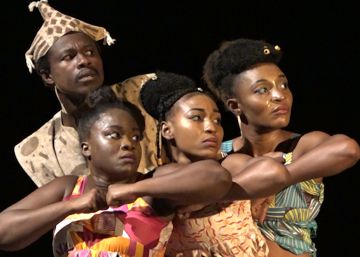 It was a hidden treasure that begins to emerge. The theater of the Spanish Golden Age makes its way for the first time in the African continent. A company from Côte d'Ivoire opens the Fuenteovejuna by Lope de Vega in the International Classical Theater Festival of Almagro. The assembly, a show full of color, music and dance, with percussion instruments as the only stage element, is represented in Almagro on Friday and Saturday (22.45 hours) and then jump to the streets of Ciudad Real on Sunday. Under the direction of scene of Vaga Obou de Sales and Luis Marqués, a Catalan playwright (1966) settled in Ivory Coast for more than 25 years, four actors and four actresses give life to this African version, in French, of the drama that Lope wrote about the rebellion of a people of Cordoba who, in 1476, stood united against the cruel tyranny of the commander-in-chief.

The title chosen for this version, Fuenteovejuna, the value of women, Realized by José Gabriel López Antuñano and that also has the artistic direction of Ignacio García, the person in charge of the Almagro contest, says a lot about what the spectators are going to taste on the stage, a combative and feminist work. At the Madrid Barajas airport, on the way to Almagro, director Luis Marqués speaks of the ease with which this universal drama has adapted to the current reality of Ivory Coast and the rest of African countries.

"The abuses of the war chiefs, both in power and the rebels, are equal to the cruelty of the commander of Fuenteovejuna. Women are still trophies of war, rapes are part of ethnic and collective genocide in conflicts. To all this is added the daily struggle of the African woman for her freedom. There are more and more female heroines on this continent, "explains Marqués, who also highlights the fact that this version has sought the balance of equality with the choice of four actors and four actresses. "A firm desire from the beginning of the project was to look for that symbol or example of equality that we look for in our African and contemporary society," says the playwright who already speaks of himself as a citizen of Côte d'Ivoire.

There is an absolute respect for the fable of Lope de Vega, including many of the original texts, to which many of the rich and colorful artistic and contemporary traditions of the African country have been incorporated. "The dances of Abidjan, a dynamic city where new rhythms and forms of dancing emerge every so often, are reflected in this play, in which the actors perform, dance and sing. You could say that Fuenteovejuna, the value of women is something like an opera or musical show. It is an aesthetic adventure. We wanted to give a different and surprising tone, which also contributes that mix of vibrant colors of the fabrics of the wardrobe. It is a work with a very African accent, in which we have used all the symbols of the modern dances of women to symbolically humiliate the power of the commander. "

Is Fuenteovejuna, the value of women more than an African cry for the liberation of women. The discovery of the theater of the Golden Age in Cote d'Ivoire, a Francophone country in sub-Saharan Africa with a more dominant dramaturgy of France or England, is lived in this theater company with great enthusiasm and joy. "It's a wonderful work that can be seen by the deaf and heard by the blind," says actor Philipe Kouakou.