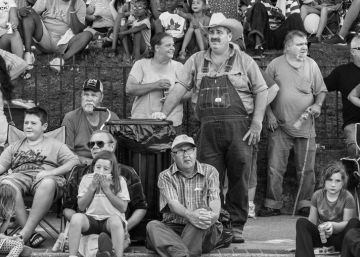 Donald Trump became president of the United States in 2016, the year during which the nation’s great racial, cultural and economic divisions became more apparent. The same year that George Georgiou (London, 1961) toured the country in order to photograph the crowds that gathered in the various parades that took place throughout its geography. Between June and November the photographer went through 14 states, 24 cities. He would attend a total of 26 celebrations. This was not the first time that the British toured the country. He had done it five years ago; traveling with his wife, the photographer Vanessa Winship, while preparing a book on contemporary America. “When you drive through different towns in the United States, you hardly see life on the street. So the image that tends to be made of the place is a fantasy. Get to know the place solely by reputation. The local community remains invisible, ”says the British author. It is in the parades where the communities are seen. Individual after individual, one by one, from community to community, those attending these events held throughout the country make up the portrait of a nation in turbulent times.

Americans Parade, is the result of this journey, it becomes part of thefourteenth edition of the International Image Festival Getxophoto. Under the slogan “To the street”, the festival presents 20 exhibitions that explore the public space as a stage for protest, as a meeting place and mutual recognition, and as a field for experimentation and reflection, as pointed out by its new curator, Jon Uriarte (current digital curator of the London gallery The Photographers´ Gallery). Among the works exhibited, the dioramas of the Japanese artist stand out Sohei nishimo, that of the French artist Thaddé Comar on the protests in Hong Kong, and The bridge, the series made by the German Charlotte Schmitz about the largest brothel in southern Ecuador. Georgiou’s work occupies the fences of the Zabala School in Getxo. It is about six extensions of three meters wide by two high. Installed in a pedestrian street, the protagonists of the photographs become spectators of the passers-by, who in turn can observe these observers, establishing a powerful game of gazes. The installation is complemented by the sample of Fnac of Bilbao and Donostia where several small-format copies are exhibited that will tour the main rooms of the commercial chain in Spain.

“I have always been interested in the politics of the street and in public spaces, in how we operate within that space, and in how individuals present themselves within it”, says Georgiou, who in his previous work Last Stop, focused on exploring London’s changing urban landscape, photographed from the top deck of a bus, from where one can observe a myriad of everyday and bizarre situations. “During my first trip to the United States, the divisions within the community already seemed very evident. Not only in racial aspects, but also in economic and social ones. I was looking for a way to refer to them and reflect them ”, he recalls. But this was difficult. “Except in the big cities, the sidewalks remain empty, especially compared to Europe. The lack of public spaces, even public transport is evident. Everybody goes by car. It is the shows like the parades that make the community visible ”.

Hence, its itinerary was determined by the stops and rides, both national and local, held in large cities, as well as in small towns. From the Thanksgiving parade in New York to the Mermaid Parade in Coney Island, passing through the Marion County Country Ham Day Pigasus in Lebanon, Kentucky, he documented with his camera an infinity of faces that come to compose a new look at America. A look that was completed once the process of developing the photographs was finished, when the photographer was able to observe the endless details that carefully reviewed and valued contributed to enrich the composition of the image. “It was as if people were building the image for me. But the variety of gestures that each shot made made the editing process very difficult, ”he says. The author had pictorial references in mind. “I have always been attracted to the life that the works of Pieter Breughel the Elder, the amount of details that they describe are, in a way, images within images ”.

“In New Orleans I photographed several carnival parades, the Mardi Grass. I remember one day when I went to two of them, so different that I had the impression of being in two different communities. One took place early in the morning, in Algiers, an African-American neighborhood known for its musicians. Most of the attendees were colored, I only saw about 15 whites, something surprising in New Orleans. In contrast, that same afternoon, in the parade through the Garden District, a well-known upper-class neighborhood, there were only whites. The amount of beads with which the assistants adorned themselves was almost 10 times more than those of the spectators of the morning parade ”, recalls the artist. Patiently, the photographer waited to find the right spot on the opposite sidewalk. Oblivious to the spectacle of the parade, he pointed his camera ready to capture the scenery of a group made up of individuals. “Although the images show individuals gathered together, in a certain sense they are disconnected from each other. If after the parade one of them were asked to describe in detail who they had by their side, I doubt they would be able to do it, ”argues the photographer. “I think the strength of the project lies in the fact that each photograph works as one image within another; if you dispense with the people, the landscape remains, and the individual remains within the group ”.

The essence of America with its archetypes and clichés exudes in the images of the British photographer. “My passion for photography comes from American photography,” acknowledges the author. Thus, behind the crowd, hides the empty landscape, the photographic tradition of America that Ansel Adams and Walker Evans contributed to immortalize. The same way you did Robert Frank In the fifties, and also protected by the neat gaze of foreigners, Georgious wanted to capture the emotional cadence of a nation, revealing what lies behind the American dream through a neutral and dispassionate gaze that points to emptiness and silence of a community.

Americans Parade it investigates the identity, space and politics of a nation, but also the isolation and loneliness of the individual. “No culture has embraced the automobile as decisively as the United States. Their towns and cities are mostly designed taking into account their dependence on the car “, writes David Campany in the prologue of the book that brings together the series, with the homonymous title,” Whatever they serve, American parades arouse nostalgia, they return one to a certain sense of belonging already disappeared but not forgotten. Perhaps something as basic as standing next to someone, whatever the reason, is a kind of utopia ”.