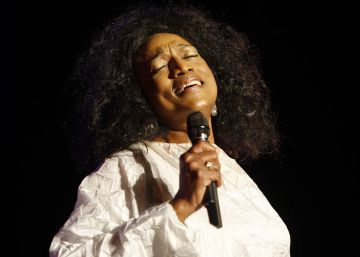 The powerful voice of Jessye Norman went out forever. The African-American opera singer, awarded four times with the Grammy and the National Medal of the Arts –the honor award given by the US government every year–, died Monday in a hospital in New York, as a result of a series of complications from a spinal cord injury he had suffered four years ago. The renowned American soprano was 74 years old.

The family made the announcement through a statement, in which they say they feel “very proud” for the musical achievements he achieved during his career and for being a source of “inspiration for the audience. "It will continue to be a source of joy," they say. Norman was one of the most important figures in the world of African-American opera: at a time when they were even less than today, he achieved leading roles in works such as Carmen or Aida and was one of the first to sing regularly in the New York Metropolitan Opera.

The soprano was born in Augusta (Georgia), during the racial segregationism in the United States. His mother and grandmother were pianists and his father was a singer. He began singing in the church and studied singing at Horward University in Washington DC, thanks to a scholarship. After graduating he continued to improve at the Peabody Conservatory in Baltimore and at the University of Michigan. He debuted as Elisabeth in Tannhäuser by Richard Wagner at the Berlin Opera in 1969.

In the eighties she was recognized as one of the main sopranos in the world opera circuit and a year after the 9/11 attacks against the Twin Towers she sang in the service that was done in memory of the victims in the World trade center, in which the two columns of light that illuminate the lower Manhattan sky each year were revealed. In 2003, he founded a school that bears his name for disadvantaged students and in 2014 he published his memoirs under the title Stand up and sing.

Norman got 15 Grammy nominations throughout his career. The first of the four he received was in 1985 for the best classical vocal solo performance. In 1997, with 52 years of age, he became the youngest person to receive the medal of honor of the John F. Kennedy Center for the Performing Arts. He also obtained honorary doctorates from the prestigious schools of Juilliard, Havard and Yale. He was a member of the British Royal Academy of Music and commander of the Order of Arts and Letters in France.

In the statement, his family highlights the "humanitarian efforts" he made on issues such as the fight against hunger, homelessness, youth development and artistic and cultural education. "