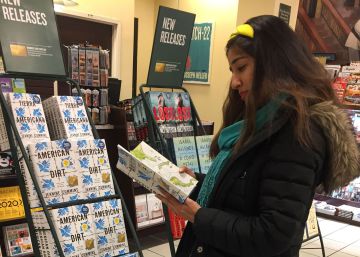 In the first pages of American Dirt there is a dialogue between the two protagonists, Lydia, in her thirties and Luca, her son, who has not yet turned ten. A group of narcos just killed his entire family in Acapulco, his father and husband included. They must run away and do it fast. In the flight, the child asks where they are going. “I don’t know, millet. We’ll see. It will be an adventure,” says Lydia. Luca replies, “How in the movies?” And she closes: “Yes, millet. Just like in the movies.”

American Dirt It has become the first editorial phenomenon of 2020, although for reasons other than those planned by its sponsors. The industry wanted the novel to become the story of violence and migration of the Donald Trump era. In the story with capital letters, a reference, a text that moved, that triumphed where journalism or photography had failed. The media campaign of the publisher Macmillan, owner of the rights, had been lavish. Hollywood had taken the rights to adapt it to the cinema. Big names in the media and literature had supported her.

But then, Latinos began to read the novel. The publisher had presented American Dirt as high literature, so the readings were equally high. Writers, critics and journalists, especially of Mexican and Central American descent, launched themselves against it. The problem of representation appeared again, of how white writers and filmmakers from the north of the Rio Grande portray the south and what are its consequences.

The dialogue of the flight from the beginning condenses part of the criticisms against American Dirt, which razed the text like a tsunami, pointing out mainly its lack of credibility, but also the stereotypes and the veiled condescension that distill its pages. Criticisms worsened and also pointed to the author, Jeanine Cummins and the publisher. A few days ago, Flatiron Books, a subsidiary of Macmillan, announced that it was canceling the book presentation tour, citing security reasons. Of the 40 scheduled presentations, they only fulfilled five.

The novel’s failures in the representation of migration or violence beyond the southern border of the United States do not discover a new phenomenon. It already existed. Especially in Hollywood. From the saga of Hitman, movies starring Josh Brolin and Benicio del Toro, until one of the last ones filmed by Clint Eastwood, The mule, that tells the story of a war veteran who carries drugs for a Mexican cartel.

The agility of the narration or the photographic quality of these films have never been criticized. In fact, the first one was celebrated by means on both sides of the Atlantic Ocean. Another thing is the way they tell the world. In The muleFor example, Mexico appears as a mixture of luxury and violence, the house of the cartel boss and the bloody succession of the same boss that begins with his murder. Everything told from the profound morality of the character that Eastwood embodies.

The plot of Vietnam is exhausted, threshed that of World War II, the southern border of the United States emerges as an imaginary perfect for dozens of productions. An imaginary that is usually limited to violence and narco. And that somehow favors the idea that Trump and his government in the neighboring country have. The last of John Rambo, Rambo: Last Blood, is the perfect example. On the tape, Rambo lives at his ranch in Arizona with a Mexican friend and granddaughter. The granddaughter, an orphan, discovers that her father, whom she believed dead, lives and is in Mexico. She goes to look for him and in search, a poster kidnaps her to prostitute her. Rambo goes looking for him and the sign, as a warning, gives him some sticks. Rambo returns to his ranch, recovers and … Revenge begins.

Beyond the narco bosses are two Spanish actors – one of them Oscar Jaenada, who He is about to exhaust the roles of Mexican villain, after Hernán Cortés and the father of Luis Miguel-, the plot states that everything that is south of the border is the land of the devil and that only hard men like John Rambo can face it. The Trump wall seems like the least the government can do.

The disagreement between reality and fiction transcends Mexico and Central America. Last year, Netflix premiered Triple Frontier, that tells the story of a group of elite US military who decides to steal tens of millions of dollars from a narco South American. The action takes place between the jungle and the Andes mountain range. The south of the continent is reduced to a group of narcos in the purest Pablo Escobar style. Or rather, what previous films and series have explained about Pablo Escobar and his organization. The film does not even explain in which triple border the action takes place: Paraguay, Brazil and Argentina? Brazil, Colombia and Peru? Brazil, Peru and Bolivia?

Without being Rambo, the pages of American Dirt distill a similar lack of likelihood. The criticism of the author for appropriating a story that is not her own – what does a white woman do, selling a novel about drug trafficking and migration for more than a million dollars? Many have asked themselves these weeks – have given way to accusations that have to do directly with the content and its sales strategy. Why did the publisher want to sell that this was THE novel about migration?

Cummins has tried to deal with criticism, although his interventions reflect a certain disconnection with what he tries to face. In an interview with María Hinojosa on the podcast Latin USA, of the American public radio, Cummins, which has barely spoken since the affair began, said “disappointed by the tone of the conversation” and “confused” by criticism. He argued that he never wanted to “exploit anyone’s trauma”. Hinojosa asked him about his past in the publishing industry – Cummins worked ten years in Penguin Books– and if that past had not helped him to know what the industry wanted and how he wanted it. She denied it. He insisted that he wanted to avoid the point of view of migrants, with whom he was not comfortable. But he repeated that he decided to adopt it, first, because his other attempts had failed and second, because his father had died just before Trump’s election in 2016 and that made it possible, somehow, to put aside his reluctance.