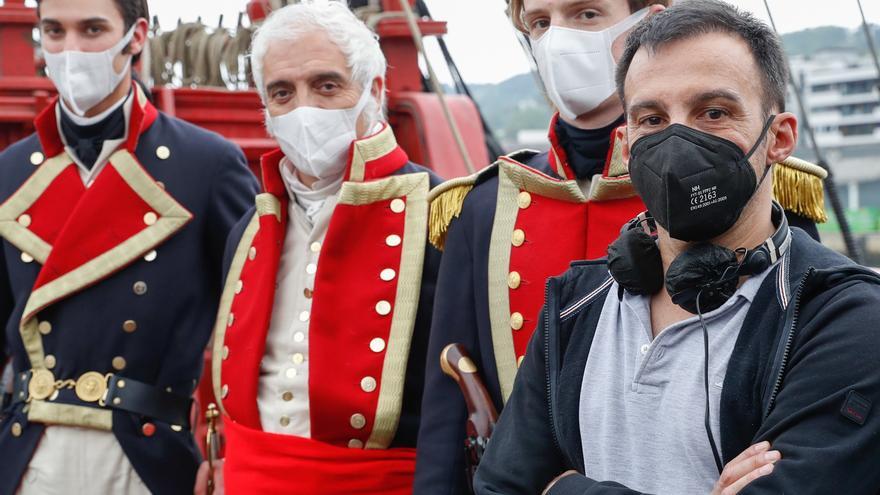 Pasaia (Gipuzkoa), Apr 26 (EFE) .- Alejandro Amenábar concludes this Tuesday in Euskadi the filming of his first series, “La Fortuna”, an experience that he would repeat again and that he has approached in the same way as he does with his films , to offer the public what they would like to see at home.

With the filming this Monday in the Gipuzkoan port of Pasaia and tomorrow in the Biscayan town of Erandio, the director will put an end to this production by Movistar +, AMC Studios and MOD Pictures, which will have six chapters and is expected to premiere at the end of September. dates when the San Sebastián Film Festival is held.

“We would love for the premiere to take place at the Festival. I think it is the ideal place,” said Domingo Corral, head of Movistar, who has spoken for the press with Amenábar and producer Fernando Bovaira.

It was after finishing one of the scenes that brought them to Pasaia, where a great battle that took place in 1804 in the Atlantic was recreated, which in the series will be a “flashback” of ten minutes of footage, an “emotional bond” with the past of an adventure starring a young and inexperienced diplomat who sets out to recover an underwater treasure stolen by a modern-day pirate.

“For the treasure hunt and the legal fight that link was necessary because not only the treasure had been lost, but hundreds of lives,” explained Amenábar, who has confessed that he even considered giving up that “flashback” for being “the most expensive part “of a project based on the comic” The black swan treasure “, by Paco Roca and Guillermo Corral.

Filming has ended with what was going to be the beginning, with the battle fought between eight boats, which will be recreated digitally except for the two that are moored at the Clock and Advanced docks of the port of Pasaia.

In one the Spanish flag flies and in the other the British one, but in reality it is the French privateer frigate “Étoile du Roy”, a reproduction of a vintage boat, and the Russian frigate “Shtandart”, a replica of a 1703 warship built on the orders of Tsar Peter I.

Corral has said that they have faced a “very complicated” project. In this last section, however, “good fortune” has accompanied them, according to Amenábar, as they had possible delays in filming due to bad weather and, nevertheless, they have had the sun on their side “when it has been raining. in the rest of the Peninsula “.

The director of “Thesis” and “Sea Inside” really likes the comic “The Black Swan Treasure”. Now that the graphic novel has moved into moving images, “the feeling” for the team is that they have gotten what they wanted.

“For this year of covid, it is a good way for people to have a good time,” Amenábar said of this six-episode miniseries filmed in Spanish and English with a national cast, led by the Spanish Álvaro Mel and Ana Polvorosa, and international, with the North Americans Stanley Tucci, Clarke Peters and the British T’Nia Miller.

Karra Elejalde, Manolo Solo, Blanca Portillo and Pedro Casablanc also make up the cast of “La Fortuna”, which Amenábar has defined as a story that “appeals to the good in us”. “In these times, it is a vindication of good people,” he stressed.

It is also “a fairly faithful adaptation to the essence of the comic.” “It has that tinny thing that keeps you hooked,” said the filmmaker, who has followed “the same filming procedure” as with his films.

He has made a distinction between series and miniseries. Since his is the second case, it has allowed him to “limit the entire production” and direct the entirety of the chapters. And he has also had the “creative freedom” to work.

“In other words, I would repeat myself,” he said.