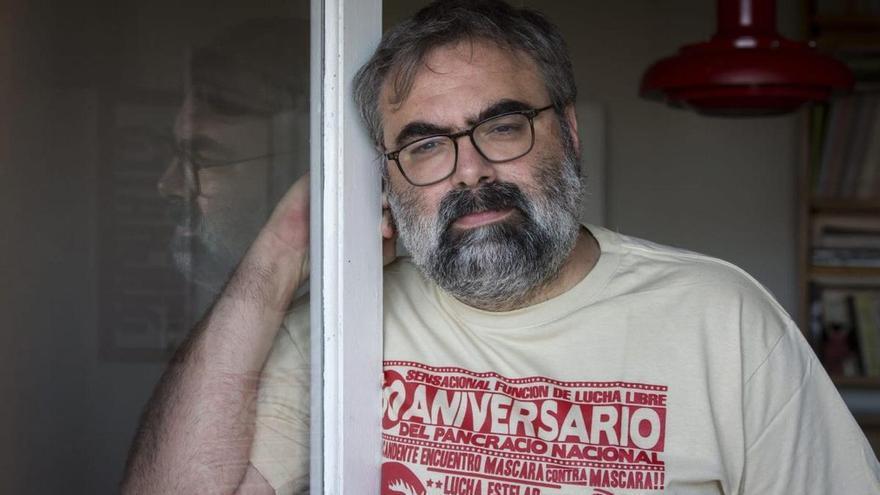 Amador Fernández-Savater has written the book The strength of the weak with the will to understand what happened to him 15 M and after 15M to analyze the current world in this way, to continue looking for ways to understand politics. To do this, he has made use of the gaze applied by the Prussian military man and philosopher Carl von Clausewitz to think about war, strategy, force.

“I was intrigued to know how people who had nothing were able to challenge Napoleon in Spain, for example. Where do those who do not have weapons, technology, power, money, armies draw their strength?”, He explains. That is what his new book is about: how sometimes, throughout history, the weak are capable of transforming the state of things.

Fernández-Savater talks about it with elDiario.es in a square in the center of Madrid, in a spontaneous conversation, with what he would call “thinking on the move.”

Question: How does Clausewitz think about war and, specifically, the strength of the weak?

It is long, but Clausewitz distinguishes between the war of the strong (“offensive”) and the war of the weak (“defensive”, the guerrilla). The strong rely, in a word, on the technical capacity to produce terror. And the weak? Those who don’t have weapons or technologies, those who perhaps don’t want the world that comes with them either? The strength of the weak passes through popular and collective activation and by taking advantage of the powers of the territory and time.

Yes. It is the strength of solidarity: there is no maquis without a home to welcome it. The people below are capable of giving themselves information, shelter, care, help. That force is capable of countering cannons. Sensitivity is political, feeling others: that you care about the other because there is something in common between the other and you.

The strength of the strong makes us objects and isolated, that of the weak is to become interconnected subjects.

It also mentions autonomy over time and space.

Yes, those who have nothing can put time on their side, always resisting the temptation offered by the fort, which is to “come and face me in a battle in which all or nothing is at stake.” Let us think of the Zapatistas, who have been around for thirty years.

He says in his book that the West has made dominance and control a way of thinking.

The “offensive war” is not only a military paradigm, but also a political, social, economic, cultural, existential one. It is the idea of ​​conquest, which passes by dominating the other, by surrendering his body and his will to take over his territory, his wealth. And that happens by exerting force on the world, through weapons, fear. The subject (dominator) is separated from an object to dominate through brute force.

You mention Hegel’s idea of ​​war: “Whoever translates the other wins.” What is this translation idea?

Hegel adds something to Clausewitz: war is not only a test of strength, he says, but also of translation. War is not just a clash of forces, but a semiotic war to assimilate the other. That means translating: entering into the other, listening carefully to it in order to be able to absorb it and erase it. Winning is convincing, that the other ends up thinking like you.

Q: You use all of this specifically to understand the 15M-Podemos political sequence.

I wonder where the “effectiveness” of the 15M resided. A movement without money, without doctrine, without institutions behind it, without anything that we think of as power, how was it able to discuss the very definition of democracy in this country? How could it pierce the, until then, omnipotent consensual culture of the Transition?

I find an answer in the features mentioned so far: the activation of bodies, extended solidarity, their own times and spaces. The squares were a very powerful place because they admitted all people, all knowledge, all abilities. Everyone could find a way to get involved. No contribution was discarded, everything added.

You indicate that all of that changes when the new policy comes on the board.

Yes. It’s not about blaming anyone. That is not what I am interested in thinking about in the book. I am interested in thinking about what we mean by efficiency, if there is only one or several. The idea of ​​the new policy, of Podemos, for example, is to translate the energy of 15M to the institutional level and what I try to explain in the book is how that translation is erasing those ingredients of the strength of the weak when translating them into a more conventional code.

In institutional politics there is the idea that those who know rule, that the participation of the people is not effective, but disorderly and tumultuous. The links no longer pass through the people to each other, but through the people with the leader, like the axles of a wheel. It begins to play exclusively in the time of power – marked by the elections – and in its spaces – media or institutional -, losing contact with the territories of life. The electoral machine does not add up, but rather discards: people are limited to expressing their opinions in networks. Well, it is the dominant idea of ​​efficiency, control.

He points out that the 15M is translated into the code of conventional politics.

Yes. 15M was a UFO, nobody understood it, it created another language that was somehow opaque to power. That messes up the board. That is one of its strengths: to be untranslatable. It seems to me that this is lost later on, when the idea arises that to be effective you have to be one more side of the board, enter the board, think about the board. We are translated to the board.

Q: You speak of the representation, the delegation and the media. There are those who read that Podemos achieved what it achieved because it was on TV.

When people say that someone speaks very well, referring to this or that politician, I always ask myself “but what is speaking well?” Is it to speak without doubts, without stammering, without making mistakes? For me that is the official language, to speak automatically, the speech of the strong. When you make the effort to speak and think in your own words, without bringing the speech learned from home, letting yourself be affected by the situation and by others, there may be flaws in the speech. For me these are signs of credibility.

What is that to speak in automatic?

TV is not designed to leave room for doubt, there are no moments of silence, being wrong is weakness, and it is assumed that you should never show weakness. It is for the strong, vulnerability is punished. So when I hear someone say “that speaks very well” I don’t know what he means, because speaking well is like a robotic, artificial speech, it is the paradigm of control: “I have everything under control and I leave you without an answer.”

Is it possible that there is truth in television formats?

It has been a long time since I heard a voice on TV that spoke to me truthfully. The force of the new policy’s word at first was that it was permeated with what was going on in the streets and squares. A word has force when it is impregnated with what happens to people. The leader is more effective when he is able to listen, to collect, to synthesize. As soon as he believes that it is his genius, he loses his strength, he is only a channel.

The 15M had no unified speech, but thousands of voices. And his communicative efficiency was extremely high. It is the strength to speak from heart to heart and wound to wound, like the speech of the Zapatistas, of Pilar Manjón in his day or of feminisms.

There is a phrase in the book in which he says: “People tend to believe that the outcome of the cultural battle does not depend on the truth of the stories but on their communicative effectiveness.”

Today communication is the dominant language. It is the language of seduction: you have to seduce the other with winks, with figures, with signifiers. The other as an object. I think nothing happens there. That in politics everything happens if there is a body that takes risks. How does 2011 start? With a man burning like a bonze in Tunisia, with an activist sincerely crying before the cameras in Egypt, with the forty camping in Sol, with bodies that risk, with something in the body that is activated. It is necessary for the body to speak, for the word to be an extension of the body, not a calculation taken from a book.

If there is no subjective change there is no objective change. That is my balance of the experiences of the twentieth century. The formula of state, vertical and bureaucratic communism attempted very strong changes in both political and economic power, but the society did not differ so much from the western one. Why? Because it did not change people’s lives in the everyday in a substantial way, it did not change the relationship with work, with knowledge, with those in charge, with politics, with machines, with the body itself. It is the subjective transformation dimension that also drives an objective transformation, a transformation of desire.