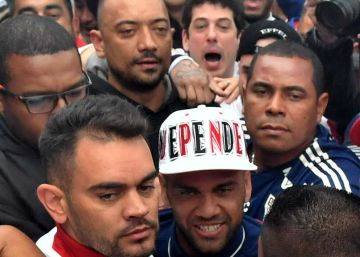 More than 20,000 people have bought tickets to attend the presentation of Dani Alves, 36, as the new signing of São Paulo on Tuesday night at Morumbí Stadium. That will be the second great reception on the return home of the Brazilian, who since he was 19 years old played in Europe. The Brazilian star in the recent Copa América and former player of Paris Saint-Germain was received on Monday at the domestic flight airport – coming from Fortaleza, where he was on vacation – by a sick crowd of fans. The club has not revealed for now when it will be released, but the world's most awarded soccer player has a clear objective: dispute the Qatar World Cup, in 2022. An injury prevented him from going to Russia in 2018.

"For my country, for my people, for the club of my heart." With this phrase from the right side veteran in a tweet about a photo of the football player, the São Paulo announced the signing last week. On Monday he landed with the official club jacket and kissed the shield. He will play with 10 thanks to a contract until 2022, according to local press. He has told himself that his dream was to play with São Paulo and Barça, and that now is the time to complete that teenage dream. The São Paulo club is the fifth in the Brazilian league at a notable distance from the leader, Santos. According to the UOL Esporte portal, Alves becomes the highest paid player in the Brazilian league with a salary of 1.5 million reais (337,000 euros). Neither the club nor the player has talked about figures.

Share team with the spanish Juanfran, who plays in the same position and has signed with the São Paulo club until 2020. The only Spaniard who had so far played in São Paulo did it decades ago, in the thirties of the twentieth century.

The Brazilian, who Spain also gave nationality years ago, has a habit of ending his contracts before changing clubs, so that his transfers throughout his career have only meant 35 million euros. Alves representatives have also negotiated with the Flamengo of Rio de Janeiro on this occasion, as its president has admitted, but has chosen the long-term project of São Paulo with an eye on playing in Qatar. Then he will be 39 years old.

Alves was without a club since he finished his two season contract with the PSG, although he led the Canarinha until the victory in the Copa América, this July, and was named the best player of the tournament. The fact is that after the triumph in that championship he remained without a club for the next season. So much so that on July 26 he wrote on his Facebook page: “I'm looking for a job, where do I put my resume? Somebody let me know here if you read this! ” It was a message in Portuguese next to a photo of him with 13 of the Brazilian team.

The most awarded player in history has raised 40 glasses in front of Pelé's 37 before returning to his homeland to play football professionally. Alves has practically made his entire career in Europe, where he arrived in 2002 to play with Sevilla. Then came his most glorious years with Barça de Messi; the years of the greatest triumphs, including three Champions. The Brazilian later passed through Juventus and PSG.