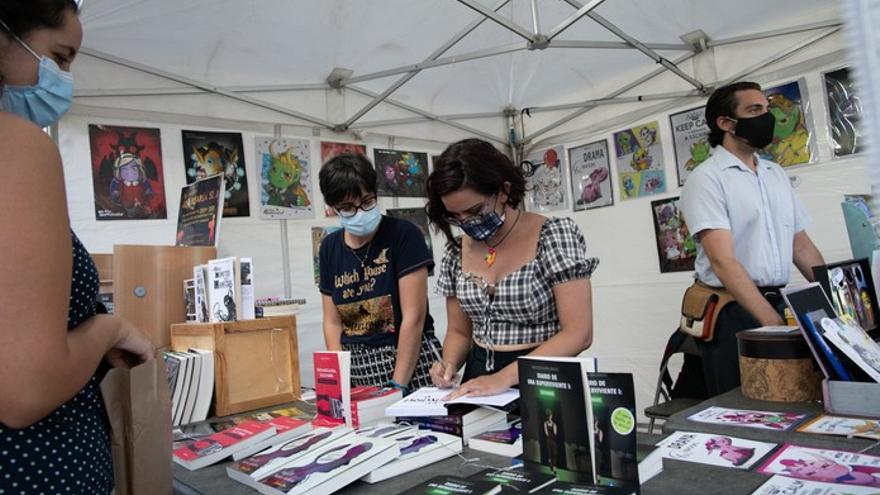 The presenter Alonso Caparrós wrote the story of his hell with the aim of shelving that part of his life, however he is surprised because that closure has become the opening of opportunities with the arrival of requests for help from parents with children with Addictions that he encourages, assuring them that they can get out of them, that it is a very arduous path and must be worked on, but that happiness can be conquered if it is fought and if hope is not lost.

This is what he tells in his work 'A piece of blue sky', which he will present this Tuesday at the Las Palmas de Gran Canaria Book Fair, a whole song of hope that contains a dark part related to his personal and family tragedies, but everyone drags one of them, and even so, you can get out, with a lot of work, but you can, he insists.

"Somehow I wanted to close chapters, write the book and paste a folder to all that part, and in fact it has been closed, but others have been opened with requests for help to know how I have done it and I am very surprised."

Now he has a new perspective on life, in fact it is in these moments, with 50 years, when he is learning to live, to enjoy the little great things, and since the possibility of helping opens up, he is already thinking about the next project, another book in which to delve into the conquest of plenitude and in conferences for those who ask for help.

The turning point in his case was the discovery of his wife Angélica Delgado, "a good woman, an angel" with a special gift that turns into her profession as a speech therapist and the children with autism that she deals with, and with whom she was lucky enough to cross.

His salvation will lead him to face the responsibility of helping those parents who suffer, as his father, the well-known Andrés Caparrós, told him, who went live in one of the interviews carried out in the promotion of his book in the capital of Gran Canaria to celebrate the maturity he has reached, the calls from parents that he himself receives and to encourage him to continue on the same path of fulfillment and help.

Alonso Caparrós, who has taken advantage of his stay in Gran Canaria to discover its corners, from Agaete to Maspalomas, will present his work at 12 noon at the Elder Museum and then sign copies to his public, who will surely crowd and will once again fill this 33rd edition of the Book Fair with color, one of the most successful in recent years, and which will be closed by María Oruña and 'What the sea hides', although before the public can enjoy more than 30 presentations for all tastes.

This has been possible thanks to the support of the City Council of Las Palmas de Gran Canaria, the Cabildo de Gran Canaria and the Department of Tourism, Industry and Commerce of the Canary Government, as well as the Canarian Institute for Cultural Development, the Elder Museum, Casa África, Nissan, Cadena Cope and AC Hoteles, whose decisive support and the institutional union have made it possible to organize the edition with the most presentations in the history of the Las Palmas de Gran Canaria Book Fair.

The writer Julio Llamazares, one of the most anticipated guests at the Las Palmas de Gran Canaria Book Fair, explained that the clash between the sinisterness of the pandemic and the beauty of the spectacular spring that was happening in parallel led him to reflect and to write his latest work during confinement.

It is about 'Extremadura Spring', a book that arises "from the spark that occurs when two opposing things meet, this type of geological sanitary cataclysms makes a spark ignite," said the author, who assures that the commotion that was produced in your consciousness is what you hope your readers will experience.

The pandemic leaves two reflections, one is "that we could not continue living as we lived, nature can live without us, but we cannot live without nature, and the second is that we have to begin to value what we have" and he opted to value in all its amplitude normality, the sunrise and the simple walk down the street.

For this reason, "We were happy and we didn't know it", the title of an article by the journalist Íñigo Domínguez in El País, is for Julio Llamazares the one that best defines the pandemic, a phrase that should appear in many places so that society does not I forgot it. "We believe that we are the center and nothing was going to happen to us" and suddenly "we find ourselves in an exceptional and tragic situation."

The pandemic, he continued, has made some people better and others worse, "as in wars, there are those who give their best and those who become cruel and bloody, the health workers gave everything, and not only they, the truckers and those who maintained basic services, but at the same time there were people who took advantage of it to create discomfort ".

This is the case of politics, he pointed out, since "instead of being at one with the Government, whatever it was, because anyone was going to do the same, no one was born with a book of instructions to face a pandemic and surely they were committed many mistakes, but there was a huge lack of solidarity between the parties, it makes you think that if one day there is a war, better to be with your enemies than with your compatriots. "

In any case, "throughout history there have been many pandemics that have transformed thinking, for example the Renaissance was in the air, but it was caused by the Black Death and the desire to live again. After a great tragedy and war, there is a moment of creative explosion and I think it is happening now, after dark times, happier and more positive times are coming, "he predicted.

Restructuring of schedules for the last day

The desire to take advantage of the normality referred to by Llamazares has been verified at the Las Palmas de Gran Canaria Book Fair itself, which will restructure the schedules of the presentations and signatures of the last day for the convenience of the public, who will be able to enjoy more than thirty presentations this Tuesday.

This fair is the one with the most presentations in its history thanks to the support of institutions, such as the consolidated help of the Canary Islands Government through the Ministry of Tourism, Industry and Commerce, its Elder Museum, as well as the Canarian Institute of Cultural Development, in addition of the effort of the Cabildo de Gran Canaria and the City Council of Gran Canaria, who have not hesitated to support this literary event that has become an incessant flow of writers, the public and sales of copies. Casa África, Nissan, Cadena Cope and AC Hoteles have also collaborated, from whose windows the authors have enjoyed an exceptional view.