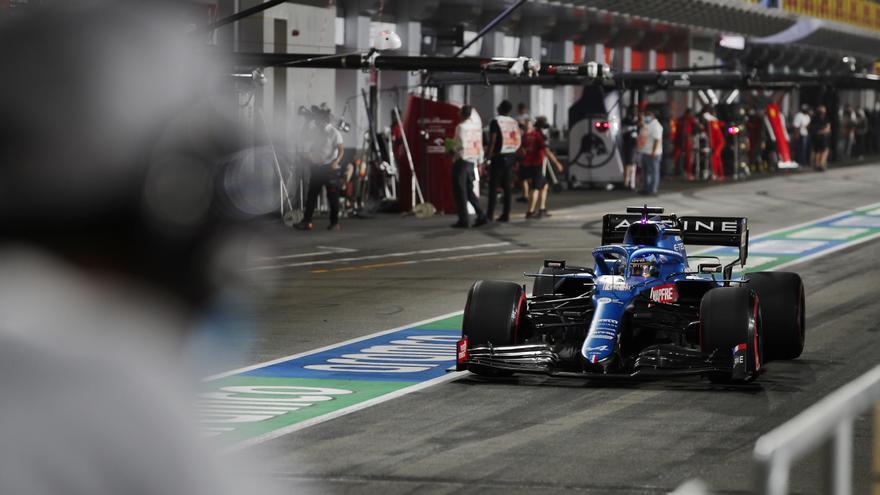 The Spanish Fernando Alonso (Alpine), double world champion of Formula One and that will start fifth this Sunday in the debutant Qatar Grand Prix, the penultimate of the World Cup, he told EFE this Saturday at the Losail circuit that “does not” see feasible “the podium”, but that “the ‘top 5’ would be very good” and that his “objective” will be to try to “finish in front of (Pierre) Gasly“, French for Alpha Tauri, who comes fourth, one place ahead of him.

“I don’t see the podium as possible, no. First you have to focus on Gasly, who comes out fourth, on the dirty side. But the podium is difficult, because we know that even (Mexican Sergio) Pérez (Red Bull), who comes out on the eleven, in theory it will end up in front of us, “the Asturian double world champion this Saturday in the mixed zone of the Losail circuit.

“A ‘top 5’ would be very good; and to finish in front of Gasly would be the objective, “said Alonso, who has 32 victories in the premier class of the engine, the 32 that Spain has in F1 throughout its history.

“I did not expect this result, logically”, admitted Alpine Spanish. “We have suffered, especially in the time trial, then in the race we are a little better, but the time always costs us something and although we were going well all weekend, then in the time trial you hope that when the others put their full potential, we will leave. a little backwards, “he added.

“But no, it went well. Even in Q2 I was third, sometime. So I am surprised and grateful because the car was going very well and I would have stayed all night driving around here if I could have, “said Alonso, who always distinguished himself by optimizing resources and reacting quickly to new or unexpected situations.

“I don’t think that has benefited me”; he answered, when asked by Efe. “We all do simulation and we are quite prepared when a new track arrives, there are no great secrets,” he said.

“I like to improvise”he conceded nonetheless. “I think in Q1 there are drivers who take a little longer to warm up, who are maybe at about six tenths of their potential and then when you put six sets of tires in Q1, Q2 and Q3, we all hit a certain limit that It is very even and has happened a bit like that. ”

“But I am happy; And although, as we always say, the points are not given on Saturday, sometimes we have come out worse, other times better and then on Sundays everything changes. We are in a good position, but we have to finish the job tomorrow; if it doesn’t do us any good, “Alonso told Efe this Saturday in Qatar, that he doesn’t think he can aspire to the podium.

“I don’t think so, you have to focus on Gasly, who comes fourth on the dirty side. But the podium, even Pérez who comes out eleven, we know that in theory it will end up in front of us. Then, the ‘top 5’ would be very good: and (to finish) in front of Gasly would be the objective, “said the Asturian star, who, like most, does not yet know which strategy will be the correct one on a track unknown to everyone.

“I think it’s a bit open, two stops would be possible and one stop would be the same as well. The socks and the soft ones it is not known exactly which ones are better in a lap and how much longer the socks will last, “he said, referring to the tires.

“A little more yes, but enough or not … I think there are many unknowns and we will only know tomorrow, because there is no historical data of this circuit”Alonso commented this Saturday at the Losail circuit.

Sainz: “It was stressful, complicated”

For its part, Carlos Sainz (Ferrari), which will start seventh this Sunday in the debutant Grand Prix of Qatar, the twentieth and third-to-last of the Formula One World Championship, pointed out to EFE this Saturday at the Losail circuit that it was “a stressful and complicated qualification” since they “risked “using the medium tire in Q2 (second round)” and that in the end “it turned out well”, although, as it is an unknown track, he believes that this Sunday “anything could happen”.

“It was a very stressful ‘quali’, especially in Q2, by risking to pass with the average. It was really hard, because I thought I was staying in Q2, when today I thought I had plenty of capacity to go to Q3 with the soft tire, “Sainz, seventh in the World Cup, told Efe this Saturday in the mixed zone of the Losail circuit.

“We have played it, it has been complicated, but it has gone well”said the Madrid rider after finishing seventh in the first qualifying in the history of the Qatar Grand Prix.

“And on Sunday we came out with the stocking, which we really don’t know if it’s an advantage or not. You lose at the start and then hopefully it degrades less than the soft one, but we’ll see. Anything can happen “, Sainz replied to Efe this Saturday in Qatar.

“It may also be two stops and Going out with the stocking does not give you any advantage … Or it could be one, and thanks to the average you can make a stop. So as today we were very divided, we have tried to bet on what we thought was the best option, to go out with the average, to have flexibility, and I hope that is the case, “the Spaniard from Ferrari told Efe, in Qatar.

Carlos once again surpassed his Monegasque partner Charles Leclerc, who was eliminated in Q2 and that will start thirteenth this Sunday.

“I don’t know what happened to Charles today. From the third training session, he was not completely comfortable, in the ‘quali’ either. It has been much further away than in the last two weekends, and the truth is that I am improving too, every time I am liking myself more with the car and I am finding my ‘feeling’, my ‘set up’ direction and I go improving a lot, “he said.

“But what happened to him today is not normal. I am sure that now we will analyze it and try to understand what happened,” Sainz said, referring to Leclerc, who stated that the clue found her “three times faster than it looked in the videos.”

“Hopefully things will work out tomorrow,” the son of the double Spanish world rally champion of the same name told Efe. “To start tomorrow we will go out on the clean side and hopefully it will be positive. Hopefully it will be a clean start, that nothing happens to us and we can get into the race with the middle against the softs, and have a good race from there, “he added.