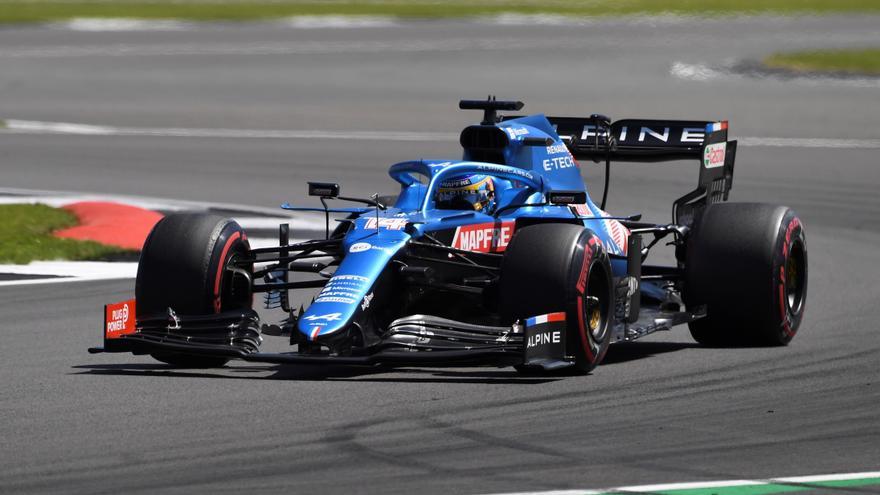 The Spanish Alpine pilot Fernando Alonso made a very positive assessment of the novel system of sprint qualification, premiered this Saturday at the Great Britain Grand Prix, and highlighted his departure, which was “very aggressive” after advancing six positions in the first round.

The Asturian, who will finally start seventh this Sunday, was very happy with his performance. “It was a very aggressive start, from eleventh position to fifth. Then we were a little out of position, we were too slow being fifth and we had to let the McLarens go and then concentrate on Vettel. We started seventh and it is a normal time we would have started 11th. It has been good, “Alonso said in statements to DAZN.

The two-time world champion stressed that the rest of the pilot “They were slowing down pretty early.” “In many races, like in Baku, I have already overtaken on the inside and I do not know if we have more confidence in the first lap than some of our rivals. It is true that we usually take advantage of it and in the first corners there was a lot of action,” he analyzed Alonso.

“We recovered positions and being out of where we had to be, in the end the tires had more degradation. We had to put up with Vettel in the end (the new qualification system) is a Q4, as I say, and I am happy about this, “he added.

Asked how the first overtaking was, Alonso said that he had the “intention” to get out “on the outside in the first round”. “But I did not need to leave the track to overtake, which is what they have done to me until now. It was clear that I was not going to lift my foot,” he said.

“I had a good time on the first lap and then quite regular. For you it was a ‘sprint race’ but for me it was a marathon. I thought … this race never ends with so much defense! “, He admitted.

Finally, asked about the options for this Sunday, the Oviedo pointed out that they have “little energy in these long circuits”. When we have a car behind us a little faster on the straights, we know that sooner or later we are going to fall and sometimes it is almost more efficient to let them pass soon because if you do not enter a loop and the battery dies soon, “he settled.

Sainz: “It wasn’t where I wanted to be”

Spanish Ferrari driver Carlos Sainz acknowledged having enjoyed the novel ‘sprint race’ as a qualifying system at the British Grand Prix, but stated that “it was not where he wanted to be” after staying last after suffering a crash from George Russell (Williams).

“We had a problem at the start that cost us a couple of positions and then we tried to recover by passing Russell. That is when he has made a quite clear and serious mistake, It cost me the race and almost an accident, “said the Madrilenian.

“It was a sprint race -and never better said-, on the counterattack and last classified I was able to arrive eleventh. We have come back in 17 laps as much as we could but unfortunately I didn’t like it very much. I’ve had fun, but it wasn’t where I wanted to be, “he admitted.

Asked about Russell’s mistake, Ferrari said that “it has been very clear.” “Russell has lost control of the car, it has gone behind him, I am not very clear about it, and he has thrown me off the track. We have seen penalties for minor things, like in Austria, and I don’t understand that he finished the race ahead of me with the mistake he made, “he added.

“The risk involved is clear, but this ‘sprint race’ has also given us the chance to traced eight or nine positions. The objective for this Sunday is to finish in the top seven or five and we still have half the work to do, “he snapped.

Finally, in relation to the format, Sainz said that who should give their opinion are the followers. “I had fun, how could I not do it if I went from last place to eleventh, but I don’t know what it was like on television. Those who have to judge are the fans, who are for whom this format has been created, “he concluded.