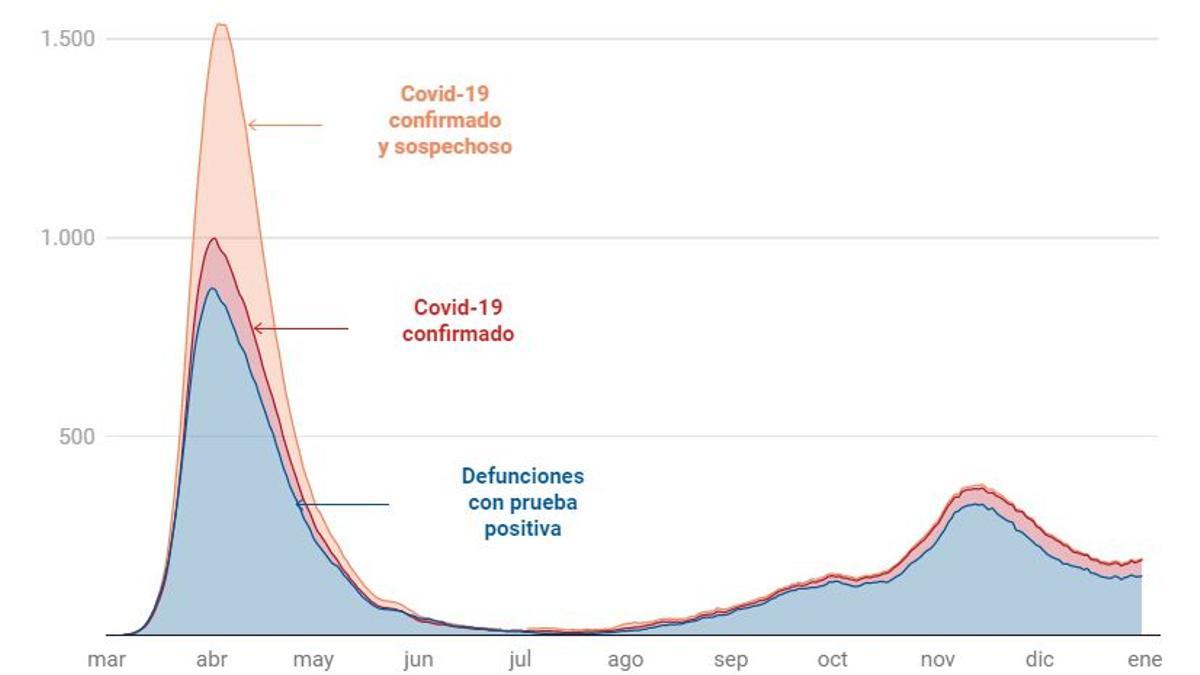 Between January and December 2020, 74,839 people died from COVID-19 in Spain. For the first time since the beginning of the pandemic, the National Institute of Statistics (INE) publishes the definitive death statistics due to death in Spain for the full year of 2020.

The count, made from the medical death certificates, confirms that the real mortality from Covid was much higher than the official Government figure in the first wave (February-May) but that it was quite close to the death data published by the Ministry of Health from the month of July.

Unlike most of the figures published so far, the methodology followed by the INE in this statistic is based on the analysis of the medical death certificates that the collegiate members fill out at the time of death. In this certificate, the doctor records the main cause that triggered the death of each person.

Specifically, during all of 2020, 60,358 deaths were registered whose cause of death was COVID-19 with the identified virus and another 14,481 people died with suspicion of COVID-19 -the majority in the first 5 months of the year- due to having symptoms compatible with the disease (which the INE calls COVID-19 unidentified virus), according to figures published by the National Institute of Statistics.

These two causes of death related to COVID-19 were incorporated by the World Health Organization (WHO) into the International Classification of Diseases (ICD-10) in March 2020 and are the ones recommended by the body to establish the mortality caused by the virus.

The official data of the Ministry of Health counts to date 54,000 deaths with coronavirus in 2020. A figure that only takes into account the people who died with a positive analytical test and that the autonomous communities reported to Health.

The gap between the figures draws a first wave where many cases and deaths remained unaccounted for due to the lack of analytical tests and a second and third wave where the increase in CRP and the arrival of antigens left few deaths uncounted.

Between February and May, the INE registers 46,000 deaths due to Covid-19 while the Government’s figures only include 29,000 of those deaths. From July onwards, with the increase in diagnostic capacity, the difference is just under 4,000 deaths: 28,000 according to the INE and 24,500 in government figures.

The data of 74,839 deaths known today is much closer to the excess mortality figures that take civil registry data as a reference: 69,000 more deaths in 2020 compared to the average of previous years according to the Mortality Surveillance System (MoMo).

With these data, this 2020 would be the deadliest year in the democratic history of Spain both in absolute numbers and adjusting by population, according to calculations made by elDiario.es.

Tags: 74, 839, cause, coronavirus, Covid, mortality, persons, real, they passed away