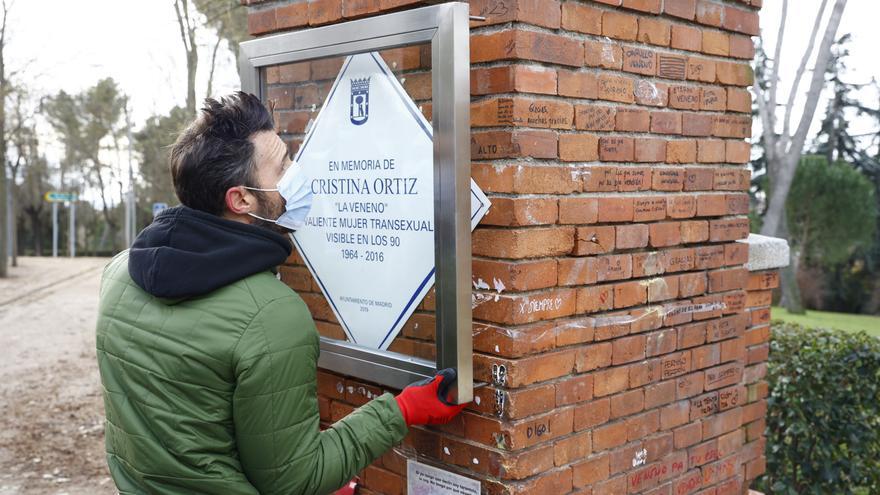 The Madrid City Council has replaced this Friday the plaque for Cristina Ortiz, artistically known as 'La Veneno', in the Parque del Oeste. Thus, he reinstates a tribute that was started in April 2019, a week after being placed by the Government headed by Manuela Carmena.

Thus, the message 'In memory of Cristina Ortiz' La Veneno ', a brave transsexual woman visible in the 90s' looks again as it did a year and a half ago on the pillar located between Francisco y Jacinto Alcántara Street and Paseo de Camoens, in the area where Ortiz practiced prostitution.

The Consistory detailed two days ago that the badge would have a transparent material plate in order to "resist possible attacks and better anchoring." The device has been installed this Friday afternoon. More Madrid has doubted its correct placement, since it does not fit with the rhomboid position of the plate. Línea Madrid, the City Council's citizen service Twitter, has requested a "notice of action" after its notification on the networks.

Last October, after the broadcast of the final chapter of the series 'Veneno', which narrates the life of Ortiz, some followers began to deposit flowers, photos and candles, the latter caused a small fire weeks later and lit some of the gifts , so the City Council had to withdraw this improvised tribute to this trans woman.

Cristina Ortiz became popular in the 90s for her appearances in programs such as 'Tonight we crossed the Mississippi' and 'La Sonrisa del Pelícano' and died in 2016 after spending four days in a coma in the Intensive Care Unit (ICU) of Hospital La Paz de Madrid, to which she arrived after being found at home with a blow to the head.