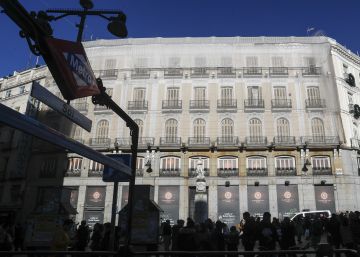 One of the most important commercial projects in the center of Madrid, which has been paralyzed in the last four years coinciding with the legislature as mayor of Manuela Carmena (Now Madrid). The Madrid City Council, headed by José Luis Martínez-Almeida (PP), has resumed the fund project Kennedy Wilson to rehabilitate the building located in Puerta del Sol number 9 and make it one of the largest flagship stores From the capital.

“We are processing the file,” advances a spokeswoman for the Department of Urban Planning led by Mariano Fuentes (Citizens). That property, owned by the US fund, needs a Special Plan that allows the change of use from residential to commercial, something in which the municipal corporation works with the owner.

It is expected that the project can be approved in the coming months, which would facilitate the beginning in 2020 of the deep remodeling of the building, according to knowledgeable sources. The play has been commissioned to study architecture RCCyP, which has led emblematic commercial projects in the city such as the large Primark store in Gran Vía or the one of the nearby Media Markt in the Plaza del Carmen, in the old Cinema Madrid.

Kennedy Wilson, ally with Renta Corporación, took over the property in May 2015, just before the municipal elections held then and that raised Carmena to the mayor’s office. For four years, both the Special Plan that would allow the change of use to commercial and the consequent work have not advanced.

The US fund was made more than four years ago with the property in an auction of Commercial Court number 3 of Barcelona for an amount close to 30 million euros. Then it transpired that the building would become a center for luxury brands. But the project on which Kennedy Wilson works is that of a large flagship store of about 3,500 m2, destined to become an iconic store for a single brand, and with a large terrace crowning the property, which could be used, for example, as a cafeteria for the school itself to rent the space. The task of marketing the building lies with the real estate consultancy Knight Frank, as can be seen in the signage installed on the asset itself.

The Puerta del Sol has become a key place in the interest of investors and big brands. The Mexican family Díaz-Estrada was one of the first firms to bet on buying at kilometer zero in Madrid, when it won the number 1 building currently occupied by the iconic Apple store. The US fund Thor Equities has also been active in recent times, taking over properties in numbers 5, 9 (a local Kutxabank) and 11, for which he paid 65 million for a store previously occupied by the English Court. 110 million visitors pass through this place every year and it has one of the most expensive commercial rental prices in the city, 300 euros per m2 per month, according to a recent study by Knight Frank.

Kennedy Wilson is a Californian fund based in Beverly Hills with investments in multifamily, commercial and residential properties, founded in 1977 and directed in Spain by Cristina Pérez. This firm declined to comment on the progress in the project.

This fund is expected to boost the project and subsequently sell the property to an investor with long-term interest when it has a brand for the flagship store and, therefore, the building has a greater value, according to market sources.