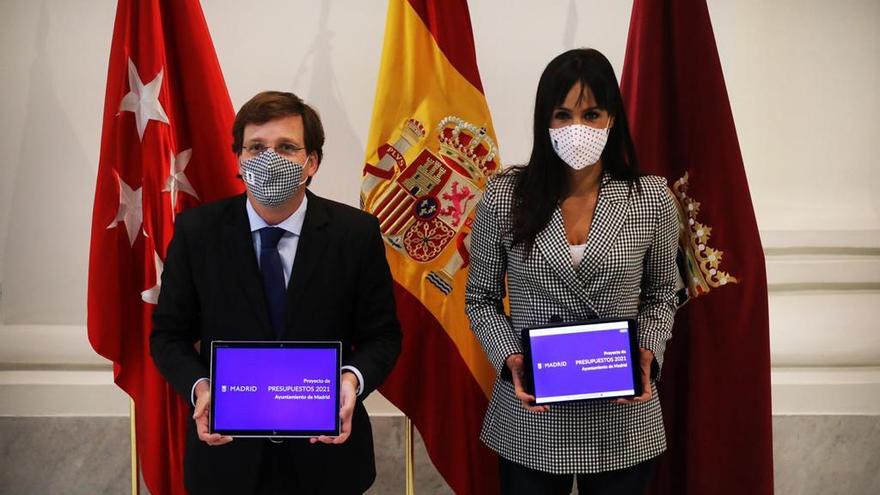 The Madrid City Council has presented the 2021 budget project, the tool with which the City Council will face the economic and social crisis derived from COVID-19. These are the most expansive accounts since 2009, when Mayor Alberto Ruiz-Gallardón governed the city and the municipality accumulated a meteoric debt. The budget grows by 8% to 5,066 million euros and the investment will reach 488 million, explained the mayor, José Luis Martínez-Almeida, at the press conference after the extraordinary Governing Board that has approved this first sketch of the accounts.

The project has yet to win votes in favor of Vox to reach a majority. The municipal government also aspires to ensure that the opposition of Más Madrid and PSOE do not vote against to “repeat the consensus” of the Villa Agreements. 10% of the budget has been allocated, according to PP and Citizens, to the execution of these pacts.

The increase in the budget to historical levels occurs despite the fact that the income of the Consistory will fall again in 2021 by 167 million due to the context of the economic crisis and also due to a new reduction in taxes – generally by the IBI and particularly for the hotel and catering industry and trade-. How do the accounts turn out then? With the relaxation of the fiscal regulations for the Town Councils, decreed exceptionally by the Government of Sánchez, the corporation is not obliged to repay the debt and, in addition, it will be free to spend its surplus in 2021. It will be 233 million extra, in addition to all 5,066. In the opposition there is fear that the City Council will break the trend consolidated since the Manuela Carmena stage to reduce the debt year after year and in the next year it will swell again.

This is how the cake is shared: priority of employment over social services

Economy and Tourism, the ones that grow the most. The items increase in all government areas, except the Treasury, which will stop spending 31 million due to the reduction of interest on the municipal debt, the owner of the portfolio has clarified. Engracia Hidalgo. But both the mayor and the deputy mayor have highlighted the injections planned for the Economy and Employment and Tourism. The first council takes 37 million euros more (32%) to promote trade, hospitality, guarantees to SMEs, employment policies and the “attraction of innovative talent”; the second, led by Andrea Levy, an extra four million to reposition the city as a tourist destination.

The works planned for 2021. The accounts also reveal the works projected for 2021: the completion of the works in Plaza de España, the covering of the M-30 as it passes through the old Vicente Calderón Stadium, the definitive pedestrianization of Puerta del Sol or the redevelopment of the surroundings from the Joaquín Costa bridge, as well as more public housing in Carabanchel, Villaverde, Vicálvaro, Puente de Vallecas and Villa de Vallecas.

New cleaning contracts. Security and Emergencies, already greatly benefited in 2020 – when the Municipal Police budget quadrupled – will have 58 million more by 2021. Firefighters or Madrid Salud also depend on this area. And the Environment and Mobility area will also have a good budgetary boost also for 2021 due to the signing of the new cleaning contracts, which break with the system devised by Ana Botella. The budget grows by 282 million and reaches 1,500.

19 million for “social emergency”. The City Council has given priority to these portfolios over that of Families, Equality and Social Welfare in accounts designed to tackle an economic and social crisis. The area directed by Aniorte will benefit from a budget increase of 22 million. 8%. Of that amount, practically all (19 million) will go to combat the “social emergency”, that is, they will be used to finance food aid or rent when thousands of families crowd into solidarity pantries set up by neighborhood associations in front of the lack of response from the City Council. It is 25% more than in 2020. Villacís has highlighted that social spending increases 14%: 187 million. This mixed bag also includes items such as the increase in the housing budget, with an extra 33 million.

The families card, the City Council’s star measure to serve the most vulnerable people that has already accumulated three months of delays, has an item of 19 million euros, to which is added 7.2 more this year, according to a spokesperson of Families, Equality and Social Welfare. The first plastics will be delivered at the end of November after announcing its launch in September. The home help service, managed by the districts, will have an injection of 13 million.

More cuts to direct grants. The Madrid City Council continues to deepen the cut in direct subsidies, one of the requests that Vox already made in 2020 to support the accounts. The budget for these aid goes from 47 million to 25. This year the scissors have already been put to reduce them by 16 million. Almeida assured in an interview this weekend with Efe that the measure responds to “one of the hallmarks” of his Executive and “it is not an early concession to Vox.” The Consistory also increases spending in the districts, which goes from 706 million to 770. The most benefited are Villa de Vallecas and Latina. The Executive has highlighted that the budgetary effort has focused on the nine districts of the Plan Sures to promote the southeast of the capital and reduce the gap within the capital.

For Más Madrid, the budget project will generate “debt and deficit” to “finance tax gifts to the most favored parts of the city.” “Despite the huge surplus inherited from the Manuela Carmena government and having all the spending possibilities of the central government, this year does not draw any new city project,” lamented councilor Jorge García Castaño.

The socialist group has accused the municipal government of “unfair” before the end of the presentation of the budgets because, according to the mayor Enma López, they have learned from the press that they were going to be approved this Monday. Later, the councilor has valued that the project “lowers taxes on those who have the most” and has assured that “there they will not find the socialists.” “They are going to have to choose whether they are with the extreme right or with the left, what we want is for there to be truly social Budgets that correct the shameful inequality that exists in Madrid,” added López, who considers the items dedicated to rebalancing insufficient territorial and employment.

Vox has taken advantage of the budget presentation day to charge against the tax ordinances drawn up by the City Council a few weeks ago. The rupture of Casado and Abascal has strained the relationship between the partners in the City Council. The far-right party has already issued a notice voting in the last plenary session with the left on all the initiatives. However, the mayor trusts that Vox ends up supporting the accounts and asks the opposition not to put the “bandage before the wound” and room to negotiate.