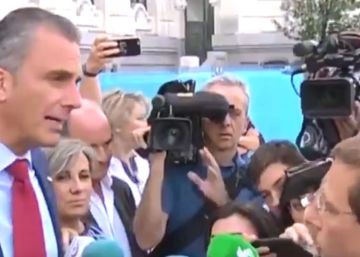 Vox boycotted this Thursday the minute of silence in memory of the most recent victim of the macho violence in Madrid. All political groups had congregated at 12.00 to pay tribute to Adaliz Villagra, 31, the woman killed by her ex-partner in the presence of her two daughters on Tuesday. A few minutes before, Vox councilors appeared with a banner that read: "Violence has no gender." The popular mayor, José Luis Martínez-Almeida, faced Vox spokesman Javier Ortega Smith in the middle of the street and urged him to join the consensus in the fight against this type of violence.

The municipal group of the far-right party had announced a day before that it would not join the act of homage, which it described as "an advertising campaign on the left." This Thursday, however, at noon, they appeared before the Palacio de Cibeles with their banner, in which they advocated fighting “against all types of domestic violence”. This boycott is common in the far-right party in other municipalities, but this Thursday it crystallized in a live televised row with Almeida.

Seeing the protest of Vox, Almeida approached the group of councilors. Ortega Smith, general secretary of the party and deputy in Congress, reminded him that his party is "against all violence" and the "discourse of gender ideology, which is what marks the left." The mayor agreed that he is also "against the ideology of gender and feminism of 8-M" and that he shares the need to fight against domestic violence. But Almeida added that "it is an incontestable reality" that 20% of violent deaths in Madrid "respond to the murder of women." "The mayor is not going to tell me that you only have to protect who in the statistics is the majority," Ortega Smith replied.

"You know perfectly well that I am not telling you this," Almeida continued. “This is a dramatic reality, the first cause of violent death in the city and the Community of Madrid, and requires an agreement and consensus; and I would have liked you to have told me unless you came with another banner. ”

Ortega Smith, in an increasingly uplifting conversation, criticized the banner held by other political groups, which read "Enough is enough! No to gender violence. ” For the far-right party, it is “the one that puts the left”. "The one that puts the City Council of Madrid," settled the mayor.

The Madrid City Council has initiated a round of consultations with all parties to sign a city pact against gender violence. Vox has taken off that search for consensus and He did not attend the meeting he had been summoned. The far-right party is unmarked not only from that local pact. “The specific characteristic of this type of violence, specifically recognized by international organizations such as the UN and the Istanbul Convention, is also recognized by our Parliament,” recalls Judge Immaculate Montalbán. "The data is very stubborn and demonstrates the reality of a specific violence against women that culminates in femicide," adds the former president of the Observatory against Domestic and Gender Violence of the General Council of Judicial Power.

The agreement of all Spanish political parties crystallized in the Comprehensive Law against Gender Violence of 2004 and in the 2017 State Pact. That consensus "has allowed very important advances that we cannot stop," says the expert on prevention of sexist violence and professor of Educational Psychology at the Complutense University. "It has even allowed us to achieve the lowest prevalence of gender violence, together with Austria in the EU." Therefore, it emphasizes that "Spain must maintain that general consensus."

Vox often argues, as it did this Thursday, that the law discriminates against a part of society. "The Constitutional Court has said on numerous occasions that the Comprehensive Law against Gender Violence does not discriminate, but rather establishes measures for a situation in which women are in a disadvantaged position within the marital or analogous link," said the magistrate. "Whoever claims that there is discrimination against other groups, ignores the penal code and ignores the functioning of our judicial bodies," adds Montalbán.

The lawyer specializing in cases of violence against women, Amparo Díaz, also warns that the discourse of the denial of the extreme right “generates a lot of apprehension in women when deciding to report, because they fear meeting denialists who attend in police stations, courts, etc. ”. The lawyer also criticizes that Vox frames sexist violence as part of the intra-family, to "downplay the violence we suffer." Montalbán warns of the importance of “not to confuse concepts, because then we cannot make an effective diagnosis or apply suitable measures”.

The four Vox councilors were decisive to invest Almeida as mayor and Begoña Villacís as vice mayor, and will be again to approve budgets, but the far-right party remains in opposition. In response to sexist violence, his views seem irreconcilable, although the vice mayor of Cs, invited Vox on Thursday "to reflection." "There is still room for us to agree, for us to negotiate," Villacís said of the agreement under which he is working.

The spokeswoman for More Madrid in the City Council, Rita Maestre, said: "I do not intend to devote a single second to people and parties that deny sexist violence and are not able to empathize with the pain of the victims and their families, but what happened today is a shame. " The councilor recalled that "without those votes that today deny gender violence, that today steal compassion to two girls who have lost their mother, murdered in front of them," there would not be a government of PP and Citizens in the City Council. The support of the four councilors of Vox was essential for Almeida to achieve mayor's office on June 15.

Pepu Hernández, spokesman for the PSOE in the City Hall of the capital, has been "tremendously outraged" with the performance of Vox who, from his point of view, lives "mounted in the scandal." Hernández considers it "incredible" that this party has so little sensitivity, "not only as a political group, but personally." "In politics, not everything goes," he said.

The virus is also controlled from home