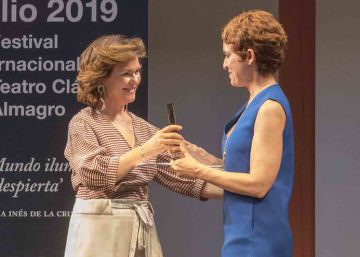 The International Classical Theater Festival of Almagro (Ciudad Real) has achieved in four decades something that is only found in scenic summer shows, mainly European and very punctual. We should remember the festivals of Avignon, the Fringe in Edinburgh, the one in Stratford-upon-Avon… or even the Colombian Bogotá. All of them involve an entire city, its inhabitants, its public and private spaces, as an active part of a sample that radically transforms the life, the urban landscape, the gastronomy and the economy of these places.

Almagro has gone from being a beautiful city of La Mancha for centuries linked to the order of Calatrava, to German bankers and -from Arab times- to its famous aubergines, to become the world capital of the Baroque theater, without forgetting that it has the The only corral of comedies of that era that is preserved intact and in perfect use.

The exhibition was inaugurated last Thursday, with the delivery of the 19th edition of the Corral de Comedias Award to actress Adriana Ozores, who received it from the hands of the Acting Vice President of the Government, Carmen Calvo, in the presence of the acting Minister of Culture José Guirao. An act that also served to make visible, through numerous public and political positions, the support, more or less decisive, that this festival currently has, to which different entities are added. Before, the delegation formalized, with a plaque included, that the Hospital de San Juan theater, which, as National Classical Theater Company (CNTC), I think the disappeared actor, author and director Adolfo Marsillach, take his name. The walk through the town also included a visit to the exhibition Art and provocation. The song as a scenic genre, where the figure of the great Miguel de Molina stood out. There was no time to see other interesting samples that complete the festival's program, such as the one dedicated to Marsillach's relationship with the classics, the Voices for Sor Juana, the brought of the Quadrennial of Prague 2019 or Self-portrait in three days. Pedro Moreno.

In addition to the 19 spaces where shows are represented, there is one, above all, that constantly gathers spontaneous spectators and others full of intention. The mythical Plaza Mayor de Almagro, one of its most famous references, in which a small stage, or directly on the ground, receives daily during the festival music, dance, street performances or simply spontaneous clowns for those who never lack enthusiastically "Those crazy little ones". Among the most impressive is Taming the Tarasca, a parade originating from European popular culture that the medieval tradition installed especially in Castile and Aragon and in the processions of the Corpus from the thirteenth century until its prohibition in the eighteenth. Along with the Tarascan, Mexicans also performed in that space Devils of Teloloapan, with its impressive masks and its sheep horns

It was not a rarity, since the festival has this year as a country invited to Mexico and, above all, to its most illustrious Baroque writer, Sor Juana Ines de la Cruz, who arrives in Almagro surrounded by other compatriots and whose beautiful endecasílabo 'El Illuminated world and I awake ', with which he finishes his work First dream, has been chosen as the motto of this 42nd edition. Sor Juana will be known not only through her poetry, but also through her theater, her music and her gastronomy, as could be verified these days with a concert by the Mexicans Casa de Maniobra, based on poems by the writer, which also inspired a sound fiction of RNE, as well as Juana Inés, acclaimed show with choreography and dancing by Carmen Cortés and directed by Carme Portacelli. And other assemblies will be parading until the closure scheduled on July 28.

"Edition 42 is an important advance in the dissemination of this heritage written on both sides of the ocean and shared by more than 500 million Spanish speakers, which has its sanctuary in Almagro," says Ignacio García, director of the show, "where he has comedy, drama, mysticism, lyricism, music, dance, picaresque and the sacramental auto ", as the one offered on the street by the Madrid Theater Institute with a historical reconstruction of the loa of the auto sacramental of The life is dream, by Calderón, from which the whole piece was also represented and where issues such as: what meaning brings us closer to reality? or what is the main food of the spirit?

In addition to the assemblies in which the protagonism rests with Sor Juana Inés, this first festive weekend also hosted a work by Ruiz de Alarcón from the Guerrero theater collective and a proposal that united verses of the two great classics, Cervantes verses Shakespeare. Also outside of our borders was the praised work of the Polish Theater Jan Kochanowski Daughters of the air.

Of course, the National Classical Theater Company does not miss its summer venue, this time with Punishment without revenge, by Lope, in a version by Álvaro Tato and directed by Helena Pimenta, that will remain until the 14th. Renewing a poster, the Calderonian enters on the 19th The daughter of the air, versioned by Benjamín Prado and directed by Mario Gas. And we have seen only three functions of the delightful staging that La Joven (as the emerging company of the CNTC is called) has made Disdain with disdain, from Moreto.

After the paseíllo almagreño authorities, with Carmen Calvo and José Guirao at the head, the role went to the honoree Adriana Ozores, who confessed that he learned what was his trade with capital letters in the National Classical Theater Company (CNTC): " I wanted to look for that other window of this profession that the Ozores completed us very well, "he said in reference to his family had traveled more for comedy. Although his great-grandparents came from the world of zarzuela, then they went focusing on the theater and the last generations in the cinema. His grandparents, his parents, José Luis Ozores and Concepción Muñoz, his uncles Mariano and Antonio Ozores. She is also cousin of Emma Ozores and sister of the twins Mariano and Pelayo, dedicated to the world of cinema. And there is even more if we get out of the direct line.

Ozores listened to the edge of the tear the laudatio that his friend the writer Elvira Lindo did, which further highlighted the intentionality that the show this year was carried out by women.

Lindo called the award-winning "actress and brilliant, stubborn, hardworking, non-conformist, studious woman, in which thanks to the classic theater you would become". He said that Ozores would have been a great actress anyway: "But an actress is defined by the projects she embarks on and you joined one of the most excellent ones in the recent history of Spanish theater (in reference to the CNTC) … .., because while you gave yourself, and deliveries, generously to interpret the life of great women was being built in you a precious, delicate and tenacious human being, that is worth knowing ".

The actress also spoke of her work with the greats when she chose to do classical theater: "They dared to show besides their greatness, their fears and insecurities … Marsillach, Jesús Puente, José Luis Alonso ….". Of all told anecdotes and added: "I am what I am as an actress, and how I am, for those years in the CNTC and those summers in Almagro."