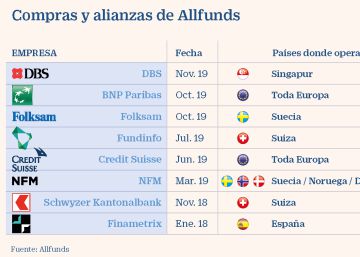 The listing of Allfunds has made the market greedy. So much, that it is possible that it will not even occur. Various private equity They see margin to make money with the fund platform and have offered to buy 100% from their current owners, according to financial sources. These indicate that the launch of the auction will take place in the next few days. The firm’s preliminary appraisal for the IPO ranged from $ 4 to $ 7 billion.

The cake is so palatable that some prospective buyers don’t want to share it. The IPO of Allfunds, scheduled for this year, as published by CincoDías on November 25, has become a dual track, a competition with a pure and simple M&A operation. Again, the liquidity of private equity rivals that of mutual funds. It remains to be seen who triumphs, but for the moment both paths are open. There are already interested parties, and the offer period is about to begin. The sources consulted indicate that, if nothing goes wrong, everything will start next week.

Allfunds has become a giant in the intermediation of investment funds with a net worth of more than 1.2 trillion euros and some 2,300 entities in 55 countries that use its infrastructure to market portfolios of more than 5,000 managers around the world. It is the de facto control of the global fund industry, which, despite the Covid tsunami, has weathered through thick and thin.

Furthermore, Allfunds is very profitable, with a net operating profit in 2019 of € 83.4 million. It fell by 33.6%, to 83.4 million, although this fall was due to 35 million used precisely in the integration of the platforms of the banks of French and Swiss origin. The sources consulted do not even rule out that an industrialist – read, a firm in the financial sector – is interested in the auction.

The truth is that the growth of Allfunds since its new shareholders took over has been unstoppable. Either with an exchange of shares or at the stroke of a checkbook (see graph), it has almost quadrupled the assets of just over three years ago, when it had about 350,000 million.

The desire of certain investors to take control of Allfunds jeopardizes the possible IPO – the debut was scheduled in Euronext -, which the two shareholder banks, BNP Paribas and Credit Suisse, were destined to pilot. Talks had also begun with other entities, such as Citi and Morgan Stanley, the best positioned to accompany them, according to Bloomberg.

The outcome will depend on the price and degree of interest of current shareholders in remaining in the capital. An IPO would allow H&F and GIC, as well as BNP Paribas and Credit Suisse, to cash in. But, at the same time, these last two banks would have a casting vote in the Allfunds strategy, key in the sale of their own funds, although the platform has always shown its independence, even when it was controlled by Santander AM, with 25%, and by Intesa Sanpaolo (50%). The auction opens the door to consider the possibility of incorporating new financial partners to take the witness of the private equity and the sovereign fund.

Forks. Allfunds’ preliminary appraisal was between 4 and 5 billion, but this has been rising like the foam. A few weeks later, the investment banks involved in the operation placed the valuation at a minimum of 7,000 million euros. This price supposes to multiply by almost four the 1,800 million that were paid a little more than three years ago.

The appraisal has been growing at the same rate as the assets under management of the company. Hellman & Fridman and GIC also executed the purchase with a high degree of leverage. They issued 575 million in bonds to finance it. These securities, which pay an annual interest of 4.125%, traded yesterday at 101.8% of the nominal. If the sale of Allfunds occurs, it is foreseeable that these bonds will be amortized in advance. In principle, its maturity is scheduled for August 2024. In fact, the issuer of this debt (LCH3), controlled 64% by H&F and 36% by GIC, is the one that owns 63.55% of Allfunds . BNP Paribas and Credit Suisse are directly involved in the platform.