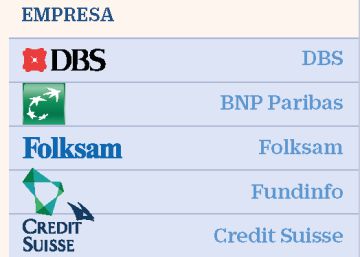 The Spanish company Allfunds has launched 12 investment funds with its own brand, Allsolutions, under the Luxumburg sicav format. They will be available in April. Before the end of the summer it will register another 18 vehicles. The company undertakes this movement on the eve of its IPO, which could value the group specialized in brokerage of investment funds at 7,000 million euros.

Until now, the great strength of Allfunds was to have become the world benchmark platform for contracting investment funds. Not by individuals, but by large institutional investors, such as banks, insurance companies and other funds. The entity distributes almost 90,000 products from 1,665 managers, and with an aggregate equity close to one billion euros.

Until now, Allfunds always intermediated third-party funds, but now it is starting to offer its own investment vehicles, with delegated mandate. The entity has launched Allfunds Investments Solutions with which it will have 30 management mandates for different types of assets. Thus, for the debt of emerging countries, the management of the Allfunds fund will be entrusted to Goldman Sachs; BNP will manage investments in the China Stock Exchange; Franklin, the United States Stock Exchange ...

With this move, a private banker who wants to recommend a client to make a tactical investment in the China Stock Exchange, for example, can go directly to the Allsolutions China fund, instead of having to do a check on all the funds that invest in it. Asian country to recommend one to you.

The CEO of Allfunds, Juan Alcaraz, explained during the presentation of Allfunds Investments Solutions that the entity was thus entering a new phase. In its origins the firm had specialized in the intermediation of funds, later in the digitization of services and now they seek to grow "in the mandate platform, from business to business, with which we will add value to customers by increasing efficiency and complementing open architecture programs".

According to the statements made by the head of this new business unit, Stéphane Corsaletti, to the French newspaper Les Echos, the objective is that these new management sub-mandates reach a volume of 40,000 million euros, for 50 different strategies.

In these funds / sicav of Allfunds, the firm will no longer charge for the pure intermediation, but for the management of the vehicles, whose commissions are much higher. The entity emphasizes that its intention is not to become an asset manager, nor a fund distributor, but that it will remain only an intermediary. And it guarantees that it will maintain independence and avoid conflicts of interest. He ensures that these Allsolutions funds are just one more way to connect various players in the industry.

The dominating position of Allfunds in the intermediation of funds has meant that there is a lot of interest in the market to enter its shareholding. In 2019 it achieved an operating profit of 83 million euros but, after the latest acquisitions, the firm has multiplied its turnover.

The owners of Allfunds, the venture capital fund Hellman & Friedman, BNP Paribas, Credit Suisse and the sovereign wealth fund of Singapore, GIC, came to consider the possibility of carrying out a private placement of the shares, but they have finished opting to directly carry out an IPO.