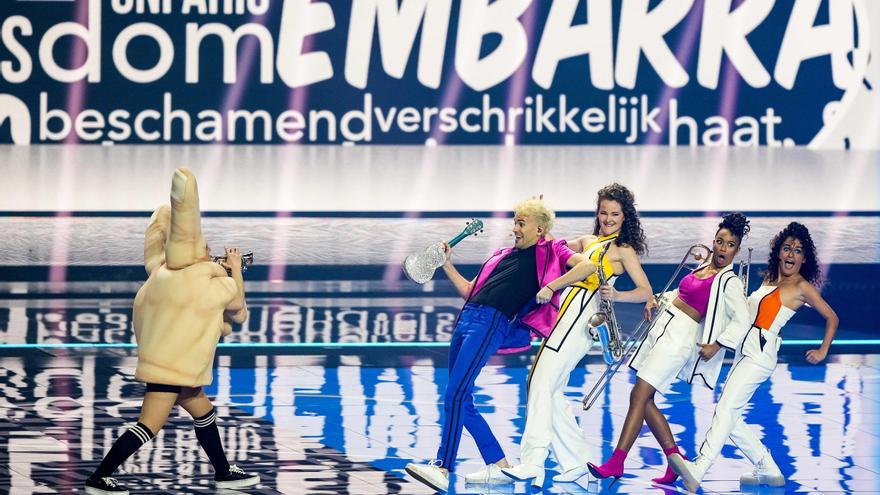 The Eurovision Song Contest celebrates its 2021 edition this week and 39 countries will be present on the stage of the Rotterdam Ahoy Dutch following disqualification from the 40th country, Belarus.

Of the participants, 16 will enter the competition in the first semifinal, 17 in the second and six (The Netherlands as host and Spain, France, Italy, Germany and the United Kingdom as members of the Big Five) directly into the grand finale.

These are the official videos of the 39 participating countries, awaiting his final performance:

The Lithuanian trio left among the favorites in 2020, before the festival was canceled. For this edition he repeats, although the forecasts do not place him so high. The country has only finished in the top ten twice.

Qualifying for the final will already be a success for a country that never finished in the top six of the festival. He also repeats artist with respect to the canceled 2020 edition.

A habitual country in the fight for the top positions in the competition, but which has not been victorious for 13 years, this year it combines the Russian and English languages in his performance.

The second country with the most triumphs in Eurovision, and one of the two that has repeated victory in the 21st century, has finished in the ‘top 10’ in eight of his last nine presences.

Sixth participation of the oceanic country that reached the second place in 2016. The bets are not favorable to them and everything indicates that they will fight to avoid their worst historical result.

In 10 of their last 12 appearances they were eliminated in the semifinals. This year’s singer did backing vocals to Tamara Todevska in 2019, in the performance that reaped the best historical result for the country.

The most awarded country in the history of the festival came last in 2013 and has since fallen into semifinals in all editions except one. Getting into the final must be the big goal.

One of the candidates to achieve a great result. The country has strengthened its presence at the festival in recent years, as demonstrated Eleni Foureira with his second place in 2018.

Winner in 2009 and regular of the ‘top 10’ In the last decade, its groundbreaking staging has attracted attention for this edition.

The country has only gotten into the final in two of his last eight presences at the pageant. His song this year will combine the English language with the Croatian.

Have passed 35 years of the last Belgian victory and 18 of his last second place. He has not stepped into the final in his last two appearances in the competition.

Winners in 2018, their presence always lifts controversies by the political and social situation of the country. Bet on an impressive scenery to return to the top positions.

Like Belgium, its last two appearances have ended in the semifinal. His best results were third places in 2005 and 2010.

It is a decade since its historic triumph with Ell & Nikki. In their last six appearances they have failed to enter the top seven.

With their wins of 2004 and 2016 they became the second country to repeat victory so far in the 21st century. To date, the country has never lost in the semi-final.

One of this year’s top favorites despite never having won the festival. Your interpreter, Destiny, already won the junior festival in 2015 and attended in 2019 as a secondary voice.

The small country, which started participating in 2008, has barely passed twice to the end. Betting gives them options to beat their best all-time result.

Are fulfilled Two decades of his only Eurovision triumph. Forecasts for this year make it difficult for them to get among the finalists.

Finalist only in three times, all of them in their last four presences. This year repeating the final would already be a good goal.

The singer, just 18 years old, represented the Netherlands in the junior competition 2015 having been born in Utrecht. Now he will carry the flag of the country of his family origins, which since 2013 has barely exceeded 20th place with difficulties.

Another that repeats its presence after acting in 2017 as a secondary voice. The country achieved victory in 2014 with Conchita Wurst and finished in third place in 2018.

His presence leaves with difficulties having suffered coronavirus cases on the dates prior to the festival within the delegation. The country debuted with a brilliant second place in 1994but since then he has not finished in the top six again.

Fifteen years later, a singer returns to the festival who already participated in 2006. The third place of 2017 should be the reference to follow.

One more of the countries that start as favorites, the second places of 1999 and 2009 they are its historical top.

The band that last year thought to interpret their theme ‘See you around’ repeats title in Spanish with ‘Loco Loco’ with the aim of emulating his historic triumph in his debut in 2007.

After three consecutive editions without reaching the final, this year it would be a surprise if they did, by starting with Spain in the last places of the bets.

A discreet scenery for a country that has only finished in the top ten in two editions of the festival.

With the success of Salvador Sobral still recent, this year they change their register, but without being excessively risky, after the 2019 fiasco, when they did not get to enter the final.

29- Bulgaria (Victoria – Growing up is getting old)

Seconds in 2017, They accumulate three finals in a row after failing to reach her in any of their seven previous appearances.

Reissue the ‘Lordi ‘effect, who is now 15 years old, it seems the goal of this band of ‘nu metal’ that will try to break the streak of a country that has only entered one final of the last five editions.

Far is his triumph in 2002, in his third appearance at the festival. Of his last eleven appearances, only in two did he step into the final.

One of the main candidates to victory, despite his poor historical results (only three finals in his last thirteen appearances).

After winning in 2014, they do not appear this year in the forecasts for victory. Repeat duet, as they intended to offer in 2020, but changing its protagonists.

As it is almost tradition, Spain does not appear among the candidates to achieve good results in Eurovision. Blas Cantó, who could not sing in 2020, repeats with the support of TVE.

As it happens to Spain, another of the nations’historical‘of the festival that does not usually obtain remarkable results.

The big favorite In all bets, he has dazzled in the weeks leading up to the festival, with a risky and romantic bet at the same time.

In four of the last five editions it has ended from position 25 down. And according to the forecasts of the fans, it does not seem that this year his result is going to be much better.

Another of the preferred by fans in the weeks leading up to the contest. About every four years, the country finishes in the top three. It would not be until 2023, but the bet this year is strong to break the series.

The host It is not usually a great candidate for victory, but after the 2019 triumph and its role as organizer, the party in the country is assured.

Telecinco continues to bet on ‘My house is yours’: announces a new installment with Paz Padilla