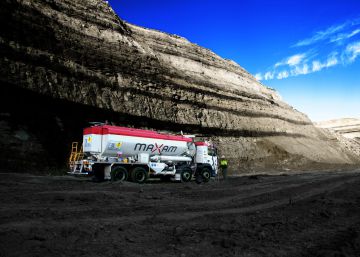 On August 14, 2018, the Morandi Bridge collapsed west of Genoa leaving 43 dead. Hard images that were recorded forever. The Spanish company Maxam participated in the controlled demolition of this construction last June, “where our 1,000 electronic detonators and our technical advice were decisive factors for the success of the operation,” they explain from the company.

Maxam's trajectory runs for three centuries in which he has changed his name several times: founded by Alfred Nobel in 1872 as the Spanish Dynamite Society (SED), it became a Spanish Union of Explosives, then Riotinto Explosives Union and in 2006 Maxam. Name changes that address merger processes and new approaches of the company that now divides its activity into four parts: blasting solutions, cartridges and components, defense and security, and nitro chemical products.

A company that faces new challenges, such as the recent installation of a factory in China and a major shareholder change. In August of last year, the fund Advent International sold your participation of 45% in Maxam to another venture capital group, Rhône Capital.

In 2019, in addition to the controlled blasting of the Morandi bridge, Maxam has participated in international projects, such as the extension of the port of Singapore – “consisting of winning 294 hectares to the sea for the construction of a nine-kilometer dock and which is the largest blast underwater developed so far "- and the construction of the Brenner tunnel -" the longest railway tunnel in the world: 64 kilometers across the European Alps "-, indicate from the company, based in Madrid.

Maxam began its internationalization process in 1988 and currently less than 10% of turnover comes from Spain. And in this search for new markets, Maxam's management team, with its president José Fernando Sánchez-Junco in charge, was returning at the end of last October to inaugurate a plant in Shandong (China) together with local partners, Shandong Tianbao and Weihai Yuiboqiang . A 455,000-square-meter factory that has the capacity to produce 10,000 tons of encapsulated hydrogel and 60 million detonators per year. "It means the effective consolidation of our presence in Asia and there we will produce some of our latest technological solutions for mining, quarries and infrastructure," explained Maxam.

The commitment to China with an estimated investment of 70 million euros is due to serve the largest consumer of minerals in the world. “China is one of the largest and fastest growing civil explosives markets. It is the largest producer of coal (46%) and rare earth (80%) and leads the extraction of other minerals considered strategic, such as graphite, vanadium, Indian, tungsten, gallium, antimony, tellurium , cadmium and molybdenum. ”
Sales of 1,130 million

And this emporium of explosives – now euphemistically called energy material – offers figures of an Ibex 35 company. Maxam has 140 subsidiaries, is present in 50 countries and develops commercial operations with another 100 countries. It employs 6,500 workers and has 80 industrial plants. It is the first operator in Europe and the second largest in the blasting solutions segment. "We collaborate with the largest mining companies worldwide." Your billing and benefits are also those of a great company. At the end of the fiscal year in March 2019, its turnover was close to 1,130 million, with a profit of 166 million.

From Maxam they hope to maintain the pace of expansion over the next few years: “Our main activity is the development and application of blasting solutions for mining, quarries and infrastructure. There is a global trend that throws great growth opportunities for the mining sector, ”they argue. “In the first place, the advancement of the world population, urbanization and the increase of living standards will continue to generate an increase in the demand for minerals in the coming decades. On the other hand, new technologies demand an increasing consumption of metals such as gold and copper ”, these sources add.

Maxam has two large groups of shareholders. 55% of its capital is in the hands of company executives grouped around its president and CEO Sánchez-Junco, and 45% is controlled by Rhône Capital. He joined the company after the sale of Advent International estimated at about 600 million euros and to which other investors presented themselves. BC Partners and Wendel Group were, according to market sources.

In this sales agreement, according to Maxam, the management team did not intervene but was a negotiation between both parties. “We are confident that the new Rhône Capital investor will work with the management team and contribute to growth. We have a long history working with venture capital companies that, successively, have been part of our shareholding and have always supported our strategic and growth plans, ”they explain.

The relief in his partner does not obey the financing needs of the company that, he explains, signed a syndicated loan for a total of 600 million euros last July that “provides us with long-term financing to develop our consolidation strategy as a global company. " From Maxam avoid commenting on a possible IPO of the firm which, according to the latest exchange of shares between venture capital, involves valuing the company at around 1.4 billion euros, a sufficient figure to be among the largest in the Spanish market.

In 1872 the Swedish Alfred Nobel – inventor of dynamite and creator of the prizes that bear his name – founded the Spanish Dynamite Society (SED) in Galdácano (Vizcaya), origin of the current Maxam. The company has 117 professionals dedicated exclusively to R & D & I in four technology poles. The Technological Center of Propellants located in Murcia and unique in Europe, and the Technological Center of Energy Materials in Burgos stand out. “The innovative and entrepreneurial spirit of the founder of the company is still present today. One of Alfred Nobel's greatnesses was his ability to combine the mind of a scientist and an inventor with the dynamism and industrial focus of an entrepreneur. Nobel believed that the future is only possible through constant progress. We combine our technical and technological knowledge with innovation, ”they say in the group.