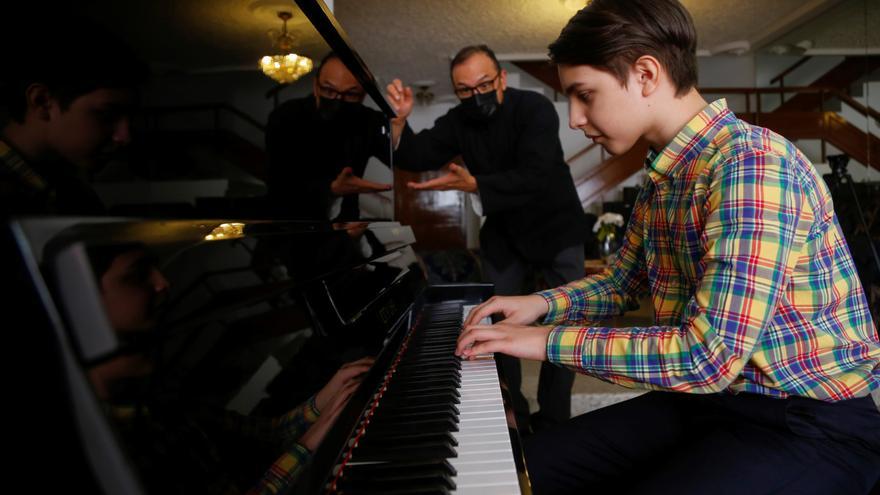 Guadalajara (Mexico), Apr 3 (EFE) .- At 12, Mexican Alexander Vivero is a multi-instrumentalist, has won prestigious international piano competitions, composes and conducts, as well as playing video games and setting a record of excellence in his school life .

In the living room of his house, the adolescent from the city of Guadalajara, in the western state of Jalisco, confesses to Efe that his taste for music comes from a very young age and from the age of 4 he learned to play the piano , an instrument that has taken him to Europe and the United States.

“What I love about music is that it is a new language in which I can express my ideas, my emotions. In the case of my work ‘El circo’, I start looking for harmonies, essences that the circus invokes me and that is what I like about composition and music, being able to take people to places “, says the boy in an interview.

From a dental mother and a civil engineer father, the young promise of music claims not to know where the artistic gene comes from, since none of the members of his family dedicated himself to this profession before, but they did support him to promote his taste for music. Arts.

With unusual intelligence, the boy speaks three languages ​​and studies Italian, as well as playing instruments such as drums, guitar and percussion.

At the age of 6, his first work for piano “La Ardilla Jumping” was presented at the Roberto Cantoral Cultural Center in Mexico City and at nine he won an international children’s competition in Spain with his work for piano and three violins “Traviesa droplet de rain”.

Recently the Chamber Orchestra of Zapopan, neighboring city of Guadalajara, the state capital, premiered its first work for orchestra called “El Circo”, a piece that reopened the cultural billboard of that Jalisco municipality after several months due to the COVID pandemic -19.

The boy divides his time between his online classes, playing video games and doing his daily piano practice, which is usually two hours or even six hours when preparing for a competition.

Smiling and conversational, Alexander reveals that he just finished “Murder on the Orient Express” by Agatha Christie, a book that he liked so much that it inspired him to write his next work, a process that seems simple to him.

“It can be something very simple like my first work that came out of a squirrel that was jumping through the trees, an idea comes from there, something that catches my attention, I start to imagine how to put it to music and I start looking for what can work and what things I have learned can I use and from there he started to put the work together “, he says.

A month ago, the young man won first place in the American Protégé International Music Talent Competition, held in New York City, which will allow him to fulfill one of his dreams next October: to offer a gala concert at the Carnegie Hall of that city, one of the most important forums for music.

Also last October, Alexander won the Virtuoso Grand Prize in Bonn, Germany, which will give him the opportunity to debut in one of the most important venues in that German city, next December.

For his teacher, the musician Joel Juan Qui, Alexander’s talent “is exceptional”, because thanks to his sensitivity and keen musical ear, he has achieved in less than a decade what would take any other musician at least 20 years.

He says that from the first moment he knew that he was not a child like the others, because he showed confidence and desire to learn to improve himself, so he took him as a student and prepared him for competitions in Germany and the United States.

“He is a different student, very aware of what he wants at that age, he told me that he wants to be the best conductor in the world, but that he had to be a good pianist before achieving it and that is what we are doing, a continuous work arduous and we have taken his teaching to levels of excellence, “said the teacher with 20 years of experience.

Alexander considers himself a “teenager with a normal life” in which he lives with his friends, goes out to have fun, and struggles to keep up at school.

Proud of his roots, the young man assures that he wants to study abroad and spread the richness of Mexican popular music so that it is recognized in the world.

“I would like to be an orchestra conductor, to be able to study in Germany and to be able to take Mexican culture to the world, I would love for it to become known more. Mexican folklore makes me very nice all the variety that there is in different places, all the rhythms and I think we have to make it known to the whole world, “he concluded.