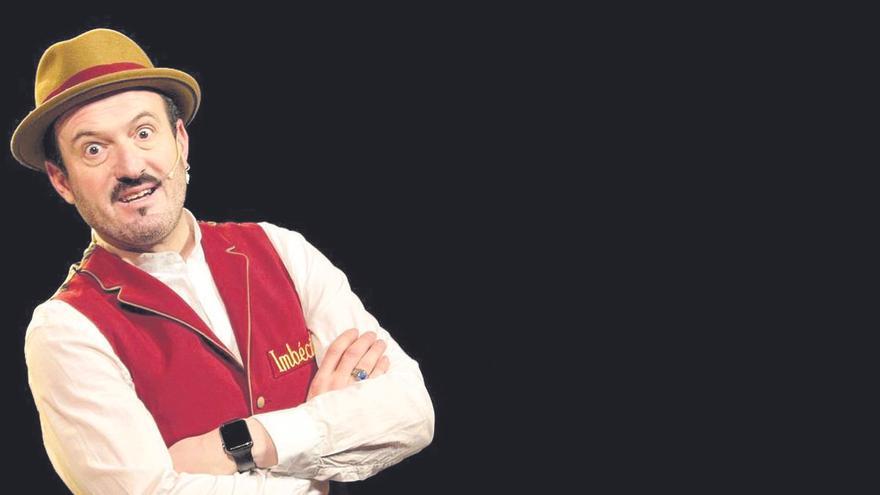 The humor It shouldn’t have the current restrictions. “People have too thin skin”, laments the artist Alex O’Dogherty, which claims in its last show, Idiot, the value of the word and how it can be turned into a real weapon. The actor and comedian from Cádiz will be presenting it this Friday at the Regional Library of Murcia, where it will offer two passes with free entry until full capacity: one at 6:00 p.m. and another at 9:00 p.m.

Why did you decide to give your latest show such a shocking name?

Actually, the first thing I had in mind was the title. I had been wanting to name a show like that for fifteen years; I couldn’t explain why, but it seemed funny to me. Then when in the summer of 2019 I sat down to write my next show, I knew I would talk about words, and when I finished writing it all made sense and it was titled like that. It may have come in handy, because there will be people who have been amused by the title and approach it, although the opposite may have happened to others. But today, after more than two years and having done more than a hundred functions, filling 90% of them, I dare say that it was a success.

Could you say that it has become one of your fetish words?

I knew I was going to keep something in there if I couldn’t get a job done with this name, and I’m so glad I took the step. I am very proud of a show that, moreover, I like more and more. It is the most difficult I have done in my life, the one that has cost me the most to write, study and perform live, because it has a lot of technical difficulty: not only combining everything I say with very fast word hieroglyphs, but because you have to add the music I do live and the images projected behind me. Perhaps, seen from the outside, this difficulty is not recognized, but there is also the magic, that all the work behind it does not appear and that, simply, people enjoy it.

It is much more than a monologue to use. Are you really comfortable on stage?

At the end of the day it is my condition, with more than twenty years doing monologues. I have a particular way of acting and whoever likes it, let them know that they will always find this style.

Have you done a kind of catharsis with this work, analyzing the theme of humor?

That’s right, because I have managed to reflect many things that I wanted to tell and that worry me, such as those limits of humor, what people allow themselves to say or not. All my shows have been somewhat therapeutic for me, but this one much more, because I talk about how words affect me.

Up to what point?

In previous years, with the boom in social networks, a space has been set up to speak anonymously and insult that has made me have a really bad time. So this show has been like therapy for myself, to try to make words stop affecting me so much. For now, I think I’m on the right track and it also helps people to reflect. Always in my comedies I try that, in addition to laughing, they think, come home and comment. I like to deal with issues that concern me and that the people who listen to them ask things, whether or not they agree with my arguments.

How is it possible that there are more restrictions on humor now than forty years ago in this country?

I don’t know … But personally it seems to me that we have all become much more delicate: suddenly, everything affects us more. I don’t know if in the eighties people were raised differently, but now we are seeing the results of that upbringing with such delicacy, telling our children that they were untouchable. When someone messes with something of theirs, they cry and kick, but now also, if they can, they ask for the head of the person who said it. Precisely that theme draws attention in my show: why words affect people much more than the facts themselves, why comedians are persecuted much more than comedians. politicians, for instance. The issue of the limits of humor is summed up in a maxim that I present in the show: you can mess with whatever you want, except mine. We must be aware that there will be things that we do not like, but we cannot prohibit them, especially in the field of humor. There are things that annoy me, jokes and comedians that I hate, but I don’t ask for their head, I just don’t follow them. As simple as that.

Have we improved anything in recent times?

Nothing has changed, I do not notice any improvement, the skin has not thickened one millimeter. This show is not going to go out of style, because, somehow, to a greater or lesser degree, there are always going to be susceptible people. The latest cases of comedians like Dani Mateo, Rober Bodegas or David Suárez, who have been stigmatized, seem unfair to me. We are living in a time of vendettas, but they do not focus precisely on people who are really doing harm …

You premiered the show in January 2020 and the pandemic arrived, how did you adapt to the situation?

The moment the confinement was over I started bowling and had to adapt to less public and with face mask, but it was better than doing nothing, so we have to give thanks, because at least I was active and doing what I really like. I have considered everything that has happened to me almost a blessing, because as we have progressed, we have had more public and more bowling. Now I just wait for the day when I can see the public without a mask.

All-terrain artist with a 24-year career, are you where you dreamed of when you started?

I’m not in the place I imagined, but these things are changing. I enjoy where I am and even more after what has happened … My life has been put in a certain order and it has made me feel serene and happy With what i have. I have created board games, I am recording an album with my band, I have written a series that I will try to carry out … I have created, without realizing it, a world around me that only depends on me.

Tags: Alex, comics, I get it, odogherty, pursues