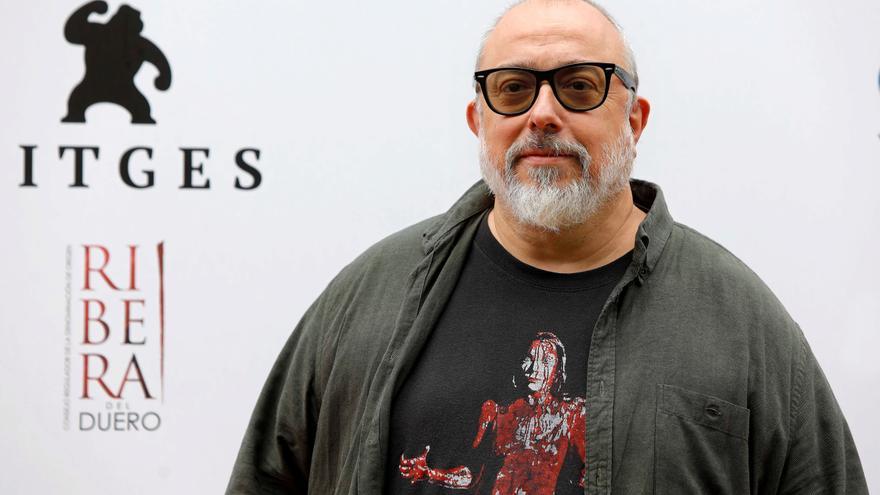 Alex de la Iglesia shoots the second season of 30 coins, premieres his new movie, Veneziaphrenia, and he already has the next one ready. Also, with his production company does not stop raising projects risky and different He is a workaholic. To tell stories and allow others to tell them. With his new film, he does so by inaugurating, in addition, a label called The Fear Collection, which, together with Sony and Amazon, will produce horror films. He has given the starting signal, and in the past Sitges it was announced that Jaume Balagueró would take over the baton.

Veneziaphrenia, which opens this Friday after several delays due to the pandemic, is a political 'slasher' shot in Venice. A murderer who kills tourists in a sinking city because nobody takes care of it. Blood and social criticism go hand in hand, as the tradition of the genre dictates and as he has shown in a career that is the history of Spanish cinema thanks to titles such as The Day of the Beast, The Community or Sad Trumpet Ballad.

Venicephrenia is finally released after several delays due to the pandemic. Were you afraid that she would stay in a drawer?

Now everything is so unstable and terrible that of course I was terrified. I would have liked to release it after Sitges, but Sony knows more than me and has considered that this was the best time.

Has everything changed a lot since you started as director? I mean, before it was clear that he was shooting a movie and releasing it in theaters, now that path is not so clear.

I'm not nostalgic about it. I think this is the best time of my life. I am working harder than ever and have more control.

Veneziaphrenia has an underlying idea, which is tourism-phobia. I don't know if that's the starting point of the movie.

There is a kind of personal humiliation, because I am a tourist. I've been going to Venice as a tourist since I was 18 and I've been there a lot for the festival. I've been with The Day of the Beast, with Crimen Ferpecto, with Sad Trumpet Ballad... I've experienced a lot of Venice. The film comes from a very basic idea, which is that we destroy everything we love. It is something that I have been realizing over time and Venice was a perfect example to build a farce on that, because everything we love and respect ends up being destroyed in our hands because we do not have a global vision of things, but rather we we have become children who play and who wait for their special moment, and even if you tell them not to step on it, they step on it, because it is 'my moment'. We only value that story that we have been sold that we are special.

Terror as a way of talking about us, this is a political 'slasher'.

Yes, it is political terror.

It has always been like this? In the press we say it a lot lately, but I think that terror has always taken the pulse of what happens.

Yes, but things are how people see them. They are not in themselves, they are how the public sees them or according to the image of them reflected in the people who observe it. There is a time when terror is entertainment until one day someone discovers that Last Earth is not just a movie about an invasion, but has to do with nuclear war, and that others like Night of the Living Dead Suddenly he is talking almost almost about xenophobia, about a main character cornered by white zombies. Everything is politics. There is nothing that is not political. All my films have a vision of what surrounds me, and therefore they are political.

His films have been in competition at festivals such as Venice. Last year Titane won the Palme d'Or... Has the prejudice towards horror films by festivals been broken?

The festivals are running out of that argument born in the 60s. That art and essay film argument is an exquisite corpse and they have to look for another story, and they are finding it in terror. Titane is a horror movie, it's a Sitges movie. A movie that may not win in Sitges because there are many like it.

What is it like to shoot in Venice in the middle of a pandemic, is it like a horror story?

Everything related to Venice has a magical and necrophilous point. We roll as if there was no humanity. Venice was completely empty. There were very few people on the street, and at 5 the shops closed and everything was empty, and we were filming after that time. I have had the privilege, or the desperation, of being able to cross St. Mark's Square at night without anyone there.

Exactly, one of the things I wanted to tell was that. In Venice there is a kind of blood stream. There are streets that are like bloodstreams that carry hordes of tourists, which are the ones that lead to San Marcos or Rialto, but as soon as you leave them there is nobody, and it is amazing and it gives you that point of saying, is this a decorated?

This is the first film from The Fear Collection label, which reminds me of that Fantastic Factory from Filmax. Why did you want to do this initiative?

Yes, it has something to do with it. It is a privilege to be able to have a label. Our idea is to make two films or more a year. I've done the first one, the next one is from Balagueró, and we have four or five directly from The Fear Colection label. We have also done one with Tatay of terror, which is called Jaula, and although it is not horror, but it is terrifying, we also have La piedad, by Eduardo Casanova.

The Fantastic Factory was born at a time when terror is back in fashion in Spain.

Terror has not stopped being fashionable. The most interesting thing that is being done is in terror. I'm looking forward to seeing what's new by Ari Aster, by Robert Eggers, by Panos Cosmatos... the most interesting people are doing terror.

Jason Blum says that horror is one of the genres that will survive at the box office.

Totally, because it is an experience that you want to live away from home. The box office is going to feed a lot on terror, and there will be cinemas only dedicated to terror. I would love to work in that direction.

Absolutely. I've been gathering accomplices for a long time. We can't find a way, but we will. I wish I had a special place like Quentin's.

Some remain. We have the magnificent and great Lavigne. With Enrique I have talked about it a thousand times and we would love it.

He has lived many cinema and audiovisual laws. How do you see the current moment of Spanish cinema?

I'm telling you, I'm not nostalgic. I think we live in a magnificent moment. The offer is enormous, there are more audiovisual agents than ever. Before there were only televisions, now also platforms and there are more opportunities. The televisions have put the batteries and change their content to compete with Netflix or Amazon. HBO is amazing the material that it proposes, not to mention Apple… there are a lot of new actors and that is fabulous because it improves the quality. Spanish cinema is better than ever. Sorogoyen, Oriol Paulo, Koldo Serra, Vigalondo, Balagueró, Paco Plaza… I feel that there are people making very good films

For you as a workaholic this situation is perfect.

I have the same addiction as before, but now I have a production company, and with Carolina (Bang) we are making the projects we had come true. I always commented that I had a ton of scripts that I couldn't get off the ground, and now I think I'm going to get them out.

No, but there are ideas I've had since I was little that I'm going to film.

Mariano Barroso retires as president of the Film Academy. Would he show up again?

Now it would not be possible because I have little time, but I would love to. I'm still a member and I still think it's a great idea to promote.

His speech as president was legendary. If he had to give a speech now as president of the Academy, what would it be, where would he focus?

I think what we have to do is find a way to unite to work together and have a united vision, which is something we lack. Each one is on their own, and if we could join forces we would be indestructible. And in all departments of society. I think we should unite to achieve common goals. We have a very individualistic vision of life and we should have a vision more directed to clear objectives that involve many people.