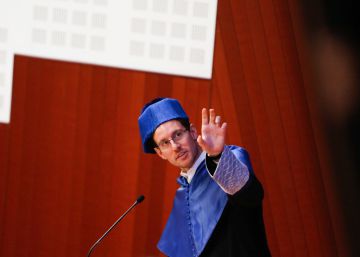 Until recently, only a small group of people knew who Alessio Figalli was (Rome, 1984). His job is to solve problems of calculating variations and equations in partial derivatives. Today this mathematician, calm and close, that the magazine of mathematical dissemination Quanta in a Article defined as "tall, elegant and fit" ("tall, fit and stylish”), Enjoys an unusual reputation among his coworkers.

In 2018 it was granted, along with three other mathematicians, the most sought-after award in the mathematical world: the Fields Medal, an acknowledgment that the International Mathematical Union confers only once every 4 years since 1936 (with a break until 1950) to mathematicians under 40 years of age. In total there are only 60 mathematicians who can boast of this recognition, among which only one woman: Iranian Maryam Mirzakhani.

Figalli, Professor at the ETH Polytechnic in Zurich, he has visited Barcelona on the occasion of the ceremony organized by the Polytechnic University of Catalonia (UPC), which has given him a doctor honoris causa last Thursday. With his usual humility, said that that day was celebrated, more than himself, "the world of mathematics" and its successes in society.

“There are many stereotypes about mathematicians,” he says, “but we are not all the same. The Medal has made me better known, it's true. Failure to follow stereotypes is positive because it helps remove that wrong and harmful image that you can only be a mathematician if you're weird. Many people have the image of mathematicians like Nash from the movie An amazing mind or Rāmānujan, who resolved at 5 years old, I don't know what problem. I did a humanistic baccalaureate without any special contact with mathematics before college. It is true that great mathematicians such as Terence Tao (Fields Medal in 2006) or Akshay Venkatesh (also Fields Medal in 2018) started college very young, but I like to think that you can have a normal life and succeed. ”

Question. What should the school teach about mathematics?

Answer. It is clear that mathematics helps us to reason and is an excellent exercise to stimulate creativity and imagination. What often happens is that in school they don't teach us to combine the different concepts. In addition, the problem is that, if one does not study during a time, it is not easy to follow, while in other subjects you can skip the gap. Therefore, it is important to repeat the key concepts a lot. On the other hand, we must also talk about applications. In many school programs, monstrous and very complicated calculations are made on subjects that have already become obsolete in mathematical research, when time could be spent on giving some more interesting elements of advanced mathematics. For example, use the concept of congruences to talk about the RSA algorithms of cryptography. Everyone can understand that multiplying two prime numbers is easy, and factoring is much more complicated, and this is what cryptography is based on. Or perhaps explain a very simplified version of Markov chains (a special type of statistical process), which explain the mathematics of Google. Or that WhatsApp messages are based on the fact that sound is a superposition of fundamental frequencies that are transformed thanks to Fourier analysis in digital signal. Mathematicians working in spaces of dimension 100 are no more crazy than anyone who takes a picture with the mobile, which is an overlay of 8 million pixels, each with its value. When we apply a filter to publish it on Instagram we work in a space of 8 million dimension. Thus, the concept of "many dimensions" is not so abstract! Without going into the details, it is worth teaching that not everything is magical, that although I will not become a scientist, I can understand what is behind things.

P. Which part of your work do you like the most and which less?

Mathematicians do not need tools or a place to work. That is good and bad at the same time: it is difficult to get an idea out of the head, our work always accompanies us

R. As an academic, my great privilege is that I have a lot of freedom to work on the problems that I like the most. And this is essential for research. All great revolutions come from creative thinking without deadlines. In addition, I like the exchange of ideas, and in general work with other people. Perhaps the most difficult part of our work is that you can never disconnect at all. Mathematicians do not need tools or a place to work. That is good and bad at the same time: it is difficult to get an idea out of the head, our work always accompanies us.

P. How is math research in the world going on right now?

R. In general, research is going very well in many countries. Italy has a long tradition and remains strong. Switzerland, like the US, still imports brains. In Zurich, 70% of teachers are foreigners. Spanish mathematics is growing tremendously in recent years. Society is changing and mathematicians are one of the most versatile and most sought after professionals. We are few, we know how to think and reason, we know how to deal with problems creatively and we learn quickly. This companies like. They are realizing the importance of mathematics and that is positive: the more mathematicians ask, the more we have to train.

Society is changing and mathematicians are one of the most versatile and most sought after professionals. We are few, we know how to think and reason, we know how to deal with problems creatively and we learn quickly

P. Talk about creativity, a term that we do not usually associate with mathematicians.

R. When you study a problem, you have to abstract the concepts you know from the formulas that allow you to interpret the world. And sometimes you have to be creative in this abstraction. An example that fascinates me is that of imaginary numbers: i It is the same as a result of minus 1. It seems to be taken from the top, and it turns out that it is central to mathematics and physics, which are based on the fact that these numbers do exist. At one point, it occurred to someone to introduce them to solve polynomials in general. This is also imagination, giving a name to something that appears and then realizing that a world opens up. Sometimes you have to imagine where you want to go and invent the mathematics to get there, as happened with general relativity or quantum mechanics. I like this creativity, and I like to live in a world regulated by formulas. It gives me peace of mind, I have fun.

P. What problems would you like to see a solution?

R. Obviously, there are very famous problems like the Riemann conjecture, that of Navier-Stokes and many others of the “millennium problems" It fascinates me that they exist, although I have not taken care of them. The point is not the result, but what procedure will have to be invented to solve them. As it happened with the famous Fermat's last theorem: Andrew Wiles developed to prove it a beautiful math, very important for the scientific community. Today, after dealing with years of optimal transport, I am especially interested in free border problems, such as when ice melts in the phase transition. Great mathematicians like Xavier Ros-Oton and Joaquím Serra, in Barcelona, ​​work on my team for years. They are very rich problems, where there are many mathematics, some of which we are still developing.