Banks define this period as "challenging." The truth is that they have several factors that are punishing your business in Spain and your profitability. This Thursday was revealed by experts from the sector who participated in the 5th Financial Monitoring Panel of the Spanish Economy organized by the Spanish Institute of Financial Analysts and the Foundation of Financial Studies (IEAF-FEF) at the Madrid Stock Exchange, among the who were representatives of the Bank of Spain and BBVA. 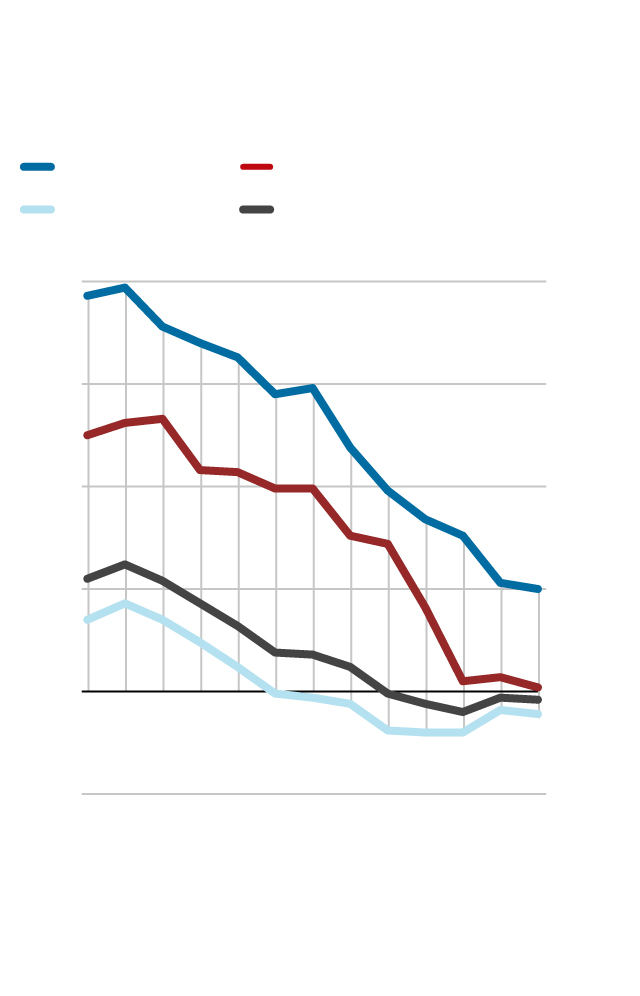 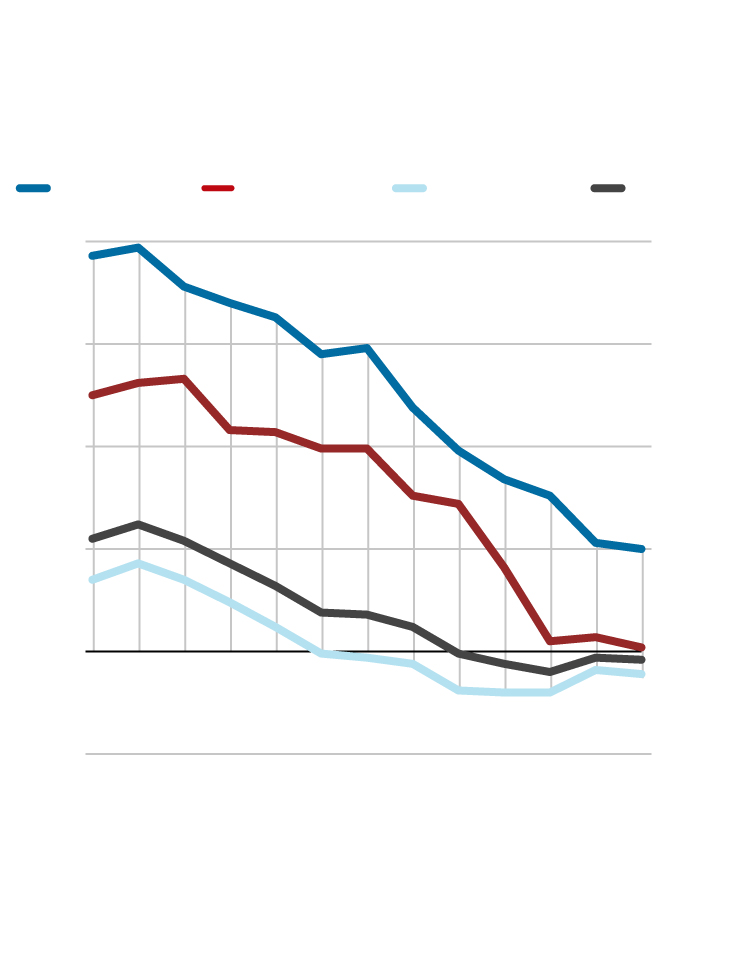 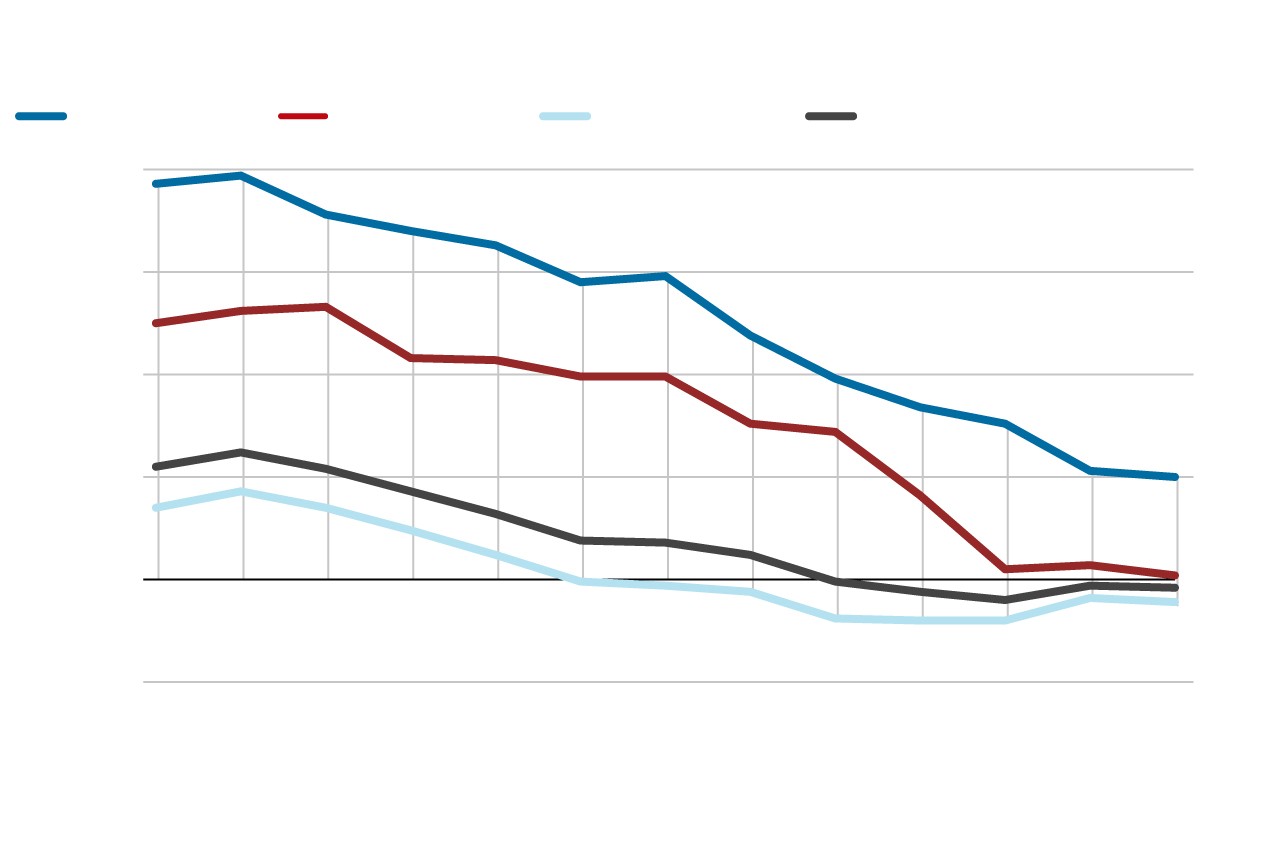 Annual rate of credit in new operations to the private sector

Among the experts, Joaquín Maudos, Deputy Director of Research of the Ivie, stressed that the official figures of the rates of increase of the crevenue in new operations to the private sector in the last 12 months "they reflect some brutal falls, such as those of mortgages, which have risen from rising 12.5% ​​in September 2018 to 0.2% a year later. In companies, in the same period, the loans have grown from 3.5% to 1.1% in September. "

According to this expert, the worrying thing is that the evolution of the new credit "is an advanced indicator of what the economic cycle can do. I find it worrying that these data anticipate a fall in business investment," said Maudos. In the case of companies, loans have been falling since May, "with much more intensity in operations of less than 250,000 euros which is typical of SMEs."

According to the Spanish Banking Association (AEB), the situation may be reversed in the coming months. In his opinion, the moderation in the evolution of the new credit "may be due to the adaptation to the new real estate credit law and the lower demand for consumer credit and SMEs, partly due to seasonality and partly due to greater economic uncertainty." The employer affirms that "the capacity and the disposition of loans of the banks has continued being wide in all the cases and with very favorable conditions".

The AEB concludes that "to the extent that all analysts expect the pace of economic growth to remain firm, although more moderate, also exceeding the specific factors mentioned above, it all leads us to believe that the new credit should also recover in the future. next".

However, from the Bank of Spain it has been pointed out that the economic slowdown is one of the great challenges of the financial sector, while considering that companies will increasingly ask banks for less credit because they will be financed in the markets. The head of the financial analysis division of the Bank of Spain, Ángel Gavilán, said Thursday that in 2008 75% of business financing depended on banks, while in 2019 the figure has fallen to 50%.

The supervisor believes that this path should be strengthened "since the economies less banked they are stronger, more resilient and less vulnerable to socks that financial institutions can live. This is one of the reasons why the rate of increase in credit to companies grows 0% in banking. "Gavilán admitted that, although this situation is hard for the sector," from the supervisor we see it well. "

For its part, Maudos analyzes the situation for each type of credit and reaches other conclusions. In the case of companies, remember that large companies can go to the market to place debt at negative rates thanks to the ECB's asset purchase program. "But in SMEs, which cannot do it, it is worrying to see negative growth rates, which has to do with lower investment growth."

What will be the trend in the coming months? For the head of Research of the Ivie, "if there is consensus that the GDP in 2020 will grow below that of 2019, it is very unlikely that this decreasing trend will be reversed. In fact, the Bank of Spain, in its Report of Financial Stability published a week ago, points out that one of the risks for the bank is the economic slowdown, and it is something that we are already seeing in the evolution of the new credit and in the fall in bank profitability in the first half of 2019.

On the other hand, during the presentation of the Panel, the representative of the Bank of Spain pointed out that operating expenses have been reduced less than income, which has deteriorated the
Entity efficiency. "The number of banks has fallen 50%, the branch network 40% and the workforce 30%, but it is not enough because the debt of households and companies has fallen 70% with the sector."

Gavilán said that in this scenario, there is still "ample room for improvement" and that it would be "fundamental" to intensify the rationalization of operating costs through efficiency improvements. "This process may require, in some cases, additional progress
in the consolidation process, "he said in reference to new mergers, who insisted that the banking sector should seek greater profitability and alternative sources of income.

Ángel Bergés, vice president of AFI, said he was going to defend the bank, "even though that means going against the flow because everyone gets into it." He pointed out that the transformation of the Spanish economy in recent decades has been accompanied by a modernization and growing financial offer by banks. He stressed that the total assets of the banking system represented 101% of GDP in 1995, "reaching 300% in the previous years of the crisis; after the adjustment and sanitation carried out, it has dropped to 230% of GDP."

Bergés explained that entities must adapt to a regulatory scenario that "has significantly multiplied the requirements in all areas of the business", as well as a competitive environment characterized by "a clear excess of capacity and ease of entry of new competitors, with asymmetries clear in terms of regulatory requirements, and even in relation to climate change. "

Finally, Álvaro Martín, head of BBVA Data Strategy, said that there are now 371 companies fintech that operate in the niche of banks' businesses. "Some collaborate and others compete. Besides, there are the big ones, the bigtech"Regarding the greater collaboration with these technologies, as Gavilán requested, Martín recalled that it is not so easy because of the respect for the confidentiality of customer data, as required by banks.