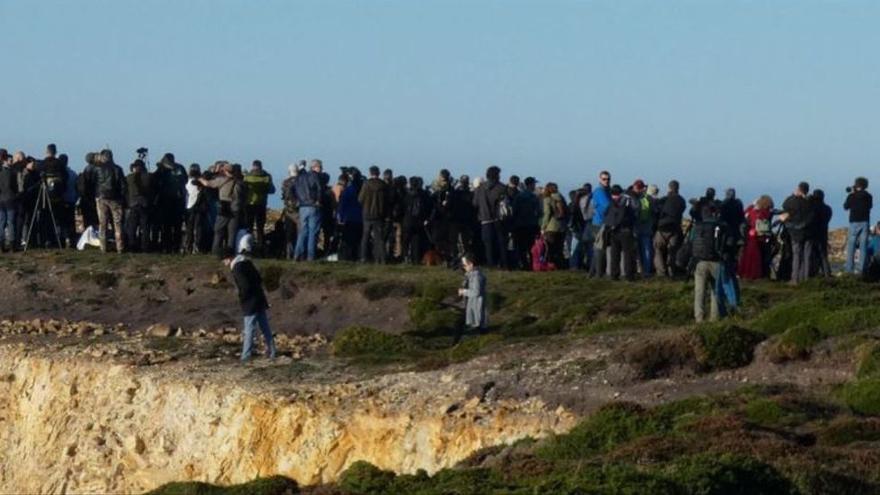 The historical sighting of two snowy owls in Gozón (Asturias) has unleashed the madness at Cabo Peñas. The local ornithologist Juan Carlos Vázquez, president of Mavea, warns, however, that the crowds of hundreds of onlookers and fans from all over Spain can cause damage in the area: “It is a protected space. We must take care of it”.

The president of the Mavea Ornithology Group calls for “that visitors maintain order and do not go off the beaten track.” The presence of the snowy owl for the first time in Spain – popularized by its presence in the ‘Harry Potter’ films – is an unprecedented fact for which hundreds of fans, even from outside the country, have traveled to the Principality. “I have come to count 204 people crammed 30 meters from the owl and even people walking through the bushes in the area ”, exclaims the expert Juan Carlos Vázquez about the scene this Saturday.

It should be noted that the Cabo Peñas area was the first protected area in Asturias, in 1995. Since then, “clearly nothing has been done to it”, Acknowledged last week the mayor of Gozón, Jorge Suárez, also assuring that from the Gozon City council they aspire to order and protect the protected landscape with European funds.

A detail of the animal.

The first of the three snowy owls sighted in Spain was located a couple of weeks ago in La Virgen del Mar (Cantabria). The dehydration and malnutrition of the animal caused its death the day after it was captured in an attempt to cure it. Now, according to the ornithologist Juan Carlos Vázquez, “An isotope analysis will be carried out on the feathers and its origin could be known from the diet”. The other two birds – a female and a male – headed towards Asturias. The female was seen for the first time on the beach of Moniello (Gozón) and is now found in the area of ​​Cabo Peñas. For its part, the male first circled the area of ​​the cape and then Verdicio. Now this specimen was seen for the last time at El Musel, in Gijón.

The current hypothesis that experts are considering is that the three specimens of the snowy owl come from Canada and that they have ended up on the peninsula aboard an ocean liner due to a storm in some migratory process. “The normal thing, as has already happened with other rare birds in Asturias, is that as winter progresses they head north”, develops Juan Carlos Vázquez. The day yesterday, Sunday, was not the most appropriate to spot the female that haunts Cape Peñas. The rain caused only a few fans to flock to the area with some hope. “For me, who am a great fan of birds and animals, it’s a dream to be able to see a niva owll”, Recognized the Asturian César Gil with umbrella in hand.

Next to him was a group of half a dozen ornithologists. “I saw the news last week and I didn’t think twice about coming to Asturias this weekend,” said young Roberto Mayo, from Madrid. “I could already see it, but it is a bit disappointing with so much rain,” the Madrid native explained sadly.