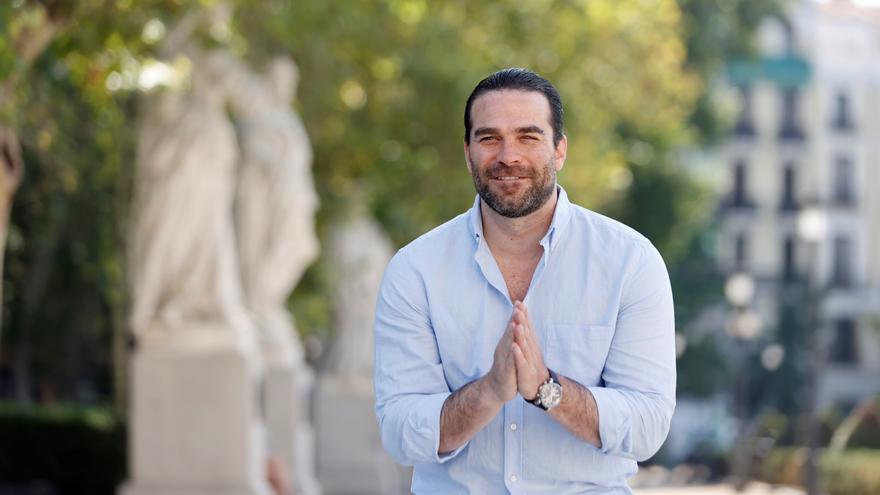 If one stops to look at the social networks of Alejandro Nones (Caracas, 1982) you can see a novel hunk with Caribbean Sea eyes and a hectic life of travels and interviews around the world. But as Nones himself shows when explaining his ‘modus vivendi’, staying on the surface would be absurd.

Lifelong actor, trained in Cuba, his greatest success has come from the hand of Netflix thanks to the intrigue series, ‘Who Killed Sara’, of which a third season has already been announced, which will begin shooting in October of this year. And although at the end of the second installment some details of the death of the protagonist are glimpsed, Nones, who gets into the skin of the love of the dead girl, Rodolfo Lazcano, has treasured a secret for almost two years, or more good, keeps the current secret par excellence. “Everyone asks me on the street, my family, my friends … but I have never told anyone who killed Sara“, says the interpreter between laughs to add that” it is necessary to see the series! “.

Although it is not the only secret that he keeps. Nones, now working on another production, ‘Malverde: the patron saint’, and with another project starting in December, is defined as a “dreamer, fighter and happy” person.. But it does not stop there, the actor is clear that the way in which things are faced is key when it comes to getting what one wants, what one dreams of. “A person succeeds when he is determined. Consistency, discipline, dedication … to be searching, generating, trying to be a better actor is essential. The rest is not important. That if the photo, the interview, the followers, that if you were lucky or not … everything is secondary. The only important thing is to be the best actor that one can be “, convicted sentence. And for now it has led to a successful conclusion.

“Fame is fine, I appreciate it, but I have always struggled to be clear about my why”

‘Who Killed Sara’ premiered on March 24 of this same year and just two days later Netflix confirmed that there would be a second season. Nones saw how the project he had been working on premiered in more than 190 countries and how his career, with more than a dozen series to his credit and a few films and two dives in the tables, ran to stardom with the consequent fame, his followers on social networks and his travels through those hundreds of countries. “How do I carry it? Something for which I have always fought, with myself, is to be clear about my why. Why do I want to tell stories, why I wanted to be an actor and I always reaffirm myself in that. It’s the only thing that has to be important, everything else is a consequence “, he says clearly. stories … always with humility and gratitude and with the clarity that what I have to do is continue to grow as an actor and continue with my search“, Add.

The Venezuelan, with his feet on the ground despite the tremendous fame which ensures that in the beginning “I did not understand, it seemed crazy to me because I had not experienced it“He believes that one of the mysteries of life is to think that it has to be in a specific way.”We spend our lives fighting for an idea when simply what matters is now, the reality that one lives in the present. We always think that what happened was better and that what is coming could be, but we are never right where we have to be, which is in the present, “he says.

And in the present, in your now of the pandemic, The Venezuelan has been able to see how his career reached its maximum and he did not miss work at any time. “For everyone it has been difficult, especially at the beginning, with the uncertainty. When I was confined I had moments of anguish, of having a little pressure regarding the future, but at the same time I was doing the series before the pandemic started, so I knew I would have to finish the first season. Netflix He told us that the second was going to be done, so at a time when no one was generating new productions, I was working, “he has a spark of emotion.” Afterwards, I have continued to come up with projects and this generates a lot of gratitude. These are difficult times and being able to have a job and have positive things happen in my career, I feel in a very special and beautiful moment“he adds.

“Love can have suffering, but either you hold on to it or you turn it around and try to feel good about love from another place”

In his role as Rodolfo, a grieving lover desperate for the truth about Sara, Nones has conquered the world, although he does not believe that love, as in the case of his character, has to include suffering. “Everything has the energy that one wants it to have. Love can have suffering, but either you cling to it or you turn it around and seek to feel good about love from another place. ”

Thus, this self-declared dreamer has been climbing step by step until reaching the sweetest and most rewarding moment of his career. “Being a dreamer is dangerous if you stay in the dream, but if you develop dreams together with action, discipline, perseverance and clarity where you are going, it is a positive thing. ”

A fan of Spanish cinema, with whom he says he grew up, he does not rule out any project and does not get wet when choosing a national director. But according to himself he has declared in the media, he has so many offers that it is difficult for him to choose. Quite an achievement in less than a year since the Netflix production was released after a consolidated career in Latin America.

And if you ask him about his land, Venezuela, or by Cuba, where he trained as an actor, continues to have his feet on the ground as with everything, and does not hesitate to get wet. “I am always very aware of what happens. It hurts me that suddenly the people of my country are not well and there are such delicate moments and the only thing that is important to me is that they have a positive future. I live it very present and trying contribute my grain of sand from my trench“, he comments.

Without a doubt, Nones keeps secrets, talents, fame and humility. Much humility.

What would you say to Alexander from ten years ago?

I would say the same as today (laughs). Let him relax a bit, everything will be fine. I am very committed to my career, I care a lot, I put all my energy, all my desire …