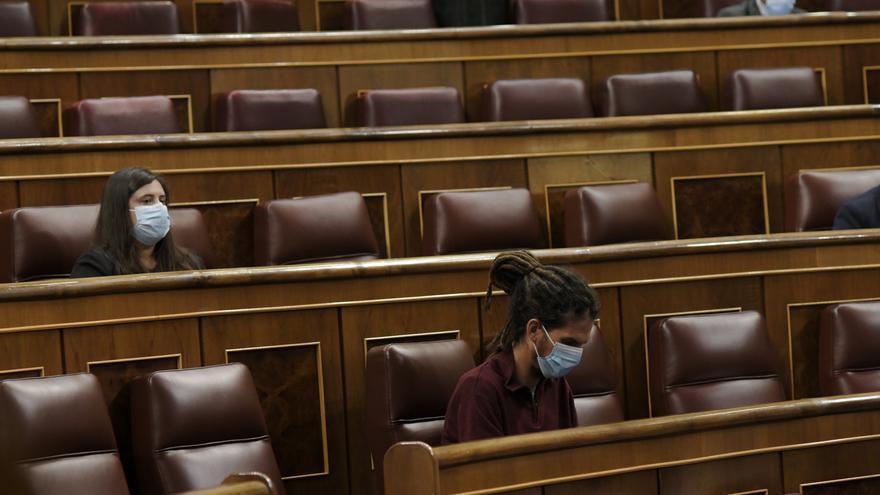 The former member of the United We Can Alberto Rodríguez, whom Congress he withdrew his seat on October 22 in the wake of his conviction for beating a policeman in 2014, maintains his struggle with Justice to try to regain his status as a parliamentarian. The fight to return to Congress is centered on the presentation of appeals before the courts outside of the confederal formation that Rodríguez left after his controversial departure from the Lower House, and it has been strengthened more than a month after the Supreme Court ruling was known, which sentenced him to 45 days in prison, replaced by a fine of 540 euros, and the prohibition to exercise passive suffrage.

On Wednesday, the former parliamentarian filed an annulment incident with the Supreme Court trying to get the High Court to annul his sentence, which has not yet received a response. Rodríguez’s lawyers understand, among other things, that his conviction has violated his right to political representation and that his right to assembly and demonstration has also been affected.

The nullity incident is a movement designed for those occasions in which the convicted person considers that a sentence has violated their fundamental rights in some aspect that has not been able to be denounced before a final judgment is handed down on the case. The sentence against which it is interposed, as in this case, must not be appealable by ordinary means. And the annulment incident is also considered a prerequisite to be able to file an appeal before the Constitutional Court, the way that the former parliamentarian’s lawyers intend to resort to.

These lawyers consider that Rodríguez’s fundamental right has been violated “to the presumption of innocence, to an impartial judge, to effective judicial protection, to a process with due guarantees, to freedom of assembly and demonstration, and political representation. , to the principle of legality and the principle of proportionality as a guiding principle that must inform criminal law “.

The brief presented by Rodríguez this week charges, in the first place, against the agent’s testimony attacked, the only evidence that led to the conviction. “The agent’s statement was not only sparing, but it also incurred obvious contradictions,” he says in the text registered with the Supreme Court. In addition, his defense understands that in this case “a case of ‘unique testimony’ has been artificially constructed, inasmuch as there were a multitude of people, numerous recorded images and among the people who were there, without a doubt, were all the components of the police device “. The former deputy also questions the impartiality of the magistrates who handed down the sentence and denounces that their political rights have been violated twice: for having been left without a seat and for the disqualification of the right to passive suffrage.

Rodríguez’s lawyers also charged again against the performance of the President of Congress, Meritxell Batet, which was the one that finally decided his suspension as a deputy on October 22. The interpretation of that sentence last month caused an unprecedented clash between the Supreme Court and the Presidency of Congress. In fact, jurists of all sensitivities had questioned not only the sentence, which had several individual votes and was based mainly on the agent’s testimony; but also the consequences of this. A month later, they still cannot agree on the scope of his disqualification and several legal experts argue that it would have been enough to remove the parliamentarian for a month and a half.

In fact, the lawyers of Congress themselves initially claimed in a report dated October 18 that Rodríguez could maintain the seat, considering that the deprivation of the right to passive suffrage dictated by the High Court in the judgment does not affect the status of deputy, which was acquired previously. Two days later, however, the Supreme issued an ambiguous report urging suspension. In between, Rodríguez’s case became a thrown weapon in the political battle that took place in two tense meetings of the Mesa, the Chamber’s governing body. While the right-wing minority of PP and Vox defended that the former leader of Podemos should be suspended, the majority of PSOE and United Podemos claimed his permanence based on that letter from the lawyers.

It was at the second meeting of the highest body of the Lower House to address the case, on October 21, in which the president of the Congress was more favorable to withdraw the minutes as a result of pressure from both the Supreme Court and the rights. But before the doubts expressed by the lawyers, Batet promoted a vote in which the majority of PSOE and United We Can agreed to request more explanations from the Supreme Court. On Friday the 22nd, and after having received another letter from the High Court reminding him that Rodríguez had been convicted to jail time and disqualification from passive suffrage and, after consulting with the secretary general of Congress and senior counsel, Batet decided to withdraw the seat.

That same night, Unidos Podemos sent a brief statement to the press announcing that they would file a complaint for trespass against Batet. That announcement of the complaint caused an internal schism in the confederal formation since both the second vice president and Minister of Labor, Yolanda Díaz, as well as the Minister of Consumption, Alberto Garzón, and even Rodríguez himself were unaware of the decision, who the next day decided to unsubscribe from Podemos and start your own court battle to regain the seat.

The Senior counsel in Congress endorsed Batet’s decision in writing to suspend the former deputy from the confederal formation, but criticism of all – except the PSOE – against the president of the Lower House they multiplied and Podemos came to formally request his resignation. The president’s environment explained that in everything related to Rodríguez’s conviction, she has maintained an “institutional position” following “the procedure quickly” and always listening to the Chamber’s legal services, as well as that Rodríguez’s case is a “strictly technical legal” issue and “not a problem of a political nature”.

The former parliamentarian also decided to address his defense from the legal level by leaving Podemos and hiring Isabel Elbal and Gonzalo Boye as lawyers. In addition to the nullity incident registered this week, the lawyers they presented another writing before the Supreme just a few days after his client’s seat was removed requesting the temporary suspension of the sentence, without having received any response from the High Court for the time being.

Last day 5 the defense of Rodríguez He also addressed the Central Electoral Board to ask you for explanations about when you will have served your sentence of month and a half of disqualification. The defense of the ex-parliamentarian asked the body to issue “certification on the dates of execution of the sentence as calculated by this Central Electoral Board” on his 45-day disqualification sentence to exercise passive suffrage, without having received a response from the body that acts as arbitrator of electoral processes.