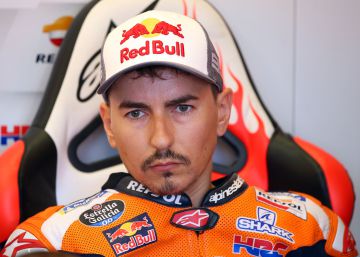 Jorge Lorenzo's return to the races is being complicated, almost as thorny as the season that the Balearic has been in Honda. Lorenzo crashed at the end of June in Assen and missed four races due to a vertebrae injury. He arrives at Misano's appointment this weekend still in pain but with the aim of improving Silverstone's discreet performance, where he finished fourteen, almost a minute from the winner, Alex Rins.

Alberto Puig, sports director of the HRC team, has given a warning touch to the pilot: "What needs to be clarified is how Lorenzo is, if he feels motivated and can recover his form again." Honda insists on how important it is to be patient with the Balearic Islands and has tried to clothe him even when Lorenzo, with a contract until the end of 2020, flirted with going to Ducati. But Alberto Puig is little given to diplomacy and has tried to stir up the recovery of the three-time MotoGP world champion. "For Jorge it is a start again, but whenever he wants, he has the desire and motivation," said the manager. In the same way, he reminded the Balearic that riding a MotoGP is a high voltage exercise. "It's like jumping into the ring," he illustrates, and highlights that driving at more than 300 kilometers per hour involves a number of risks: "Getting hurt is part of the game."

Lorenzo, who once showed a heroic ability to recover from terrible falls, has denied suffering from a lack of desire or motivation and blames his poor results with the Honda to the black streak of falls that drags. "The injuries I have suffered are 60% or 70% of the fault of this situation," said Misano. He assures that the rest of the responsibility quota for his gray season is attributable to his "lack of trust" with the Honda. Lorenzo denies being bothered by the manifestations of Puig but has not been left without replying, saying to the press that, in 17 years of professional, "I have run many times injured and pushed."

The Honda-Repsol team swings between Lorenzo's ailments and the good tuning in Marc Márquez's box. The World Cup leader arrives in Misano with a 78-point lead over Andrea Dovizioso and, although he refuses to account for when he could champion, he admits: "It's a World Cup that I can only lose." Dovizioso seems to be clear: "78 points are many, and even worse if you have to recover Marquez."

The leader of the World Cup also points out that the main threat is not Dovizioso, his persecutor in the World Cup, but he sees the Frenchman Fabio Quartararo finer. The Yamaha Petronas fell in Silverstone but, a few days later, it was the fastest in the tests played at the Misano circuit. This weekend he will try to reaffirm in the race the good impressions he left in rehearsals. The French rookie even impresses a legend like Valentino Rossi, who has stated: "Quartararo does incredible things."

Barça plays in Logroño with an eye on the cup