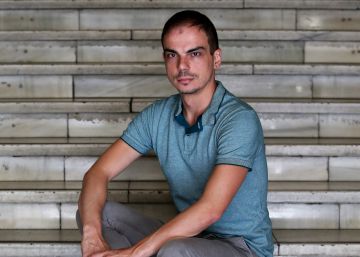 The playwright's happiness Alberto Conejero (Vilches, Jaén, 1978) This Monday is complete. Not only has he been awarded the National Dramatic Literature Award, but he has won it for his piece Wheat geometry, his most personal project, to the point that he not only wrote the text but also co-produced and signed his staging, which meant his debut as a theater director. "This work links with my roots and from the first moment I committed myself radically with her. I felt that I should accompany this story until the end and that's why I started to direct it," the author explains excitedly by phone.

Wheat geometry It stars a marriage that goes by car from Barcelona to a small town in the south to attend the funeral of the father of man, who has known nothing in his life. During the trip they will not only cross the country, but also revive their family past, intertwined with Spanish history, and bring to the surface their own couple crisis. The jury has chosen this work “for his poetic style, his mastery in the accurate construction of the characters and the precise configuration and development of the plot, in which stories that reflect the Spanish reality through three generations converge"

Conejero began to write this work two years ago, starting from a memory of his mother's youth and then he started his staging. "In fact, I was finishing it in the rehearsals, with the help of the actors. They finished profiling it, so they are part of this award," he acknowledges. It was published by Dos Mustaches in May 2018 and premiered last February at the Valle-Inclán theater in Madrid in co-production with the National Dramatic Center. The production keeps this season on tour in Spain.

With this award the playwright culminates a period of intense and successful activity that began with the presentation of Dark stone at the National Dramatic Center in 2015, drama about the last days of Rafael Rodríguez Rapún, Lorca's last boyfriend, for which won the Max Award for best author in 2016. In 2017 two of them were released: Usuhaia, starring José Coronado, and Snow days, written from the memoirs of Josefina Manresa, widow of Miguel Hernández, played by actress Rosario Pardo. In November of last year he reached the stage Every night of a day, directed by Luis Luque, with Carmelo Gómez and Ana Torrent, who is still on tour. And two months later Lluís Pasqual premiered The dream of life, the piece with which Conejero imagines the end of the unfinished Comedy without title from Lorca.

Quarantine with the Beatles in Brazil, by Fernando Trueba | Babelia

One by one against the virus