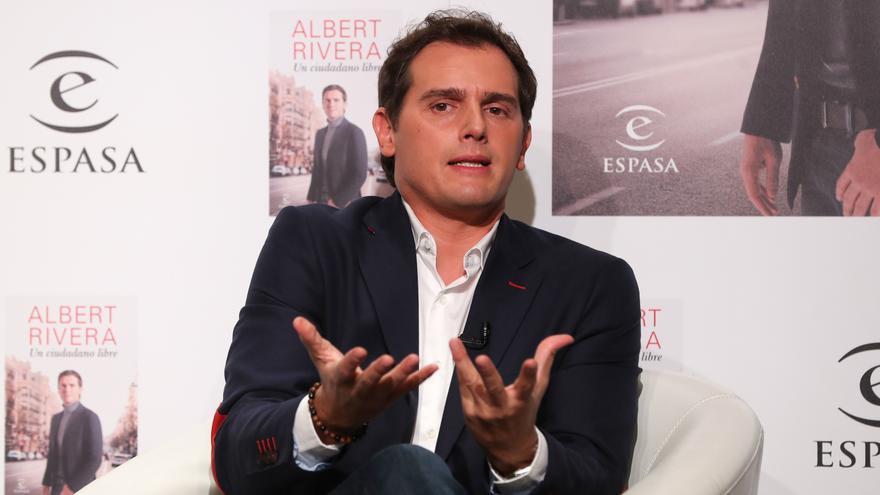 When politicians wonder what the legacy of their trajectory will be, the smartest thing to do is not wait for others to describe it. Better get down to business. “For my part, I think that it is best for all authors to let history deal with the past, especially since I intend to write that story myself,” said Winston Churchill in a parliamentary debate in January 1948. The deputies met They laughed, but they knew it wasn’t a joke. He had already written several history books, and in a few months he would be releasing the first volume of his WWII history. The work was a great sales success, which did not prevent it from being criticized for a few omissions interested in the facts described. Churchill had already explained that he had written what he had experienced. “This is not history. It is my experience.”

That is what Albert Rivera has tried to do. His problem is that the facts that he tells in his book ‘A Free Citizen’, published by Espasa, are relatively recent and include a lot of his public statements in which he said what he said and was reflected in the media. Publishing a book requires promoting it in those same media and we have already witnessed his first attempt to touch up the events that precipitated his electoral failure at the polls in November 2019 and his abandonment of politics.

Rivera was on Tuesday night in the program ‘El hormiguero’, presented by Pablo Motos on Antena 3, where he is practically a friend of the house. Even so, Motos asked him “what is the identity of Ciudadanos”, in relation to the changes in strategy and opinion that the party had last year, and the question remained in the air, because he did not answer it.

It is not often that a politician admits that the adversary is smarter than he is. People don’t like to vote fools. Two years ago, Rivera was to eat the world and in the end it ended up in the container of recycled politicians for other functions. But once they are out of the jungle they can allow themselves certain freedoms. Surprisingly, the former president of Ciudadanos opted in the program to give pity, so much that Motos could have given him a slap and it would have seemed logical. “I sinned a little bit. Spain was polarized, Sánchez fed Vox and vice versa, and it occurred to me to raise the white flag in the middle of a war,” he said to explain his last-minute offer to the PSOE to negotiate with conditions that they made the pact impossible.

White flag? The usual symbol of surrender in a war? Let’s say I was thinking about the gesture of interrupting the fighting to parley. If it is true that this was a war, it must be remembered that Rivera also fired a few shots from his trench. There were few blue helmets in those skirmishes.

The trick was to present himself as the victim of a perfidious villain so that it would appear to the audience that he must have been even tougher against the left. “Sánchez, as a strategist, has been very good,” he said. Wow, he didn’t say that when he was in Congress. However, it soon became clear that he had been defeated by an intelligence tinged with darkness. “I should have unmasked him earlier,” she said afterward. Batman vs. Joker. Or Batman versus another dangerous cloaked criminal. As he also commented that “this country has Pedro Sánchez as president, because it wants Pedro Sánchez as president,” we must come to the conclusion that Spanish voters are easily fooled.

Why didn’t you agree with Sánchez after the April elections? Motos asked him (the PSOE and Ciudadanos had 180 seats at that time). “For a very simple thing. Because Sánchez didn’t want to. He wanted to agree with Podemos and the nationalists. He told me,” he replied.

The newspaper library begins to ask for passage if you want to fit those words into reality. A few days after those elections, Rivera left a meeting with the current president with an unambiguous message. He was not interested in any agreement with Sánchez in exchange for the yes or the abstention in the investiture. He only tolerated one subject on which he was willing to negotiate: “I have offered him to call me at the minute if he is going to apply the 155” in Catalunya. If Sánchez had told him that he had already planned to agree with Podemos, which did not happen until after the November elections, it must be assumed that Rivera would have announced it and thus would have gotten rid of all the pressure he was receiving from companies and the media. of communication with the aim of preventing the entry of Pablo Iglesias’ party into the Government.

How would he be interested in making a pact with the PSOE if he had stayed eight seats from the PP in April, if among the attacks he had directed at Sánchez was to maintain that the president was “a public danger” who was at the head of “a gang “What if Ciudadanos had announced that it was preparing to lead the opposition against the Government? Rivera had already made an immovable decision before those gathered in front of the PSOE headquarters on election night shouted “With Rivera, no” and Sánchez put on a face of circumstances.

Admittedly, Churchill would have found it more difficult to sell his wartime decisions in the age of the internet and social media. Rivera is going to need to write more than one book for people to forget what he said in 2019.