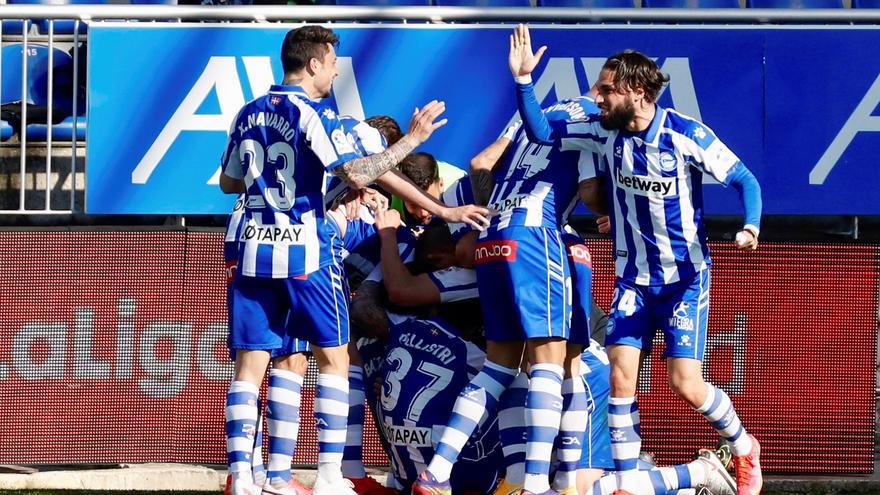 The Deportivo Alavés won the victory over Sports Society Huesca in a game that had a lot of pace but few occasions and in which the Albiazul team won again in league after more than two months without doing it thanks to a goal from the edge of the Argentine area Rodrigo Battaglia in the final moments of the crash.

The babazorro team thus leaves the relegation places in sixteenth position, waiting for what Valladolid does, while the Huesca breaks the streak of two consecutive victories they had achieved and remains seventeenth.

Both teams had their chances, although the clearest were for the Vitorians, who saw how Joselu crashed a ball into the crossbar and the referee canceled a goal by Lucas Pérez for offside. Huesca also had a header that hit the crossbar in the final minutes, in a match that stood out for its pace and intensity.

The meeting started with a Deportivo Alavés well planted in the field, trying to carry out an associative game to gradually reach the rival area. The Huesca defense, very attentive at all times, shortened Alavés' approaches every time the ball approached the small area, and the danger did not quite arrive.

Slowly the visitors were shedding the local domain, and they began to play more with the ball to try their luck in attack. Thus, in the 25th minute came the clearest chance of the second half: a good long shot from Vavro that Pacheco was forced to clear for a corner.

After this play, the game opened much more in the next fifteen minutes, with two teams that sought to inject rhythm into the game but did not end up creating a real danger. In the 35th minute, the Huesca team requested a penalty by Tachi's hand in their own area, but neither Hernández Hernández nor Mateu Lahoz in the VAR considered decreeing the maximum penalty.

At the end of the first half, Alavés tried a couple more approaches, but at halftime the scoreboard reflected equality and the good defensive work shown on the field: 0-0.

The Second part began with a change in the babazorro set: Martín Aguirregabiria entered the green to replace Rubén Duarte, who left with pain in his right ankle.

A few minutes later, in minute 47, Alavés was about to get ahead on the scoreboard: Joselu finished off the crosshead a corner in what would be the clearest occasion of the clash so far.

Huesca tried to respond based on internships and centers to the area, but the babazorros centrals were very sure reducing all the balls that were directed to the rival forwards. The clash then entered a phase of many inaccuracies, in which neither team managed to spin plays and in which the ball changed hands very easily.

No more chances came until after the 74th minute. Pellistri, who had entered the field shortly before, broke lines and served a low ball to Jota Peleteiro, who was shooting from outside the area. The shot was stopped by Andrés Fernández, but the loose rejection was converted by Lucas Pérez, although the play did not go up to the scoreboard due to the Galician's offside.

On the next play, Battaglia could see the second yellow for stopping a ball in his own field with his arm, although the referee decided not to show him the card.

It was his own Battaglia, in fact, who in the final moments of the match, in 85, scored the first for Deportivo Alavés. Jota Peleteiro hung the ball into the area after a foul by Huesca for Laguardia to prolong it with a header. The visiting defense lacked forcefulness and the Argentine hit the ball from the vertex of the area to send the ball to the meshes and overtake his team.

Huesca responded a few minutes later with a lateral center that he wrote to finish off from point-blank range, but the ball hit the crossbar.

In the discount, the visiting team tried to squeeze Alavés, but the locals managed to maintain the advantage achieved to take the victory.

Incidents: Match corresponding to the thirty-third day of La Liga Santander, played without an audience at the Mendizorroza stadium in Vitoria.

UD cannot against Racing with ten