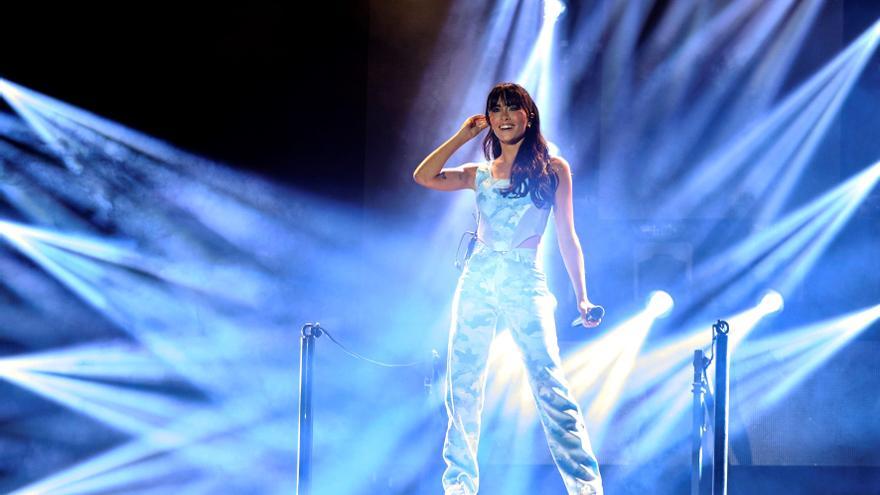 Palafrugell (Girona), Aug 8 (EFE) .- Four years after rising to fame in Operación Triunfo 2017, the singer Aitana has conquered the public of the Cap Roig festival tonight with a concert in which she has reviewed songs from her three works, including his greatest hits “Telephone”, “Photo of the DNI” or “You are going to stay”.

“I am very excited to be here”, he thanked as soon as he played the first two songs of the night: “11 reasons” and “When you left”, from his latest album “11 reasons”.

“About 5 or 6 years ago I came here to my first concert, to see James Arthur. And my father told Maite: shortly he will be on this stage ”, he recalled. “Dreams come true because at the age of five I am offering my second concert at Cap Roig,” he added, recalling his first visit to the festival organized by Clipper’s Live and promoted by CaixaBank.

Throughout the almost two hours that the concert lasted, the singer has not stopped interacting and talking with the attendees, most of them very young and who knew all the songs from top to bottom. “You are a very spectacular audience, in the end the concerts are marked by you, not us, and I thank you very much,” the Barcelona woman confessed.

Born in Sant Climent de Llobregat (1999), Aitana Ocaña Morales rose to fame after her time on the television program Operación Triunfo, in which she was ranked second, after Amaia Romero.

The song “Lo malo”, which she performed with Ana Guerra, swept through platforms such as Spotify and YouTube, and in 2018 she released her first compilation album of her songs from the show, titled “Aitana Ocaña”.

In 2019 she published her first studio album, “Spoler”, with 14 songs, most of them composed by her. A side of the singer who further strengthened in her next work, “11 reasons” (2020), with eleven songs signed by her and in which she collaborates with different artists, such as the German musician Pole, the Spanish Beret, the Colombian Sebástián Yatra and even with Alejando Sanz, who is the co-author of “Corazón sin vida”, a nod to Sanz’s famous song “Corazón partío”.

One of the most emotional moments of the concert in Cap Roig has come with the song “Ni una más”, in which he condemns sexist violence and inequalities.

The public has chanted it with the light of the mobile phones on and moving them from side to side, to the rhythm of the song. A scene similar to the one that the singer and those in attendance later offered with the theme “With honey on the lips”, which was highly celebrated among those present.

“Better than you”, “Hold”, “You have not left and I already miss you” or “Photo of the DNI” have made everyone present move, although always from the seat and only moving their arms to comply with the anticovid measures.

Before the end of the concert, Aitana also wanted to pay tribute to all the people who have lost their lives in this last year due to the pandemic, including her grandfather Emiliano. “I would like to dedicate this song to my grandfather Emiliano and to all the grandparents who unfortunately have left and are no longer here,” he said before singing “If you want it.”

“You’re going to stay” and “+ (More)” have been chosen to put an end to the second concert by Aitana Ocaña at the Calella de Palafrugell festival, which has once again left an indelible memory for the attendees, who, when the artist made a move to finish, they did not stop shouting “Another, another!”, hitting the ground with their feet.

The Cap Roig Festival continues this week with concerts by David Bisbal, Morat, Silvia Pérez Cruz and Hombres G, all sold out.