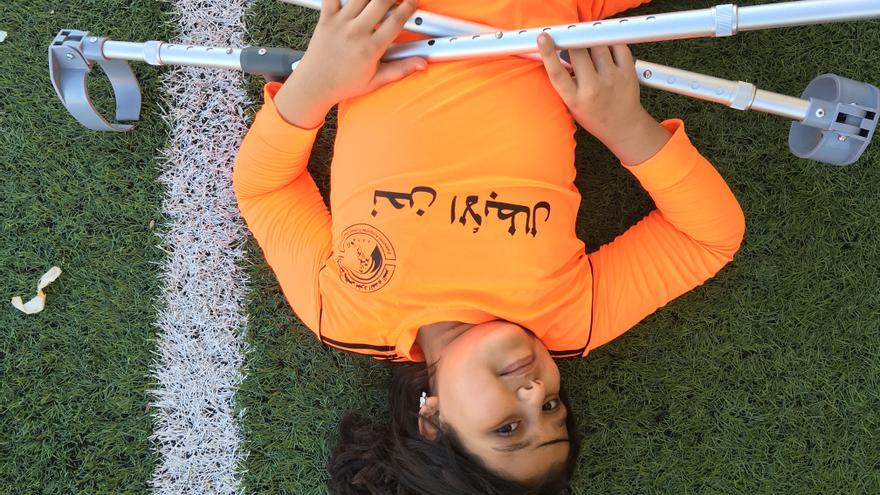 With one leg and two crutches, Ahed Hamdan plays soccer with 25 other amputee girls and boys. Ahed walks happily towards the goal and kicks the ball to score. Running celebrates the goal with the rest of the team on the huge green playground.

Ahed, who is 10 years old and lives in the Bureij refugee campIn the middle of the Gaza Strip, he dreams of being a physical therapist as an adult. Her personality and broad smile effortlessly attracts the attention of the people around her: "I love playing soccer, swimming, and massaging people."

Decades of conflict have left deep scars, physical and psychological, on the population, and especially on children. Children under 11 have already lived through 3 brutal armed conflicts: the operation Molten lead in 2008, the operation Defensive Pillar in 2012 and Protective Margin operation in 2014. As a consequence, thousands of people live without any of their members in the Gaza Strip. They and their families rarely find centers where specialized and adapted activities are carried out.

Ahed studies at the Bureij school in the United Nations Agency for Palestine Refugees, UNRWA, where he is treated the same as the rest of his colleagues. Her teachers and friends respect her because, regardless of her disability, she is a smart, hardworking young woman who always gets the highest grades in her classes.

Together with the school, sport has also been a fundamental support. In 2018, the International Committee of the Red Cross and the Palestinian Amputee Soccer Association (PAFA) launched a soccer training program for minor amputees. Ahed and 25 other children in these circumstances found a place to train like the rest of their age. The program invests efforts in young amputees with the aim of forming a team that will represent Palestine in future Paralympic Games.

Accompanied by her mother, Lina, and her younger brother, Omar, Ahed finds the courage in her family, school, and the community around her to continue her training. “Mom, dad and the teachers motivate me to come and play soccer. Thanks to them, I never felt the disability. "Recently, Ahed and her mother, Lina, returned from a trip to the United States where a prosthesis changed their lives: "The first thing I do in the morning is to put on my artificial leg. Now I can run after Omar when he takes my paintings without asking permission," Ahed comments cheerfully.

The little girl was born with one leg and her mother attributes the cause to inhaling a large amount of phosphorous gas while she was pregnant with her during the "First Gaza War", as the inhabitants of the enclave call it. The offensive that is formally known as Operation Cast Lead the the lives of more than 1,400 Palestinian men and women, most of them civilians and 4 Israelis. The Israeli air force used internationally banned weapons such as white phosphorous bombs in a military offensive from air, land and sea that began in late 2008. One of these dangerous bombs fell on a UNRWA school in the Jabalia refugee camp, where more than 600 people were sheltering. The UNRWA humanitarian aid warehouse was also attacked.

Amputee boys and girls are part of the 16,000 people who live without any of their members in the Gaza Strip. Many of them were born that way, but some suffered accidents or air attacks that led to the loss of their legs or hands. Currently, the number of amputees in Gaza due to violence continues to grow. 170 Palestinian people have been amputated in the last two years for the shots received during the demonstrations known as the Great March of Return; and between 1,200 and 1,700 were gunshot wounds.