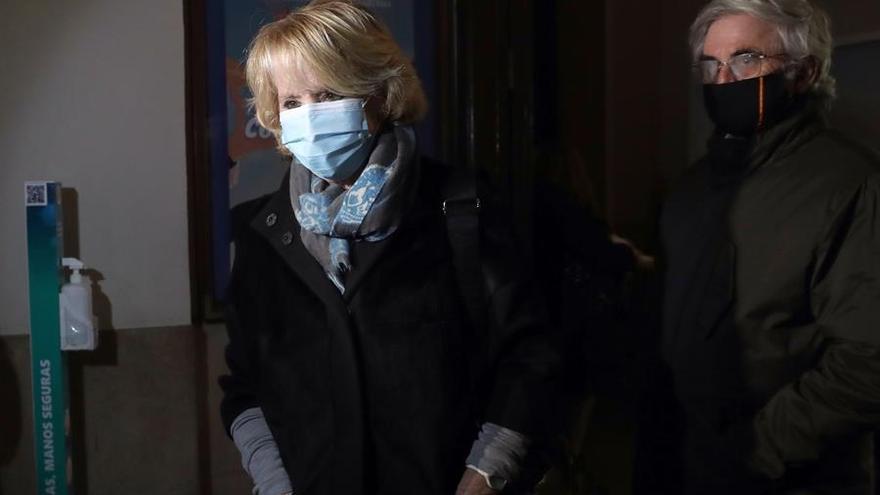 Family conflict for the unpublished Goya sold by Esperanza Aguirre’s husband to Juan Miguel Villar Mir It also affects the millionaire public aid received by Savial SL, an agricultural company whose sole administrator is the spouse of the former president of Madrid, the aristocrat Fernando Ramírez de Haro.

The brother of this, the diplomat Íñigo Ramírez de Haro, assures in the extension of the complaint that he presented on April 6 before the court of instruction 26 of Madrid that Aguirre and her husband “have diverted the fruits and subsidies for the benefit of Savial SL “of” hundreds “of hectares that the family shares, after the distribution of various estates as part of the inheritance of Aguirre’s in-laws in a pro-undivided regime (without dividing the assets).

Among the aid allegedly diverted would be “the millionaire subsidies from the Common Agricultural Policy (CAP) of the European Union, being so that the CAP subsidizes the owners of agricultural land and Savial SL is not.” This company, according to the complaint, belonged when it was created in 1993 to Fernando Ramírez de Haro in a 90% and in a 10% to Esperanza Aguirre, scourge during his stage in politics of “the subsidies, the subsidies and the mamandurrias in general” .

The complaint attributes to the marriage “the decapitalization of all the assets of the hereditary community” since Aguirre’s father-in-law, Ignacio Ramírez de Haro, Count of Bornos, died in 2010. The former Madrid president and her husband, the letter says, “have not given Mr. Íñigo any benefit from said farms, they have refused to render accounts of his administration, they have decapitalized them” and have committed “intensive excesses” in the Savial’s administration, leaving it “without any liquidity” and in technical bankruptcy.

The subsidies collected by that company in the last ten years would well exceed 2 million euros. Between 2006 and 2013, Savial SL received 1,626,443 euros in aid from the PAC, according to InfoLibre years ago. And it has continued to do so afterwards. In the portal of the Spanish Agrarian Guarantee Fund, it appears as a beneficiary of 202,902.9 euros of these aid only in 2019 (last year available).

Aguirre’s brother-in-law’s lawsuit accuses the former president, among other crimes, of misappropriation, unfair administration, property lifting, money laundering, fraudulent bankruptcy and a fraud against the general budgets of the EU through the collection of these aid. Regarding the alleged unfair administration, he denounces a crime against the undivided patrimony of Íñigo Ramírez de Haro and another family business, Ganadera Bornos, “understood as the set of assets, rights and obligations, including reasonable expectations of benefit, profit or credit “.

It points out that “since before the fraud in relation to Goya’s painting was consummated in 2020,” Savial was in the process of dissolution, “without Ms. Esperanza and her spouse having urged her, or liquidated, or bankruptcy proceedings have been initiated. By continuing in commercial traffic generating obligations to the detriment of Mr. Íñigo, his administrator and his accomplice must jointly and severally respond for the payment, for not meeting the duties imposed by company legislation, including that of depositing the annual accounts “.

“Instead of increasing the capital stock, promoting bankruptcy or dissolving the SL as ordered by the Capital Companies Law”, Savial “has absorbed the profits from the farms.” And the marriage, through “financial engineering”, increased the company’s short-term debt to 3.5 million with loans to Aguirre’s husband, while cutting Savial’s bank debt by 4.73 million to 2.15 million. .

This is where the sale of the painting comes into play: to repay this debt with financial institutions, they would have used funds from “apparently, the money obtained through the criminalized legal business around the Goya, whose money is raised and laundered in this way.”

The assets whose “decapitalization” denounces Aguirre’s brother-in-law would be included among the “thousands of hectares of rural farms and an urban property in joint venture with D. Íñigo and other siblings, donated by their parents while alive and / or mortis causa”, and run by the ex-president’s husband since before his father’s death through Savial and Ganadera Bornos.

The complaint cites the Dehesa de Sobrinos farm in Ávila (donated on December 23, 1982), where the former president went hunting in 2012 with the Infanta Elena; the Monte Alcarria farm, in Guadalajara, donated in undivided life by the matriarch of the Ramírez de Haro family to her children, and which includes the farm and farmhouse Piedras Menaras, and the parts called “Alto Pelado” and “La Nava del Peral” ; the assets that make up Ganadera Bornos, of which they are part in addition to Fernando (45%), Íñigo and the other five brothers, 11% each; and a property in Madrid owned by the Ramírez de Haro brothers and a son of the former minister.

Savial is domiciled in the family palace of the couple in the center of Madrid. Its main activity is the cultivation of cereals (except rice), legumes and oil seeds. As shown by the millionaire subsidies collected in recent years, it is still active, but it has not presented accounts since 2014 despite being obliged to do so.

In the latest available it explained that at that date it had 6 employees, assets of 3.61 million and shares listed on the stock exchange for 1.63 million. Due to the accumulated losses (almost 1.2 million only in 2011 and 2012), its equity was negative (an indication of insolvency) at 1.78 million, 50% more since 2011, as reflected in an expert report provided by Aguirre’s brother-in-law, who in his complaint indicates the personal responsibility of the marriage in this “fraud scheme” is “manifest.”

Aguirre assured in 2015 that the check for 5,115,600 euros that, as elDiario.es published then, she had entered in 2012, when she was still presiding over Madrid, in an account that she shares with her husband, it corresponded to “the sale of a patrimonial asset” of this, “which she decided to sell to partially pay a loan “that he had with Banco Santander to” save his company. ” It was the Goya that they sold without protecting it as a cultural asset to save taxes, as this media has now revealed, when simulating a donation that a prosecutor describes as a “book” tax fraud.