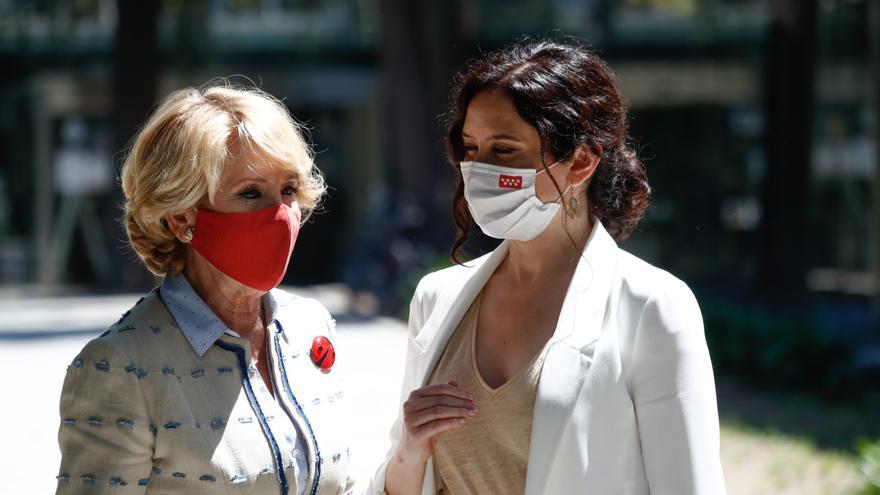 The fratricidal show in the PP has opened a window for several former Madrid presidents to once again give their opinion on the party's current affairs, despite the shadows of corruption that hang over their efforts. Esperanza Aguirre, Ignacio González and Cristina Cifuentes have entered these days into the debate on the internal schism and, although they ask that it be resolved now, they are more concerned about the alleged espionage of the Madrid leader who for suspected irregularities in the contract awarded by hand to a friend of his family.

It does not seem by chance that one of the first to speak after the conflict opened was one of the main supporters of Isabel Díaz Ayuso in recent times. Esperanza Aguirre, who during her years at the head of the Community of Madrid also starred in a confrontation with the national leadership, came out this Thursday to clothe the Madrid president with some praise towards her but above all with an undiplomatic attack on the secretary general, Teodoro García Egea, whom he blamed for the point at which the game has reached.

"It has brought nothing but discomfort and what is needed is to focus on removing this government," Aguirre said, later adding: "If I were in his place, I would resign." The former president herself affirmed this shortly after García Egea's press conference on Thursday, in which the general secretary announced that he would file Ayuso. Aguirre reproached him for making that decision without explaining the reason. “I have listened to Ayuso's press conference and it seemed impeccable to me”, she defended. “Married is debating between paying attention to Teo [García Egea] or ignore it. He doesn't pay attention to me anymore. I would not listen to him, ”he recommended next.

Aguirre also took advantage of his media appearance to criticize one of his former pupils, Ángel Carromero, a PP plumber and, until his resignation this Thursday, General Director of the Madrid City Council. Carromero was one of the mayor's main advisers and a trusted person for Pablo Casado. He is the one pointed out by the information that on Wednesday they spoke about the alleged espionage on Ayuso, organized from the environment of the Municipal Housing and Land Company (EMVS). “Carromero has been a huge disappointment. More than disappointment. I am glad that he has resigned and I hope that he will resign from all the charges against him in the party as well," Aguirre said.

Aguirre feels disappointed now, because at the time she defended the then general secretary of New Generations of the PP in Madrid. Specifically, in 2012, when he was convicted in Cuba of reckless homicide. Carromero was driving the car when the accident occurred in which Cuban opponents Oswaldo Payá and Harold Cepero died.

"For all the friends of Ángel, for all the militants of the PP and for me especially for being the president of the PP of Madrid, it is a day of great joy because Ángel finally steps on Spanish territory", Aguirre said when visiting him in a prison in Segovia, after being transferred to Spain to finish his sentence in national territory. "Ángel Carromero is not a criminal according to Spanish law," he argued then. Her vision of him has radically changed over the years. "There are many chiquilicuatres in the PP, one has already resigned," said this week the almighty former president of Madrid, who is charged in the piece of the Púnica case that investigates the irregular financing of the Madrid PP.

Carromero would have developed a nuclear role in the alleged espionage, which is what has most emotionally affected former President Ignacio González, investigated and prosecuted for corruption. González, who assumed the Government of the Community of Madrid in 2012 after the resignation of Aguirre, has maintained that he was spied on by the same detectives that the plumbers from Genoa wanted to hire to track down the link between Ayuso's brother and the mask contract. .

“I was the object of espionage in 2008 in a follow-up in Colombia. I was followed for a week by this agency that carried out espionage on me and this same agency has not only acted against me at that time but also other leaders of the PP, as evidenced in the cases that are being followed in the National High Court in relation to me, they also turned to them to hire them to investigate me in the famous subject of my attic, which after eight years was archived, "he said.

González refers to the cause he was investigating if Enrique Cerezo gave him a luxury penthouse in the Malaga town of Estepona as a prebend in exchange for the granting of television licenses in the Community of Madrid or profits from the sale to Telemadrid of the television rights of Atlético de Madrid. The case was filed in 2020 after seven years of investigation as the judge could not prove the facts. However, the former president is prosecuted for corruption when he was in charge of Canal de Isabel II and continues to be investigated for his involvement in the Púnica case, the main corruption plot that affects the Madrid PP.

This Thursday, the former leader was very concerned, however, about the "shady services" that they used against him at the time, according to what he says, and that they now also use against his party partner to "question the honorability of people and attack them personally and politically." For González, what surrounds the Madrid Community contract is not as important as the supposed espionage: "What it seems to me is that the story should not focus on that, that without excluding the of the contract, here it is much more important to put an end to these practices of resorting to this type of shady services to generate a type of issue”.

The story of espionage is also familiar to her successor in office, Cristina Cifuentes, who left the regional government in 2018, after a video from years ago was published in which she appeared stealing some creams in a supermarket. Those leaked images were the last straw that ended her political life after months of pressure from the investigation of elDiario.es about the master case. "Yesterday when I saw him at night my stomach turned, because I actually had the feeling that I was living on groundhog day," he said Thursday about the information that speaks of espionage.

The former president has not been as forceful in her defense of Ayuso as Aguirre, but she has recognized that what has happened these days is something "tremendously crazy" and "harmful" for the national leadership of the Popular Party as a whole and for the Madrid leader herself. “[Pedro Sánchez] It will take all day playing the castanets in Moncloa at a time when there has just been an unmitigated defeat of the PSOE in Castilla y León," he concluded.